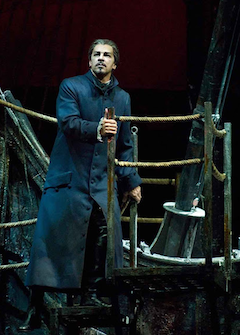 Greer Grimsley returns to San Francisco Opera this week to sing the title role of The Flying Dutchman. Grimsley, a bass-baritone who made his company debut in 2002 as Scarpia in Tosca, returned as Monterone in the company’s 2006 Rigoletto and as Jokanaan in the 2009 Salome. Although Dutchman marks his first Wagner role at S.F. Opera, Grimsley is increasingly in demand as a Wagner interpreter in roles including Telramund, Kurwenal, Amfortas, Donner, Gunther, and, most recently, Wotan, which he sang in Robert Lepage’s “Ring” cycle at the Metropolitan Opera earlier this year, followed by Stephen Wadsworth’s “Ring” for Seattle Opera in August. This production of The Flying Dutchman, staged by Petrika Ionesco and conducted by Patrick Summers, also features soprano Lise Lindstrom, making her San Francisco Opera debut as Senta.

Grimsley, a New Orleans native, lives on the East Coast with his wife, mezzo-soprano Luretta Bybee Wray, and their daughter, Emma.

On a recent rehearsal break at the War Memorial Opera House, he talked to SFCV about his passion for The Flying Dutchman, a role he’s been singing for over 20 years.

So glad to have you back in San Francisco, particularly in this role. It’s been an important role for you, hasn’t it?

Yes, it has. I don’t keep track of numbers, but I’ve sung it quite a bit. It was my second Wagner opera — the first was Lohengrin — and getting to do it for the first time was such a treat, because it was such a contrast with Telramund. I still wasn’t convinced that I should be pursuing other roles in Wagner, but this particular role was a confirmation for me. It fit, it felt good, and through the course of the years, with other productions that I’ve done, I’ve matured into it. It’s always great to have a role that you’ve done so much that it ages like a really good bottle of red wine. It’s taken on all kinds of different facets and, of course, for me, I always look for something different to bring out every time I do it.

The title character is a great mystery — not quite a god, but something more than human. Who is he, in your view, and how have you developed your characterization?

There are so many things to resolve when you play a plethora of gods and demons. It’s getting down to the more-human aspects of it, because I think that’s what we all can relate to. Of course, he is a man who refused to give up and was not going to be denied, not just for himself, but for his crew. And for this he’s cursed. His intentions were good, but he chose a bad path — much like Wotan. He’s a flawed character who is living with the consequences of a very brief shout to the heavens, and now he’s looking to make it end — this interminable search he has, every seven years, to have to do it again.

What are the particular vocal challenges you’ve had to overcome to sing the role?

I never felt I had to overcome anything for this part. But the challenges are to be able to deliver the full-throated revulsion of his fate in the aria, and then to come back and sing this duet with Senta, which is almost like an art song. I think that’s the challenge — and thank God I had a great first voice teacher, and subsequent voice teachers who built on this! — that it’s all based on bel canto singing. For me, it’s the only way to get through Wagner and be able to deliver the parts that need to be bombastic and loud, and also to sing softly.

What are the moments you love most in this opera?

The character is a wonderful, mysterious treat. It’s a gift of a role, and I do love the duet with Senta. It’s beautiful, but it’s not easy. And, of course, who wouldn’t love singing the aria? It’s one of the most famous bits in all of opera. It’s hard to choose a favorite moment, but basically, it’s everything that I sing. People say, “I love Parsifal, but you have to wait so long for this or that scene.” I’ve never heard that said about Dutchman. I think that’s because when Wagner wrote this, or in the midst of putting it together, he was at one of the most vulnerable points in his life. It’s odd, because we always think of him as this stoic, strong, unwavering character. But I think that’s part of this opera. The whole point of him selling the story to a French composer, then writing his own — and I guess violating whatever copyrights there were back then — running away from creditors, ending up in Paris: I think he really related to not having a homeland. You get that sense of vulnerability from the music, and people respond to it. Also, for me, this is the first time that you say, “This is Wagner.” He found his voice with this piece, and that’s really special — but, again, it’s as if he found that voice through his vulnerability.

The Flying Dutchman is a flawed character who is living with the consequences of a very brief shout to the heavens, and now he’s looking to make it end.

And yet he was never completely satisfied with this opera.

No. But it’s interesting — with Lohengrin, after hearing it, he wrote: “Too much brass.” But he didn’t change it.

At this point, it’s still in transition. We’ve been making a few changes in these final rehearsals. It’s quasi-modern, but still evocative of the time. There’s a great use of multimedia, so there are aspects of it that will appear new, and others that will seem more familiar to people.

You’ve sung a great deal of Wagner in the last decade. Why is it a good fit for your voice, and how do you maintain your vocal health singing Wagner?

That’s a great question. Wagner is just a good fit. I have enough of a roundness to my voice, and also a good “ping” in my sound, which helps with dealing with the orchestra. Also, I have a good-sized voice. You can grow into that, and I certainly had potential when I was younger, and grew into it, thank God, with the help of other people. But I think in order to do this repertoire, you have to be somewhat predisposed to the requirements of it. As far as preserving vocal health, it’s approaching it and singing it with a bel canto technique, keeping the suppleness and fluidity in the voice. It’s looking for the most amount of legato in your singing, singing it as lyrically as possible. And understanding that there are times you have to declaim in Wagner, but from a calm and easy place. Instead of trying to “make” it, it’s more of a releasing of the sound. It’s also getting the most amount for the least amount of effort; streamlining so you don’t have to work so hard changing from one vowel to another, understanding your support and staying on it.

For me, this is the first time that you say, “This is Wagner.” He found his voice with this piece, and that’s really special.

Are there particular singers who were models for you in these roles?

A lot of the Golden Age singers. When I was doing my first “Ring” cycle, I studied the American singer Tom Stewart. Hans Hotter, in his younger days; Leonard Warren, George London, Pavarotti, Placido Domingo — when I was younger, these were the guys that I was looking up to. Sherrill Milnes, Jussi Björling, Nicolai Gedda. I didn’t study these singers to imitate them. I never intended to be an opera singer, so when I hit college, that was the first time I had any formal music training. I was working my way through college, at Loyola University in New Orleans, and I would spend a great deal of my free time in the music library, listening to recordings. At that point, I was hooked, and I wanted to know more. My first time on an opera stage, I was still in high school in New Orleans, and I was an extra in a production of La Juive with Richard Tucker and Paul Plishka. That’s what started me on this path. Before that, I was planning to be an archaeologist. Years later, I filled in at the New York Phil[harmonic], in a concert version of Fidelio. The Pizarro was sick. They called me, and said Kurt Masur was conducting. And I said, “I’ll be there.”

Is there still a Wagner role that you hope to sing?

Of course. I’ve come this far, and I would love to have the pleasure of singing Hans Sachs. I’m actually working on it in little bits right now. When I was at Juilliard, we spent a year analyzing Die Meistersinger, and it was such a treat. Because of that, it has a special meaning in my life.

I hope you can do it in San Francisco.

Your wife and daughter have both sung with you. What is that like?

My wife and I were both with [director] Peter Brook in La Tragedie de Carmen, and we went around the world with that production. Doing that, we were neither fish nor fowl — we weren’t on the opera radar, or the acting radar. Actually, I think that was good — there wasn’t the same expectation or pressure on either side. When my daughter was born, she would come with us wherever we would go, and if we were doing Carmen she would be with us. So she got to know the music rather early on.

I remember I was in a production of Carmen in Spoleto; Carlos Saura was directing it, and he saw my daughter and wanted her in the children’s scene. So she made her opera debut at 3 years old. She was officially an extra, and they told the “extra kids” not to sing, but she knew the words. So she started to sing. This other extra, a little boy, grabbed her hand and said, ”No, we’re not supposed to sing,” but she swatted his hand away — she was going to sing! There have been productions of Butterfly when my wife was singing Suzuki and my daughter was part of the extra chorus. When we were in Seattle, we were all in Parsifal, and this last time in Seattle , we were all in the “Ring” cycle together; my wife was a Valkyrie and a Norn, and Emma was an extra in Gotterdammerung. Emma’s in her senior year at Loyola now, majoring in English and minoring in music. She’s a talented writer, and she has an interesting take on libretti and words in opera. She’s been around us all her life, so she knows how it’s supposed to sound.