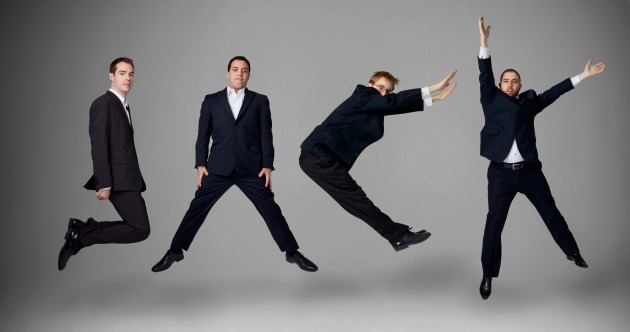 The elevator pitch is this: One hour in utter darkness with the Jack Quartet playing Austrian Georg Friedrich Haas’ spectral masterpiece, Quartet No. 3, In iij. Noct. Each musician will be placed in one of the four corners of the Strand Theater, on March 4. In complete darkness. Absolutely no use of social media devices permitted.

This will the first in a series of four PIVOT concerts that will take place once a week through the end of March.

PIVOT, which is not an acronym, was imagined by San Francisco Performances (SFP) founder and president Ruth Felt. Recently, she was quoted to say, “We’ve been thinking about PIVOT for quite a while as a natural extension of our after-work SALON series, which we’ve been producing for 30 years in one form or another. Our idea was to create non-subscription, alternative programming in the new art spaces emerging in San Francisco, where culturally curious people could gather with different expectations of a performing arts experience.”

The Jack Quartet, which is based in New York, will be followed by the Kronos Quartet on March 11; Sean Jones, March 16, and Third Coast Percussion, March 28.

“Our goal,” adds Christine Lim, SFP’s Director of Artistic Administration and Education, “is to present artists who are actively experimenting with new ideas, repertoire, and ways of interacting with audiences.”

Contrary to what you might think, this is not an effort to target millennials. “Not at all,” says Lim. “We are reaching out to every audience segment. Our interest is in diversity. If we are targeting anyone then it would be those people who are open to new experiences — the so-called creative class that’s supposed to reside in the Bay Area; people who may not think of themselves as chamber music aficionados, but who are curious and might be drawn to the idea of listening to a one-hour concert in complete darkness.”

Lim says that part of the PIVOT charter is to explore the relationship between musicians and audiences, and to build a sense of collaboration between the two.

As for social media devices, while they will not be permitted during the Jack Quartet performance (at the request of the musicians), the same may not be true in other concerts. One of the remarkable aspects of PIVOT is the organic way each of the performances is being offered.

“We want to be as open to what’s possible as we can,” says Lim. “And we start from the premise that we can trust the audience to help us figure out the best way forward. Our role is to facilitate this experience between the artist and the audience, but we also get to have a role in how that exchange occurs.”

While audience development is an endlessly fraught topic these days, Lim insists she is optimistic. “I am certainly well aware of the challenge of keeping the audiences we have, and developing new audiences – this is what we and all of our colleagues in the performing arts are thinking about all the time! But I do stand by my optimism — just because there are so many new ideas about what an arts experience can look like/feel/be, and a lot of questioning of old assumptions that allow for that kind of openness, coming from artists as well as institutions.”