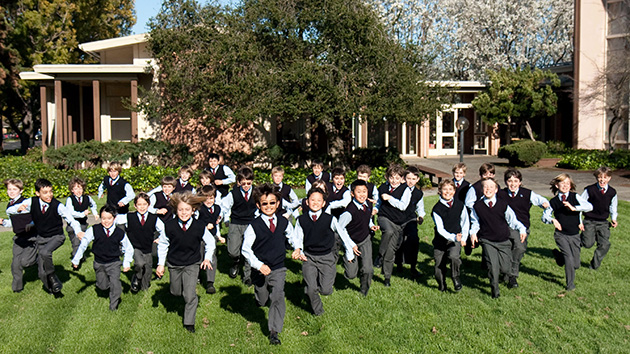 Benjamin Britten’s homage to 14th century miracle plays was Noye's Fludde, the Biblical story of Noah and his ark, but with at least one notable difference from the tempered story you may remember from childhood. In the miracle play, Noah’s wife is an obnoxious drunk and shrew who — along with her friends, the “gossips” — needs every last bit of God’s grace.

Such was the medieval characterization of women by unknown writers of the so-called Chester Miracle Plays, named after the walled city along the River Dee and well known to King Arthur and St. Augustine.

These miracle plays were often performed on pageant carts during village festivals, and included a community outpouring of tradespeople and children. It’s just this amateur spirit that Britten wanted to convey in 1957 when commissioned by a British TV network to do one in a series of films about music making. The show came to America in 1959 and was a great hit.

In 1965, a young Harvard graduate, David Sloss, saw the opera, fell in love with it, and tried to produce a version himself but couldn’t quite pull it off. “I just didn’t have the know-how then,” Sloss told us recently, on the eve of success 50 years later.

Sloss, artistic director of the Fremont Opera, has assembled 150 choristers, musicians, and dancers — nearly all children, save for a core of 10 professionals — in a 45-minute production to be held on Saturday, March 21, at Calvary Presbyterian Church in San Francisco and then a week later, on March 28, at Fremont’s New Life Church.

The choruses include 40 members of the Ragazzi Boys Chorus, under the direction of Joyce Keil, and 32 choristers from the Young Women’s Choral Projects of San Francisco, directed by Susan McMane. There’s also a 62-member children’s orchestra, including players from the Sonos Handbell Ensemble in Oakland, and several dancers from Yoko’s Dance and Performing Arts Academy in Fremont.

“The use of all these children in the orchestra produces a unique sound,” says Sloss, who went on to explain the particular resonance of a dozen kids on recorders. “They won’t be perfectly in tune, but there’s a wonderful effect when used to convey wind or waves in the storm. It’s fabulous. “

Getting this show on the road was a drama all its own. “I realized at the beginning,” says Sloss, “that the first step was to find churches to play in. Britten was very specific that this not be done in a theater; it had to be in a church. The second was to find choruses, and the third was to find a youth orchestra. A year ago, I had all those pieces in place. Then it all fell apart.”

One chorus withdrew from the project. Another took its place, but that lead to transportation problems getting to rehearsals. Then the church in Fremont pulled out. Moreover, the original hope had been that the children’s orchestra would come from one group, but that became impossible, which left the challenge of going around to music teachers who could recommend students.

“It’s been a rocky road,” says Sloss, “but well worth it and this is going to be a terrific show, if only because it is a true community event. Everyone participates. That’s the thing to remember and the reason this isn’t ‘performed in a theater.’ The idea is much closer to a ‘happening.’”

There are two interesting musical nuances in the performance. In the storm scene, the score calls for a big passacaglia, or ostinato pattern; here, a repeating four-bar baseline that provides a powerful austere Baroque element. Another musical point is in the scene when a dove is sent off; the dancer disappears and as she returns all, the music is reversed, in effect played in retrograde.