Dr. Seuss: Music to Forget About Stars, Or One Upon Thars 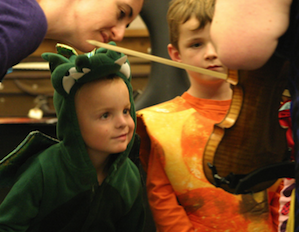 This is Spanish composer and conductor Lorenzo Palomo’s interpretation of the story, written for orchestra and narrator, and is a Northern California premiere. Narration is by Walter Mays (otherwise known as Walt, the Giant Storyteller), a Bay Area actor who made a celebrated performance as Sweeney Todd in last year’s Redwood Symphony production of the Stephen Sondheim musical.

The performance will include slide projections from the Dr. Seuss classic, on which the work is based.

The Redwood Symphony’s conductor, founder and music director is the irrepressible Eric Kujawsky, who has won a growing audience for creating and organizing a local orchestra of the highest quality and at the same time being down to earth. In fact, he’s famous for his jokes.

His standards include: What’s the difference between a musician and a pizza? A: A pizza can feed a family of four. Or, What do you call a musician without a girl friend? A: Homeless.

Kujawsky’s concerts always have an educational aspect (he has a degree from Stanford). The first half of this concert is actually a tour of the orchestra, which is split into its four competent parts: strings, woodwinds, brass, and percussion — each group placed around the building. The audience, in turn, splits into four groups and each rotates among the orchestra segments, enabling children to talk to musicians and get an intimate sense of the instruments. Meanwhile, the musicians play bits from the upcoming concert to give children hints of what to listen for.

After an intermission there’s an hour-long concert, which includes “Mars” and “Jupiter” from Holst’s The Planets. Incidentally, these will be played in their entirety on the November 23 concert.

One of the signatures of Kujawsky’s family concerts is a raffle; the 10 winners receive a baton as well as conducting lessons after the main concert. In this performance, each winner will get a chance to conduct a few measures of a Sousa march.

All musicians will be wearing costumes; the audience is expected to wear costumes as well. If you see a pirate with a baton that would be Mr. Kujawsky.

The two-hour concert will begin at 3 p.m. in the Main Theatre of Cañada College, 4200 Farm Hill Road at I-280, Redwood City. Tickets are available at RedwoodSymphony.org. and cost $10. It’s important to note that while this concert is not free; all other Redwood Symphony subscription concerts are free for anyone under 18.