Elizabeth Roe: The Executor of Risk 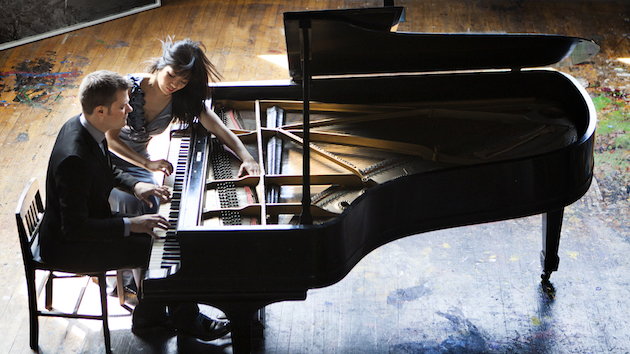 Elizabeth Joy Roe is two hands of the four-hand “piano band,” Anderson & Roe Piano Duo. Greg Anderson and Liz Roe: two millennials from Juilliard who’ve made it big, and as Roe puts it — and humbly — never had to go through the “modest gig stage,” never did weddings and malls, never did “background music,” but went straight to Carnegie Hall.  And then to music videos.

And now here they are after 14 years on the road, in what to her feels more and more like a rock and roll band, certainly not the lithographic world of two sisters in a Jane Austen drawing room, wagging their heads in time to the music and playing the keys like sous chefs sorting through the greens.

In Anderson – Roe’s realm, the choreography alternates between demure, savage; sexual; in the direction of improvisational; sometimes deliberately over the top, and often ambiguous — in the sense that the audience may wonder at the relationship between the musicians. Are they related? Do they sleep together? And if they don’t, what do their partners imagine?

In fact, unlike many duos, they are not married to each other. He’s married; she’s not.

The duo’s conceit is relentlessly pyrotechnical; sometimes literally, as in one of their videos, a maddening montage of splinter cuts, in which they play Rite of Spring on a beach in the dead of night as their piano catches fire and eventually sinks into the sea, and all the while the two musicians seem lost in some musical debauchery. 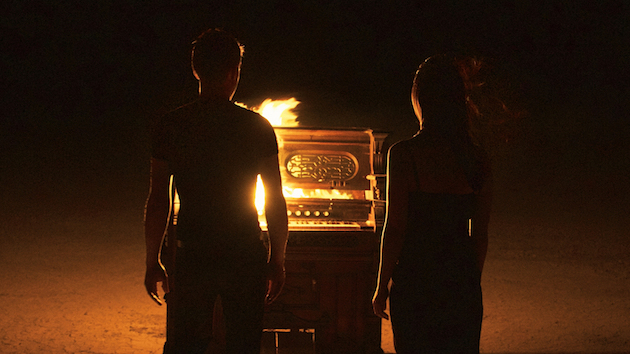 Certainly, very much in the spirit of Stravinsky’s concept for the ballet.

We had a phone chat with Roe the other day as she and her partner prepared for their concert at the new Pitzer Music Center at UC Davis on Friday, September 23. The program includes Mozart / Ferruccio Busoni; Rachmaninoff; Piazzolla; Daft Punk, Pharrell Williams, and Nile Rodgers; György Ligeti; Radiohead; Gluck; and Lennon & McCartney.

Frisson on the Corner of Classical and Pop 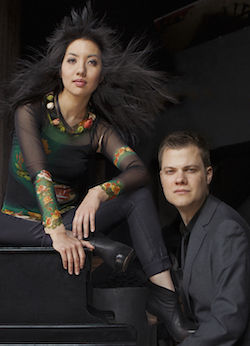 “People want a sense of who the performer is, beyond being an executor of notes,” Roe said at one point — such a wonderful way to put it — and went on to explain that she doesn’t quite know how to define herself as an artist but that music and stage allow her a means to risk, and to explore the layers. One of which is certainly her sexuality, which is portrayed on her website and CD covers as a blend of innocent, enigmatic, and earthy.

“It’s not really intentional,” she said, “although it’s not like I’m not a provocateur in that sense. I love fashion. And I love Beyoncé, for example. I love artists that represent the complexity and fullness of what it means to be a woman. Greg always says it’s hard to define me, because on the one hand I might be cautious and on the other, incredibly intrepid. Onstage I do feel a heightened version of myself, one that is brave and passionate, and that’s really just open. In an odd way, I feel that music leads me to accept and to honor the person I really am.

“I will say that Greg and I are aware of the sexual aspect in our videos and in the duo genre. There is something inherently sexy about four hands sharing this intimate space and of course, a lot of music we play is based on romance, heartbreak, and sensuality. We don’t want to shy away from that. At the same time, we don’t want to define ourselves in a certain way, and while you may know how we interact, or you may know that we’re just friends, or maybe you don’t know — we’re happy either way.”

Roe went on about how her relationship with Anderson is unique, and how they are both very careful not to ignore other people in their lives: “A lot of duos are married and you often hear about how much they argue with each other. But we don’t do that. Of course, we have disagreements but we don’t really argue. We’re both middle children and so are very good at compromise. And just being kind to each other. If we were married it would just be too much, all the time.”

Duo Life on the Keyboard

What’s important, Roe says, is the desire for authenticity.

“Committing yourself to authenticity is risky, because obviously it means being absolutely honest with yourself. And this is something people may not realize about us. Greg and I didn’t start this for ‘entrepreneurial’ reasons.  When we started, people at Juilliard would say to us, ‘Oh you’re so savvy. Instead of just going down the solo route you found this new gig and now you have all these concerts.’ As though we’d created a new kind of circus act.  But that wasn’t it.

“This whole partnership arose out of a pure desire to have a joyful time together, to try new things and just to keep exploring what’s possible with presentation and execution. And the same when we started making music videos; there was no Machiavellian intent. In 2007 we did it as a lark. The idea was let’s just have fun and create an escape. Plus, we didn’t have any money.”

Anderson and Roe produce, film and edit their own videos.

“In the end, we won’t do something if it doesn’t resonate with us personally. We don’t ever want to be bridges. What’s worth risking is what we believe in.” Having said that she added, “The sky’s the limit. I would like to jam with Cold Play.”

As for four-hand technique, Roe says they began with the mission of showing that four hand playing could be dynamic and virtuosic, worthy of a grand concert stage, and that while there was a dearth of exciting repertoire they could make their own arrangements, which in turn lead to the challenge of resisting territorial instincts and giving up the keyboard to each other.

“First of all, it’s just uncomfortable, because you feel restricted. For example, a lot of Schubert is very challenging because the primo person’s left arm is right flush up against the secondo person’s right arm. It’s hard to execute. So we thought, why not go into the other person’s territory? Yes, it requires a little more choreography and you have to work out how one arm has to go over the other person’s arm, this hand and that wrist, but it works.  And that’s because we’re really comfortable with each other and we share a huge sense of play.”

She told about the time they created a fantasy based on Papageno’s love-sick aria, “Ein Mädchen oder Weibchen” from Mozart’s The Magic Flute. “And because the music was very flirtatious and humorous we literally created a kind of musical twister without hands. And so there is this intentionality for getting in each other’s way. But it’s not virtuosity for the sake of virtuosity.”

Roe’s favorite classical music includes the cello movements from Messiaen’s Quartet for the End of Time and the cavatina movement from Beethoven’s Op. 130 string quartet. “That touches me at the core. And I love the voluptuousness of Rachmaninoff. The truth is, I’m not elitist. I love it all. And whatever you like doesn’t have to be arcane. Nothing is black and white or right and wrong. It’s what goes beyond the music, what resonates with the most truth and authenticity for yourself.” 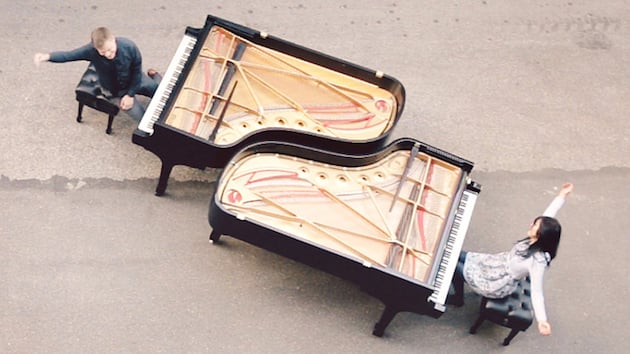