The Kronos Quartet launched its three-year collaboration with the Yerba Buena Center for the Arts on Friday night with a two-hour program filled with politics. Of the five pieces, four were politically charged, from war in Iran to war in Vietnam, from the struggle for gay rights at home to the struggle for the sanctity. 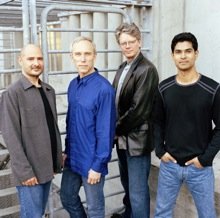 First on the concert was Sahba Aminikia’s String Quartet No. 3: A Threnody for Those Who Remain, followed by Ingram Marshall’s Fog Tropes II, an arrangement he made for Kronos of his earlier brass sextet of the same title. Then an old Kronos collaborator, Aleksandra Vrebalov, was represented by spell no. 4, for a changing world. The last piece on the first half was All the Rage by Bob Ostertag, and the second half was occupied by Kronos' new staging of George Crumb's classic Vietnam memorial piece, Black Angels.

Aminikia, a current student at the San Francisco Conservatory of Music, was co-commissioned to write his piece by Kronos and the YBCA. It was motivated by the loss of his father in a car crash in Tehran, and his return trip home. The first movement dealt with memories of his childhood during the Iran-Iraq War. The second confronted nightmares he had during his return trip, and the third reflects his stay in Tehran.

The string writing was exquisite throughout, allowing Kronos to shine as an ensemble. Aminikia also used electronics (such as riot sounds and other aggressive sounds) to tell the story, but these were not well-integrated, musically. They told the political story, not the musical one about loss and grief.

Marshall’s original Fog Tropes flawlessly integrates the sounds of the San Francisco Bay Area, particularly the foghorns, with the brass quintet, so much so that it is hard to tell where the instruments begin and the electronics end. Fog Tropes II, surprisingly, accomplished a similar feat. The string quartet version never felt like a failed brass sextet; instead it fleshed out its own sound world, and found its own way of meshing with the fog horns and sea gulls. Perhaps because it was devoid of politics and instead dealt with a world I was familiar with, it managed to perform music’s most sacred act and sensitized me to the world I live in.

Vrebalov's spell no. 4, for a changing world was written as a birthday present for David Harrington, of Kronos. It opened up a soundscape that was bizarrely haunting and beautiful. The instruments stayed primarily in a higher register, and were balanced against electronic sounds of shells and broken glass. The constant crunch of the electronics served as an excellent counterbalance for the string players’ fluid effects. The real breakthrough in the piece, though, was Vrebalov’s incorporation of a choral piece she had written 20 years ago. As this peaceful chorale came in, the electronic sounds and the string quartet maintained their presence, allowing the choral piece to be not so much a resolution, as the possibility of one.

Ostertag's All the Rage was, according to the composer, “developed from a recording I made of a riot in San Francisco in October, 1991, which followed California Governor Pete Wilson’s veto of a bill to protect gays and lesbians from discrimination.” The libretto, by Sara Miles, read aggressively by Eric Gupton, includes lines like “a guy drives by with a semiautomatic rifle and opens fire, screaming, 'Faggots die.'” “The first time someone really tries to kill me. With a knife like they tried to kill Julio, a baseball bat like they did Jo, a bottle like Vickie, a two by four like Matt, a fist a fist a fist a foot and a fist.”

The most interesting musical detail was the cello matching the vocal inflections from the narration. It was a bizarre and incredibly engaging modernization of Steve Reich’s Different Trains (in which a similar technique is used, but with much shorter and more clearly musical phrases). The string quartet itself was incorporated seamlessly into the texture — expanding the electronic sounds of the riot with strings gone wild and firing off, imitating shouts, breaking glass, and chants from the crowd.

In the scores of his pieces, Crumb famously incorporated mild optional stage directions. The idea has come round again, with a gaggle of new music ensembles that do it, like Eighth Blackbird and Alarm Will Sound.

While the music and performance of Black Angels was spectacular, the staging itself was less so. The performers stood equidistant from each other, and came together whenever they had matching musical material. Since the material primarily changes hands between movements, instead of dynamic choreography during sections we saw awkward bumbling between sections, an unnecessary distraction. When the instruments were not being played, they were suspended from wires in midair. While the visual image was cool, the act of getting them there was laborious, and once there, the instruments swayed. The other grand staging idea was to have the wine glasses that are used later in the piece covered and then dramatically revealed and suddenly illuminated, a gesture that was cheap theatrics.

If your eyes were closed, or were not distracted by the staging, this performance was musically stellar. Every passage bit or purred as it should, shouts of numbers in various languages came across as the curses and railings of men turned mad. The wine glass music was flawlessly reflective of heaven, with the cello’s half-melodic tunes struggling in vain to reach it. We end, as is common with Crumb, not with transcendence or with damnation, but with striving.