Coppélia arrived at the War Memorial Opera House Saturday looking like it has always belonged there. 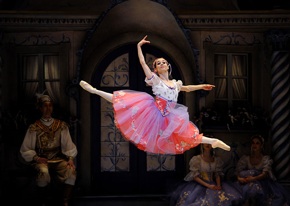 And it’s true that this 1870 ballet — with its long-lost original choreography by Arthur Saint-Léon, and its long-beloved score by Léo Delibes — has deep connections to the San Francisco Ballet of today. Coppélia was the first full-length ballet that S.F. Ballet founding father Willam Christensen staged here, back in 1939 when the company was the San Francisco Opera Ballet. It’s also a ballet dear to current Artistic Director Helgi Tomasson, who danced Franz in the version of the work choreographed by George Balanchine and Alexandra Danilova in 1974. Tomasson had long wanted to bring that Coppélia to San Francisco, but he assumed the Balanchine Trust would require reconstructing the 1974 sets and costumes, making the project too expensive. Then another former New York City Ballet dancer — Peter Boal, now head of Seattle’s Pacific Northwest Ballet — called and said he’d been told new sets and costumes were permissible, and would S.F. Ballet like to share the production and split the costs?

Answering “yes” must have felt as natural as it has proven smart. Saturday’s premiere, staged with keen attention to detail by Judith Fugate, was delightful from start to finish. If audience reaction seemed warm rather than wild, that speaks to Coppélia’s mood of gentle enjoyment and its ease of fit on these dancers.

With all the emphasis on Balanchine as a “plotless” choreographer, dance lovers often overlook the gift that powers the inherent drama of his larger oeuvre of abstract ballets: his skill as a storyteller.

In this Coppélia, which he and Danilova based on her memories of Marius Petipa’s 1884 version at Russia’s Maryinsky Ballet, the first thing our heroine, Swanilda, does after her entrance is deliver an extensive passage of mime. “That pretty girl sitting on the balcony with a book,” she seems to say, using only gestures and facial expressions — “is she real or a doll? I hate her!” Then she hides as her boyfriend, Franz, arrives on the scene, and delivers another long mime passage. “There’s a beautiful girl and I love her!” he indicates, and we understand he’s speaking of Swanilda. Then he points at the motionless girl on the balcony (or is she a doll?) and repeats the exact same mime passage with equal ardor. On Saturday, this got a big laugh.

And so Balanchine, the choreographer who famously made the point that there are no stepmothers in ballet, nevertheless delivers a complicated plot seamlessly, particularly in the engrossing Act 2. This is the act in which Franz and Swanilda, unbeknownst to each other, both break into the dollmaker Dr. Coppelius’ shop, and further shenanigans lead everyone to see Coppélia is only a doll. The whole act is nonstop story, and Saturday it came wondrously alive, thanks to Damian Smith as a very lonely, very desperate, oddly lovable Dr. Coppelius.

Yet this Coppélia offers purely formal choreographic rewards, too, because of Balanchine’s irrepressible logic with ballet steps and his sensitivity to the music. I can’t tell you how much of the choreography in this production derives from Petipa, and how much from Balanchine. I can say that in the Act 1 dances for
Swanilda’s friends I thought, My goodness, everyone has such clear second-position feet in the air during those glissades, I wonder if they specially coached that? And then as the dancing went on I realized those second-position feet were made crystalline because that entire dance series is built around second position, escalating into ever more surprising glimpses of second position (feet held apart, just outside the hips) embedded within the increasingly tricky fast jumps of Swanilda’s variations. 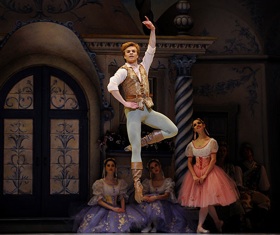 And then in Act 3, there was second position again, with Franz landing his celebratory tours with feet apart instead of tight in fifth — rare for that step.

It should be noted that several of the virtuosic dance passages in Act 3 are interpolations (including a male solo that Balanchine lifted straight from his preexisting Delibes ballet La Source). And Balanchine made quirky decisions about what to keep, as well as what to add. Right after Franz and Swanilda marry, just as we’re ready to dance off to happily ever after, in blows a storm bringing discord and war: Elana Altman and Hansuke Yamamoto leading 16 muscle men and Amazonian women. Most Coppélias cut this, and I would have been happy if Balanchine had, too. But I don’t think anyone could object to his dazzling deployment of 24 little girls, all seemingly between the ages of 7 and 10, all in pink and led by the grown-up, gracious Courtney Elizabeth. A finer example of Balanchine’s great love of children in ballet (inspired by his boyhood glimpses of the Maryinsky’s Sleeping Beauty) would be hard to think of.

Saturday’s cast was simply terrific. Maria Kochetkova has just the right technique for Swanilda: precise and light, fast and free. She landed jumps onto the tips of her toes like a bird alighting on a branch. Gennadi Nedvigin was ideal as her Franz, clean in his dancing, unbridled in his boyish sweetness. Another plus for this production is the swift, challenging dancing for Swanilda’s eight friends. All performed beautifully, with Sasha DeSola, Dores Andre, and Nicole Ciapponi special standouts.

Roberta Guidi di Bagno’s airy pastel sets and costumes convey more of a generic fantasyland than an authentic idea of Eastern Europe, where the action is supposed to take place, but the entire scene-scape is lovely. The orchestra (conducted by Martin West) sounded better than I’ve ever heard: crisp and rhythmically driven, especially vigorous on the mazurkas and czardas.

The lead casting this week (these days the S.F. Ballet posts the names in advance on its Web site) also includes Vanessa Zahorian with Taras Domitro and Frances Chung (her first time dancing lead in a full-length ballet) with Vitor Luiz.

Surely this is a “Coppélia” that we can look forward to enjoying in San Francisco for many years to come.