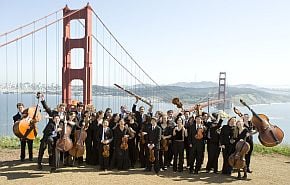 He opened with John Adams’ “The Chairman Dances,” an excerpt from his opera Nixon in China. That was followed by the Fantasia on a Theme of Thomas Tallis of Ralph Vaughan Williams, and, after intermission, Tchaikovsky’s Symphony No. 5 in E Minor, Op. 64. The large audience ate it all up with relish, ignoring the problems in favor of the splendid playing by the young musicians.

Easily, that amazing playing shone most elegantly in the expressive fervor of the Vaughan Williams masterpiece. Tallis (1505-1585), who managed to keep his head during the reigns of Henry VIII, Edward VI, Mary I, and Elizabeth I, was able to assimilate his music through the labyrinth of shifting 16th-century English religious politics.

Tallis began his career by setting Catholic texts, and later became the first Englishman to compose music specifically for the Anglican liturgy. Even so, in his latter years, vestiges of his Catholic background remained, notably in his use of the old Catholic Greco-Roman modal scales. As the cliche goes, “You can take the boy out of the church, but you can’t take the church out of the boy.”

Vaughan Williams chose one such Tallis piece in the Phrygian mode, a setting of a text from Psalm 2, “Why do the heathen rage?” The composer set the words for string quartet and double string orchestra; on Sunday, the first (and larger) of the double orchestras was seated behind the solo quartet, the second (smaller) one on risers behind the full ensemble. This made it an uncommonly interesting piece to see, as much as it provided beautiful, quasi-antique music to hear.

The performance went beyond mere accuracy to project a miraculous emotional depth. Maturity abounded amid the various groups, and beautiful balances, as well. Over the years, I’ve experienced professional performances of this work that failed to reach such a level. I should especially cite the warm sonics in the solos of violist Kevin Hsu and cellist Mariko Wyrich.

Ladling on the Romanticism 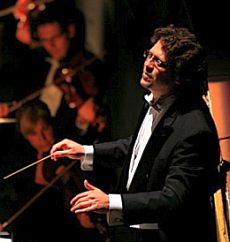 Tchaikovsky’s Fifth Symphony also received a fine performance, as Cabrera laid on its Romanticism in heavy doses. That I found extreme during the first two movements. The main body of the first movement is marked “Allegro anima” — that is, a spirited (or animated) allegro. Cabrera’s tempo was too stately and, frankly, soupy. Lots of juice and slowish tempo also dominated the famous slow movement. The basic music is emotional enough that it really doesn’t need to be hyped.

Then it was as if the sun appeared. The audience heard perfect performances of the waltz movement and the zesty dance music of the finale. The entire work was effective, if a tad tedious in spots. Still and all, the musicians played their hearts out, and bravos for that.

“The Chairman Dances” is one of those reiterative essays that follow the minimalist school. As usual, various orchestra effects are employed, such as sandpaper scraped together, and other unusual percussion oddities. For me, the tediousness of such repetitions was overpowering, and sounds dated. Minimalistic music was a fad born in the 1960s whose time has passed, if not as throughly as “musique concrete” — electroacoustic music. (An encounter with that these days is like a visit to an anthropological dig.)

Apart from instrumentation, a listener can easily get the feeling that he or she has heard the piece before. It all sounds like a vague rip-off of the one sturdy minimalist composition, Terry Riley’s In C. That remains likeable because it’s in aleatoric notation, and hence is always semi-improvised. The result is that it is never exactly the same, which remains a fresh experience of sorts.

“The Chairman Dances” is basically fast in tempo and noisy, and the young musicians played it with gusto. That produces excitement enough for many, though not for me. This is undoubtedly a grievous character flaw, but I’ll admit that I’m allergic to monotony. During the performance, I kept wishing I had brought something to read.