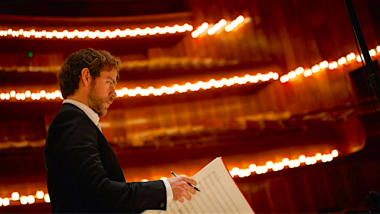 California is currently seeing a lot of East Coast composer/guitarist Bryce Dessner — best known to many as a member of the rock band, The National. Invited by Esa-Pekka Salonen to become one of eight “creative collaborators” with the San Francisco Symphony, Dessner was just in the city to produce and perform in an evening of works for dance (with the L.A. Dance Project) that he curated for the orchestra’s SoundBox series. Now, he heads south.

On March 5, Dessner’s multimedia opera, Triptych (Eyes of One on Another) inspired by the life and photography of Robert Mapplethorpe, will receive its premiere performance (in concert form) conducted by Sara Jobin. Directed by Kaneza Schaal, the work features a libretto by Korde Arrington Tuttle with additional poetry by Patti Smith and Essex Hemphill, video by Simon Harding, costumes by Carlos Soto, and lighting by Yuki Nakase. It’s produced by AtKtype.

Triptych will be performed by the Los Angeles Philharmonic’s New Music Group and the choral ensemble, Roomful of Teeth. Following its concert performance, Triptych will be presented in a full staging in multiple locations including the University of Michigan in Ann Arbor, Brooklyn Academy of Music, Cal Performances in Berkeley, Stanford Live, the Adelaide Festival in Australia, the Kennedy Center, the Barbican Centre in London, and the Holland Festival in Amsterdam.

I spoke with Dessner as he prepared for his SoundBox performance.

When did you first become aware of Robert Mapplethorpe?

How did you define what you wanted the piece to say in this work about Mapplethorpe and his art?

When I started, I really didn’t have an agenda as to what the piece should do or say. I just knew that collaboration was going to be a big part of it, and I really wanted to work with Roomful of Teeth.

My initial interest in Mapplethorpe was as a classical artist, his fascination with Italian Mannerism which you can see in a lot of the photographs. That was my initial interest. That led me to doing research at the Getty Museum in Los Angeles that has the Mapplethorpe archive. I had access to such a wealth of material that I’d never seen before. I came away with a much deeper sense of him and his work. Mapplethorpe’s photographs were the doorway that me and my collaborators walked through, but the piece has grown into something bigger than that. It’s taken on a more poetic shape. It was my librettist, Korde Tuttle, who gave the work its three-part form. We also include poetry by Patti Smith [who had a long relationship with Mapplethorpe and was often the subject of his work] and Essex Hemphill.

The piece is called Triptych. How do its three parts relate?

As I said, I was attracted to Mapplethorpe’s interest in Italian Mannerism. So the piece starts with my reinterpretation of a Monteverdi madrigal set to the words of Patti Smith’s poem “The Boy Who Loved Michelangelo” that she wrote for Robert. The second section is about something I didn’t know we were going to get into when we started to work on the piece three years ago. It’s related to my own personal experience growing up in Cincinnati and is based largely on testimony from 1990 when, essentially, art was put on trial. But the piece is not in any sense a linear narrative. We don’t have singers playing parts but there is exact language from the trial. The third section is completely different. It was something Korde wanted to do. It investigates and re-examines the way Mapplethorpe depicted black men.

How did the work’s musical vocabulary evolve?

The piece has three or four different musical ideas that are predominantly carried by the voices. There are 10 singers on stage: the eight members of Roomful of Teeth, plus a soprano and tenor. Working with Roomful of Teeth gives you so much interpretive space. They’re able to add so many vivid vocal textures. They can make the same phrase sound like a scream or a sigh, a whisper, or some guttural grumble. I’ve also been able to rewrite a lot of the music based on their feedback.

The piece has different musical guises that it puts on. The first is the reimagining of the Monteverdi madrigal, which serves as a jumping-off point. There are sections that are more vernacular, including a reinterpreted gospel song and sections that sound like 18th-century American folk music with antiphonal parts. There are several settings of key poems by Patti Smith and Essex Hemphill that are more virtuosic. There is a section of spoken dialog with pulse and three of four sections that involve complicated mixed meter. I like to think it’s fairly diverse.

What is the instrumentation?

Triptych will be performed at Disney Hall in Los Angeles in a concert version. How much more complex will the fully staged version be?

We will have projection images in Los Angeles but there won’t be a set. The staging will be pretty limited. The fully conceived version will include a dance/movement element and a more immersive visual scheme. The idea is to allow the audience a chance to experience the photographs in a way they couldn’t from a book or in a gallery. There’s much more emphasis on the duration of time you see the images and their size. After L.A., our next performance will be at the University of Michigan in Ann Arbor. That will be the first full staging. I’ll be really interested to see how it looks.

Guitarist Bryce Dessner of the indie rock band The National is also an indie composer for classical ensembles like the Kronos Quartet, a record producer, a collaborator with other artists, and even a little bit of an impresario.

The operatic adaptation of E.M. Forster’s novel boasts some winning songs, well-delivered. But is that enough?