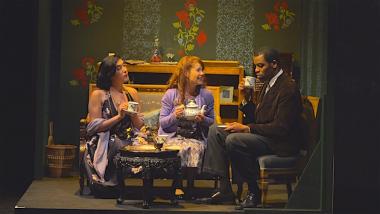 E.M. Forster’s Howards End is making waves: first a television mini-series in 2018, and now an operatic adaptation staged at Z Space by Earplay in partnership with RealOpera. The novel has the double allure of a refined air and a potboiler plot. In turn-of-the-century England, the sensitive and idealistic Schlegel sisters (Helen and Margaret) mix with the successful, capitalist Wilcoxes (Henry, his ailing wife Ruth, and their son Charles) and the poor Basts (Leonard and Jacky). A disregarded dying wish, a long-forgotten affair, and an out-of-wedlock pregnancy lead to a dramatic climax at Howards End, Ruth Wilcox’s beloved country house.

The book feels very English, but its operatic resetting to 1950s Boston works surprisingly well. The outsider status of the Basts becomes more about race than class. The Schlegels are liberal do-gooders; the Wilcoxes believe in a world of hard-working winners and lazy losers. Claudia Stevens’s libretto magnifies these differences to the point of caricature. Charles Wilcox delivers racist, sexist, uncaring rants. Helen’s invasive photography and ready laugh come across as ditzy rather than artistic. The abbreviation of the story takes the sense out of important relationships: Why did Ruth and Margaret connect so deeply? Why does Margaret agree to marry (and forgive) Henry Wilcox?

Allen Shearer’s score is full of whimsy, from the chaos of the opening rainstorm to the bittersweet end. Howards End, America includes a spoken-word chorus of bank tellers, sung birthing pains, and an orchestra pretending to be a jazz radio station (changing their volume as characters adjust the dials). Led by Mary Chun, Earplay delivered the score with playfulness and verve, filling the space without overwhelming the singers. Unusually for contemporary opera, Howards End, America is full of arias, some jazzy, some lyrical, some atonal. The men’s pieces are most singable and dramatic; Shearer has a habit of parking the sopranos on high notes, delivering beautiful tone at the expense of melodic interest.

Leonard Bast gets the best music: an intro aria with a jaunty beat and impressive coloratura runs, and an (almost) death aria full of power and despair. Tenor Michael Dailey’s creamy sound and humble, steely presence fit the part perfectly. As played by Candace Johnson, Leonard’s wife Jacky was a vivacious singer with a full, ringing sound and great scatting skills. With such energy and voice, it was hard to credit that her character was a washed-up failure. Nikki Einfeld sang steadily and smoothly as the earnest Margaret Schlegel, and Sara Duchovnay sparkled as her flighty sister Helen. Playing Henry Wilcox, Philip Skinner was announced as ill, but the occasional strain in his crackling voice didn’t detract from his commanding presence. Daniel Cilli’s Charles dispensed bile in a rumbling baritone.

The production team — director Philip Lowery, lighting designer David Robertson, and videographer Jeremy Knight — made excellent use of Z Space. A clever combination of platforms, doorways, and projections created a separation between the Wilcox and Schlegel households and let the setting switch easily between indoors and outdoors, Boston, and Howards End.

The lingering phrase of both the novel and the opera is Margaret Schlegel’s repeated plea: “only connect.” On the surface, the opera is full of connections — one character’s apparently small choices can ruin another’s life. But the flattening of personalities, character arcs, and relationships in this adaptation means these connections lose their depth. Ultimately, that undermines the most important connection of all: the opera’s emotional connection with the audience. Howards End, America is smart music, beautifully sung, but it’s not a moving piece of theater.

The Bay Area premiere of Verdi’s family tragedy does a neglected score justice.