Next month the U.S. Supreme Court will rule in the case of Golan v. Holder. The case was originally filed in 2001 as Golan v. Ashcroft, and has been recaptioned several times as new administrations and attorneys general came and went.

In the Bleak House history of copyright law, Golan is but one bleak hall of legality. This particular case is about whether the U.S. Constitution allows for copyright protection of foreign works to be restored to works that previously had been in the public domain.

The lead plaintiff is Dr. Lawrence Golan, who was at the University of Denver when he first got drawn into the case in 2001, and who now heads the Yakima Symphony in Washington. He says he has become optimistic. “A couple of months ago I was thinking the odds were 50–50, because it depends on what the court decides to rule upon. If it were simply a matter of right and wrong, and common sense, then we would win, but if the court looks solely at constitutional technicalities then we may not.

How do you define the “public good” and how much is it worth and to whom?

“Even with the technicalities,” Golan adds, “the case can barely be argued. It’s all but 100 percent clear that the Constitution, if not explicitly, certainly implies that once a work is in the public domain it cannot be taken out.

“At this point,” in mid-September, “I would say the odds are about 70 percent in our favor.”

Public Domain and the Public Good 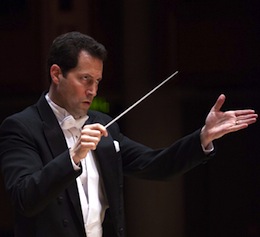 At stake in all this, you could argue, is the value of literally millions of pieces of artistic expression, as well as the vitality of culture itself. At risk, for musicians, are first and foremost the works of composers in the former Soviet Union, such as Prokofiev and Shostakovich, whose music was composed during the Cold War when the U.S. did not recognize Soviet copyrights. An American orchestra could own, instead of rent, the parts for a Shostakovich symphony without paying royalties for each performance it gave.

Yet the crux of the matter might be cast as the public good versus the rights of an individual, albeit a creator. That’s what this case is forcing many people in the sleepy hollows of the classical music industry to think about: How do you define the “public good,” and how much is it worth, and to whom?

In its broadest significance, Golan v. Holder affects many people, not just the creator or composer, as well as his or her heirs, but all the people who live off the creation: the publisher, the copier, the musician, the teacher, the academic, the distributor, and the many who work for arts organizations that perform the work. Some of these groups benefit from copyrighted material, while others benefit from works in the public domain. Many benefit from both. A professional who has written a book or a score would like to receive royalties, but that same person, when teaching others, would benefit from unrestricted access to cheaply reproduced books and scores.

Still, a win for the public domain, a ruling in favor of Golan, may not be all to the public good. If nothing else, such a ruling might spark retaliation by Europeans who could conceivably dump a lot of American works into their public domain.

“If we want to do 60 to 80 minutes of music we can’t do three pieces for that amount [$6,000]. You have to make a real mission-driven decision on something like this.” – Christina Littlejohn, the Arkansas Symphony

Among the interested parties is the blue-haired elephant in the room, the audience. Do they care if they don’t hear “the Russians,” or if their children or grandchildren don’t hear live performances of Peter and the Wolf? What does it really matter if the repertoire is smaller? Or shall we say, more objectively, “different”?

“At the end of the day,” points out Kris Sinclair, executive director of the Association of the California Symphony, “there’s just so much literature out there that you really can find something else. I have to say, we’re huge proponents of new music.”

But then imagine that, if this case is lost, and if copyright protection once more trumps the public domain, what would that mean for a local symphony? We might even ask, Why would it matter if this becomes one more nail in the coffin of locally produced classical music? After all, isn’t music subject to the same forces, and free market principles, as mouthwash, or financial derivatives and asset swaps?

“What this would mean,” says Michael Pastreich, president and CEO of the Florida Orchestra, “is that both peripheral and central Russian music would be played less. Why is this important? I believe these ‘warhorses’ are what get the audience to the hall in the first place. Remember, there are two types of people who come to the symphony hall: subscribers and single-ticket buyers. Without the first you don’t have a sustainable base; without the second you don’t get new donors. You need to have programming that speaks to both.

“What people don’t understand is the fact that flagship orchestras depend on the youth orchestra, the college ensemble, the community orchestra. And vice versa. We’re an ecosystem, and if you take away the feeders, the whole system is weakened.”

A Thumbnail History of Copyright Law

In 1886, the Berne Convention established the first international copyrights law. The minimum copyright term of a work was set at the author’s lifetime plus 50 years, which was later extended to lifetime plus 70 years. Up to then, a work or invention was only protected in the country where the copyright was granted.

The U.S. was not a signatory to the original Berne Convention, though Congress passed its own international copyright act in 1891. In 1988, the U.S. did join the Berne Convention, but refused to retroactively confer protection to foreign works that had never received American copyright.

Under severe criticism, U.S. negotiators reversed themselves in the Uruguay Round Agreements Act of 1994, part of the General Agreement on Tariffs and Trade (GATT) diplomacy. The act restored copyright protection to thousands of foreign works.

Since that tremendous defeat, proponents of the public domain have fought back, by focusing on constitutional issues. In Eldred v. Ashcroft (2003), an Internet publisher sued for relief against the Copyright Term Extension Act of 1998, based on the language of “limited times” set out in Article 1, Section 8 of the U.S. Constitution. The case went to the U.S. Supreme Court, which rejected that argument. A lower court then dismissed Golan’s original lawsuit, based on the Eldred ruling.

“The copyright holders of the rental music — the publishers — seem to take advantage of their exclusive position, unilaterally setting rates that price the works out of the reach of smaller orchestras.” – Alan Jordan, Vermont Symphony Orchestra

But then Golan came back and refiled his complaint, arguing a very simple premise: There’s nothing in the Constitution that says Congress can put something in the public domain and then take it out.

This is the fairness issue: If you bought a music score with the understanding that ownership conferred rights to performance, can Congress force you to pay for the same thing again? In 2009, a district court agreed that this portion of the law violated Golan’s own First Amendment rights, so here we are today.

Conditions on the Ground

How will the Supreme Court decision affect midsize orchestras? The Arkansas Symphony Orchestra, for example, is 46 years old and spends about $30,000 a year adding to its library. That’s 1 percent of its $3 million total budget. Although it couldn’t quite balance the books in 2009, the orchestra has broken even in the last two years.

“Thankfully,” says Christina Littlejohn, the orchestra’s executive director, “subscriptions are up, we’re seeing increased attendance — we dropped ticket prices — board member donations are up 300 percent, and both our musicians and our administrative staff took a pay cut. It’s a struggle and we’re looking at every penny.”

Here is a recent dilemma. Following on that orchestra’s goal of providing both excitement and diversity, while honoring living composers — “we don’t want to limit the concert experience,” as Littlejohn put it — the question arose whether the orchestra could rent four copyrighted pieces. Two were by Michael Torke: Lucent Variations (1998) and the American premiere of Mojave, a concerto for marimba. The rental cost for each piece was about $2,000, for two performances.

The other two pieces were Pines of Rome (1924), by Ottorino Respighi, and the “Symphonic Dances” from Leonard Bernstein’s West Side Story. Each of those also rent for about $2,000.

“We’ve made the decision to do Torke,” says Littlejohn, “but now we’re wondering whether we can also do Pines and West Side Story. If we want to do 60 to 80 minutes of music we can’t do three pieces for that amount. You have to make a real mission-driven decision on something like this.” Depending on which three of the four they chose, the total time of the selections would be 60-80 minutes for $6,000. That's $75-$100 a minute on rentals alone for that concert.

Budget reality trumps artistic vision. While many people would think of Pines and Bernstein’s “Symphonic Dances” as standard repertory, they — like Gershwin’s American in Paris (1929), Copland’s Appalachian Spring (1946), Ravel’s Bolero (1929), and many other popular works — are still under copyright in the U.S. Imagine how these constraints affect lesser-known works and composers. You might ask: Why do rental fees have to be so high?

Addressing that question is Alan Jordan, the executive director of the Vermont Symphony Orchestra, which has a $1.5 million dollar annual budget and does 40 concerts a year.

“I share Mr. Golan’s frustrations with expensive rentals of copyrighted music,” Jordan wrote in an email, “but I am not convinced the exorbitant fees are solely because they are not in the public domain. The copyright holders of the rental music — the publishers — seem to take advantage of their exclusive position, unilaterally setting rates that price the works out of the reach of smaller orchestras. Contrary to Golan’s assertion, these fees are more painful than mosquito bites even to the largest orchestras. (The publishers have sliding fee scales based on a number of factors, including audience size, number of performances, etc.)

“That said, the premise of extending copyright protections for creators is not something I am against. Composers, authors, and their heirs deserve appropriate compensation. The question that lingers in my mind is, How much of the rental fee charged by the publisher actually gets back in the hands of the creator or their heirs?

“Bear in mind that live performances of copyrighted works usually require two fees: one for rental of the printed music, and a second to the appropriate performance rights organization (ASCAP, BMI, etc.). The same question raised above holds true for this second group.”

In Part 2, a publisher and a copier make the case for extending copyright laws.