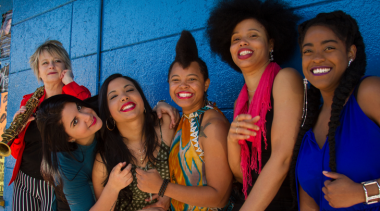 Jane Bunnett didn’t have a particularly ambitious agenda when she set out to record some of Cuba’s rising female jazz musicians in 2013.

But in a moment of self-reflection in 2013, Bunnett realized she hadn’t thought much about all of the young women players she’d seen at Cuban jam sessions, watching their male peers perform rather than getting into the mix themselves. With Cramer’s ardent encouragement (“he produced himself out of a job,” Bunnett says), she set out to connect with the most promising young women on the Havana scene. The result was Jane Bunnett and Maqueque (Justin Time), an album that put Cuban women players on the map.

“I was thinking I’d come down and do a project, a one-off, and that first album was disastrous to pull off,” says Bunnett, 63, from her home in Toronto, which often serves as an extended home base for Cuban musicians. “We recorded in three different Havana studios, and things kept breaking. The music was all over the place. I’d set a high standard with Spirits of Havana and I didn’t know how people were going to react.”

She needn’t have worried. The response to the eponymous 2014 album was nothing short of rapturous. Jane Bunnett and Maqueque won a Juno, Canada’s equivalent of a Grammy Award, and the band’s first tours served as a launching pad for Daymé Arocena, now 28, who has gone on to an international solo career as Cuba’s most heralded young singer. Maqueque drummer Yissy García, the daughter of the founding percussionist of the supergroup Irakere, is also making a name for herself as a bandleader in her own right.

For Bunnett and Cramer, that’s mission accomplished, though eight years into the project Maqueque isn’t slowing down. The group’s third album On Firm Ground/Tierra Firme (Linus Entertainment) is up for a Juno, and the band is logging some serious mileage on the road, with at least three separate visits to the Bay Area this year alone (well, four if you count the New Year’s Eve gig they played at Freight & Salvage).

Featuring Yissy García on drums and vocals, Joanna Majoko on lead vocals, Tailin Marrero on acoustic and electric bass, Mary Paz on congas and vocals, and pianist Dánae Olano, Bunnett and Maqueque return to the Freight on Feb. 26 and play four Stanford Live shows at Bing Studio Feb. 28–29 (producer and music scholar Ned Sublette moderates a free conversation with Bunnett and Olano at Stanford’s Oshman Hall on Feb. 27). Maqueque is back in the spring for shows May 11 at Santa Cruz’s Kuumbwa Jazz Center, May 17 at Half Moon Bay’s Bach Dancing and Dynamite Society, and the Healdsburg Jazz Festival, June 5.

“I hope it continues too,” Bunnett says. “When we started the group, I organized it with the assistance of Daymé Arocena. She was 17 or 18 years old, and I could see she had this incredible potential, an old-soul voice. I thought the timing might be right to put an all-women band together. I reflected on all the times I’d been in Cuba meeting young women musicians and then never seen them out playing. At jam sessions they’d be sitting on the sidelines, seemingly content to watch their boyfriends playing.”

While access to the internet has gradually increased in Cuba, many young musicians still face tremendous challenges getting access to information. Jazz and popular Cuban music aren’t taught in the conservatories and recordings can be hard to find. When jazz caught pianist Dánae Olano’s ear at 16, she plugged into an underground network passing around copies of tunes and recordings. Looking for a way into the scene, she teamed up with Arocena.

“I was curious about Cuban popular music and jazz because it’s my culture,” says Olano, 27. “I would see my male friends out there playing already and exploring the jazz world. I wanted to try it as well. Daymé Arocena and I started together. It wasn’t easy but we got to play one small restaurant in Havana’s Chinatown, but that doesn’t exist anymore. We didn’t know how much we were going to get paid each night.”

Olano has taken full advantage of the opportunities afforded by Maqueque, taking on a leadership role in the band in helping to organize travel and performances. Rapidly developing as a composer and arranger, she contributed three pieces to On Firm Ground and is carving out an independent identity with solo recitals encompassing the history of Cuban popular music.

Bunnett credits San Francisco attorney Bill Martinez with playing an essential and invaluable role in obtaining visas for the women to perform in the United States, allowing the group to answer a rising call for more women players. “We started pre-#MeToo movement,” she notes. “You kind of ride the wave of presenters starting to say, ‘Maybe we should have some more women in the festival.’ We had a really successful year.”

Has Maqueque (which is pronounced “ma-keh-keh” and means “the spirit of a young girl” in an Afro-Cuban vernacular) changed the situation on the ground for aspiring female musicians in Cuba? “The music scene is slowly changing,” Olano says. “No one is going to come to you, come to this club, and you’re going to play. There is part of the macho culture in Cuba that’s still there, but as a woman or any musician if you want to be out there playing, you’ve got to do it. They’ve got to try hard and push.”

For the band itself, the reception back in Cuba has been underwhelming. They’ve yet to be invited to play the Havana Jazz Festival, which often requires pay to play, providing a source of desperately needed foreign currency. The Communist government is once again asking citizens to tighten already constricted belts in response to shortages of fuel, food, and medicine.

“I’m a little disappointed,” Bunnett says. “I’d love to be able to take this group and go across the country. I love the people so much, the musicians and dancers and painters. But I’ve got really complex feelings about it. The women spent yesterday buying soap and pasta at a dollar store to bring home. Things are so tough there for so many people, and you can’t just blame the embargo.”

After three decades doing her utmost to help Cuban musicians break out of the island, Bunnett has succeeded on a grand scale, while the conditions that made her efforts necessary in the first place continue to shadow one of the world’s most musically verdant nations. 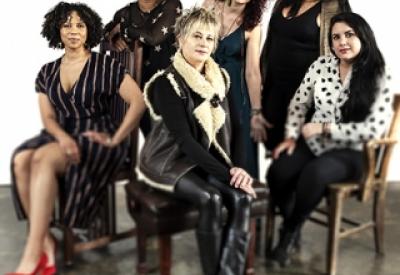