Describing Carmen Lundy as a timeless artist isn’t inaccurate, but it’s more precise to say that she’s both a throwback and a harbinger of jazz’s future. Though she started making a name for herself in the 1980s, Lundy’s voice and sensibility link her to inimitable 1950s jazz singers like Etta Jones and Ernestine Anderson, scintillating originals who hewed their own paths. But in insistently focusing on her original material as a recording artist and performer Lundy is boldly carrying Abbey Lincoln’s singer-songwriter mantle into the 21st-century, pointing the way for jazz vocalists looking beyond the American Songbook.

Though she’s lived in Los Angeles for more than two decades, the Miami native had never performed in San Francisco before last week’s four-night run in the SFJAZZ Center’s Joe Henderson Lab. Judging by her masterly, high-energy first set Sunday night she’s raring to be invited back. Her band couldn’t have been much stronger, combining the veteran tandem of bassist Kenny Davis and drummer Terreon Gulley with rising guitarist Andrew Renfroe and 21-year-old piano phenomenon Julius Rodriguez. 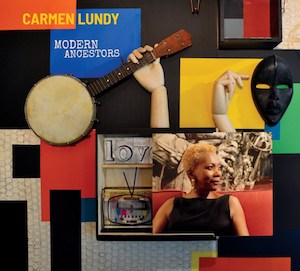 Lundy’s skills as an arranger and bandleader were evident in every piece. With Rodriguez playing subtle orchestral pads on keyboard with his right hand and rippling lines with his left, she eased into “A Time for Peace,” the opening track on her new release Modern Ancestors, her 15th album. The project is described in press materials as an homage to her jazz vocal predecessors, but it’s more a wide angle take on various musical currents nourishing Lundy’s music.

Her pliable voice was strong and clear in all of her registers, and she has a gift for writing inviting melodies. “Jazz on TV,” a sardonic piece on the music’s absence on the tube, is set to a wryly seductive line that could easily be recycled with a new lyric evoking Southland surf and sunshine. But her set focused more on coruscating, high-energy pieces like “Eye of the Storm,” a song evoking the fear and adrenaline-rush of a hurricane.

Even at the fiercest tempos, Lundy’s arrangements leave plenty of space, with Renfroe’s John Abercrombie-ish guitar tone offering a cool contrast as he responded or supported her vocals. Lundy closed with the gospel-powered “Lay My Burden Down,” an impassioned get-’em-out-of-the-pews piece that inspired spontaneous audience call-and-response.

Lundy isn’t a complete stranger in the Bay Area. I caught her at Yoshi’s about eight years ago, which may have been her last performance in the region. But there’s nothing like eight shows over four nights to make an impression. Rather than relying on familiar standards to connect with audiences, Lundy is confident in the strength of her own material, trust that sounded well-placed indeed on Sunday.

The revered jazz chanteuse had a profound influence on the Bay Area music scene.