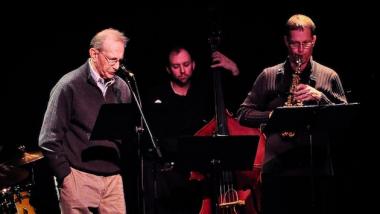 The Poetry of Jazz

Not that long ago, collaborations between jazz musicians and poets had to cut through a thick miasma of Beat-era clichés before reaching a receptive audience. The lineage of jazz and poetry enriching each other runs far deeper of course, springing out of the swinging, blues-steeped verse of Langton Hughes, poems that connected 1920s speakeasys, rent parties, and nightclubs to literary salons. Sadly, the image of a hopped up, beret-bedecked wannabe declaiming impromptu lines in front of a bebop combo has long overshadowed that Harlem Renaissance history.

Caricatures involving bongos, flutes, and goatees might still hover in the background, but in the past few years the profusion of projects featuring jazz composers working with verse by poets both living and departed has turned into a particularly fruitful field for the music. More than having a moment, jazz and poetry are bosom buddies these days, thriving in each other’s company outside the glare of popular culture. Part of what makes the present jazz/poetry frisson so potent is that there’s no particular formula guiding the various projects. A thousand flowers are blooming, and the verdant field looks unbounded.

No jazz poetry project has blossomed quite so spectacularly as New York drummer/composer Matt Wilson’s Honey and Salt: Music Inspired by the Poetry of Carl Sandburg (Palmetto), one of 2017’s most acclaimed albums (ranking No. 8 in the NPR Music Jazz Critics Poll). Long drawn to the work of the fellow Illinoisan, Wilson created rambunctious, loose-limbed songs out of a half- dozen poems by Sandburg, the three-time Pulitzer Prize winner who died in 1967 at the age of 89.

A founding faculty member in the San Francisco Conservatory’s Roots, Jazz, and American Music program, Wilson has toured widely with the resulting Honey and Salt ensemble, a group that returns to the Bay Area for a Feb. 21 performance at the Hammer Theatre as part of San Jose Jazz’s new Black Cab Jazz concert series. Reflecting Wilson’s love of engaging the audience, Honey and Salt is a work in progress. For concerts, the drummer often recruits musicians, friends, and even music critics to recite Sandburg’s poems with the band.

In many ways, Fresno saxophonist/composer Benjamin Boone is in the vanguard of the jazz/poetry movement. Last year he released his captivating collaboration with the late Pulitzer Prize-winning poet Philip Levine, The Poetry of Jazz (Origin), which garnered glowing praise everywhere from The Paris Review to JazzTimes and Downbeat. He followed up in January with The Poetry of Jazz, Vol. 2 (Origin), another musical excursion into the heart of Levine’s work that was recorded during the same sessions that produced the first album. Levine, who died in 2015 at the age of 87, was one of America’s most celebrated poets, earning the National Book Award for Poetry twice, and the Pulitzer Prize for Poetry for his 1994 volume The Simple Truth. An avid jazz fan, Levine found an ideal musical collaborator in his fellow California State University, Fresno professor, whose music is as emotionally direct, unpretentious and irascibly open-hearted as the poet’s verse.

While the collaboration with Boone marked a new chapter for Levine, Dana Gioia, the poet, former NEA Chairman, and part-time Sonoma resident had a long track record of collaborating with composers of all stripes before he started working with New York jazz pianist Helen Sung. After meeting at a White House event where Sung performed, they struck up a friendship that led Sung to try setting several Gioia poems to music. They ended up writing songs together, material documented on the 2018 album Sung With Words (Stricker Street Records). Written for a jazz ensemble, the music draws on pop craftsmen like Stevie Wonder and Earth, Wind & Fire. “I didn’t have a method,” Sung told me. “I let each song direct me. Sometimes that took forever, and sometimes I’d start panicking. I was so grateful when the inspiration came.”

Where that project evolved out of a specific relationship, Brazilian vocalist/composer Luciana Souza has spent much of her career setting verse of departed writers to music, focusing on poems by Elizabeth Bishop and Pablo Neruda. Her latest album, 2018’s breathtaking The Book of Longing (Sunnyside), features her songs based on the work of Leonard Cohen, Edna St. Vincent Millay, and Emily Dickinson, and like her previous releases, the music carries the unmistakable rhythmic DNA of her homeland.

Hands down, my favorite album of 2019 is the singular jazz/poetry collaboration between Berkeley clarinetist/composer Ben Goldberg and poet Dean Young, Good Day for Cloud Fishing (Pyroclastic Records). Goldberg made his first major foray into setting text to music with his sumptuous song cycle Orphic Machine (BAG Production Records), which was released in 2015. An almost through-composed work drawn from the writings of critic and poet Allen Grossman, the project featured a gaudy collection of musicians, including guitarist Nels Cline, trumpeter Ron Miles, and violin and vocals by Goldberg’s Tin Hat bandmate Carla Kihlstedt.

Cline and Miles also join Goldberg on Cloud Fishing, a series of dreamscapes featuring a distilled trio playing tunes inspired by Young’s epigrammatic poetry. Goldberg includes 12 cards in the CD box with the poems that inspired the tunes, and taking another turn on the roundelay of influences, Young was in the studio as they recorded the pieces, writing a new poem inspired by the music (each “exit” verse is featured on the back of the card with the initial “entry” poem). Rather than trying to illustrate Young’s verse, Goldberg approached the collaboration informed by Albert Grossman’s dictum that his text was “intended like a poem to give rise to thoughts about something else.”

“I’m totally nuts about the poems of Dean Young,” Goldberg says. “I thought about trying to use some of his poetry in songs, but there are a lot of words and they go off in all different directions. I didn’t think I could make music that would help those poems. When I read them, it gives me a feeling about life. If I right away write down the first tune that come to mind it really felt like I was participating in the spirit of the poem that I loved.”

The San Francisco percussionist, DJ, and poet Avotcja has become a regular presence at the Electric Squeezebox Orchestra’s California Jazz Conservatory residency on Sunday afternoons. She recites her poem on the title track of the band’s excellent new album Matter Is (doubleOone Records) and performs with orchestra at the CJC on Oct. 27. She’s one of many jazz-steeped writers who embody the deep and abiding ties binding Bay Area poets and jazz artists.

Another jazz insider, former San Francisco Poet Laureate Genny Lim, has spent much of her career as an activist and artist performing with jazz musicians. As a poet, she gravitated toward writers like Federico Garcia Lorca and Pablo Neruda, and found her own voice as a writer by incorporating the cadences of Chinese folk songs and Peking opera that she grew up with. She credits Bay Area jazz innovators like pianist Jon Jang and saxophonist Francis Wong, with whom she performs Sunday afternoon, Oct. 13 at San Francisco’s Bird & Beckett Books and Records. She’s celebrating the release of her new book of poems evoking jazz legends such as John Coltrane, Billie Holiday, Sun Ra, and Billy Higgins, each represented by a Nina Mera linocut.

For Oakland jazz vocalist Lisa B (aka Lisa Bernstein), creating an album setting her own verse to music completed a journey that started on the page. Long before she began performing as a singer, she toiled as a poet whose work was published in a number of respected literary journals. When she turned her attention to singing she often wrote her own material and gradually incorporated spoken-word passages into her performances. Her new album, Reverberant: Poems & Music (Piece of Pie Records), features her kinetic recitation with jazz accompaniment. Her poems are often homages to the jazz masters who’ve inspired her or chronicles of self-enlightenment.

“In this project I’m circling back to where I started, free verse poems written for the page,” says B, who celebrates the album’s release Nov. 2 at the Back Room in Berkeley and Nov. 16 at Bird & Beckett. “Like Benjamin Boone working with Phil Levine or Matt Wilson with Carl Sandburg, I approached this as: Here are these existing poems. What do they need to be realized?”

With so many jazz musicians eager to find new sources of inspiration and poets looking to find fresh avenues for presenting their work, the natural communion between is likely to expand in the coming years. Judging by recent collaborations, this is good news for both art forms.

The great jazz vocalist talks about his new holiday album and upcoming concert at the Herbst.

Notable guests join the hip big band as it premieres selections from a new CD.