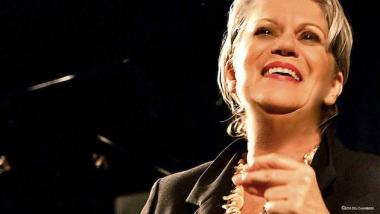 Kellye Gray was such a powerful and striking figure on stage that it’s been hard to fathom the media silence that greeted her sudden death last year. A jazz singer who brought a generous helping of Texas bravado to the stage, Gray was a creative force on the Bay Area scene for a quarter century, even though she often lived elsewhere. Just months after moving to Paris last winter she was diagnosed with breast cancer and died within two weeks on Dec. 29.

A month later, the Houston nightclub Ovations presented a tribute to Gray featuring numerous musical comrades, including veteran jazz vocalist Roseanne Vitro, a fellow Texan who was one of many colleagues who expressed their shock and grief online. Gray, she wrote on Facebook, “was like a little sister who used to come and hear me sing at the Green Room in Houston years ago. When I finally heard her sing, well she blew me away. Kellye possessed a larger-than-life talent. She was a natural scat singer. Her spirit and sound were large ... Lou Marini used to call me the Texas Tornado, but Kellye was the Hurricane!”

A highly accomplished musician, Gray forged ties with some of jazz’s most formidable improvisers, such as Brazilian pianist Jovino Santos Neto, Venezuelan keyboardist Otmaro Ruíz, and trombonist Wayne Wallace. She made many of those connection at Jazz Camp West, the summer program in La Honda that was long run by vocalist Madeline Eastman.

Gray already had a prodigious reputation when she moved to the Bay Area in the early 1990s, and Eastman and fellow vocalist Kitty Margolis made a point of taking her out to lunch “to welcome her to town,” Eastman said. “Kellye and I have done many a gig together, from the Ramp to Yoshi’s. I hired her a zillion times for Jazz Camp, where she was a bright light. Classes were always inventive and her singing electric. I always loved getting her class descriptions as they were clever, funny, and insightful ... all wrapped up in a little paragraph.”

Jazz singers aren’t always highly regarded by the musicians who accompany them, but many of Gray’s former bandmates wrote about the pleasures of working with her. Rather than seeing herself as a singer backed by a band she made herself part of the ensemble, whether she was rendering a lyric with uncommon intelligence or scatting at full throttle.

Drummer Pete Devine worked with her frequently, and wrote about playing with Gray in various venues. “From those infamous Sunday afternoons back in the ’90s at the No Name Bar in Sausalito with Mal Sharpe’s band, to shows at Yoshi’s, Pete Douglas’s Bach Dancing & Dynamite Society in Half Moon Bay, and more recently at the Fior D’italia in San Francisco, her singing and persona were always bold and exciting. It’s like she was continuously creating something different and new each time she sang. She was truly a free spirit, and that came through in her music.”

A self-described “military brat” born in Dallas who grew up mostly around air force bases in Texas, Gray loved to sing and studied guitar as a teenager. Possessing a good ear and persistent nature, she started figuring out chords to play along with jazz vocal albums in her parents’ collection. By the early 1980s she was establishing herself as a performer in Austin, but not as a singer. Part of the city’s thriving stand-up scene, Gray joined a comedy troupe that included Bill Hicks and Sam Kinison. After doing several one-woman shows, she ended up sitting in to sing with a friend, guitarist Scott Cain, who encouraged her to take singing seriously.

Her experience in comedy came through via her command of the stage, and the evocative palette of sound effects she’d developed as technical director for the comedy troupe became part of her scat vocabulary. As the leader of the Kellye Gray Band she soon outgrew the Austin scene and made the move to Houston. Her excellent 1990 debut album Standards in Gray (Justice Records) caused a minor sensation and she seemed poised to break out of the jazz scene. It never happened, but she earned a devoted audience in jazz.

Looking for more opportunities, she headed west and quickly became a mainstay on the Bay Area jazz scene. Jazz vocalist Kim Nalley, who was just starting to make a name for herself in San Francisco, remembers being blown away by Gray. “She could sing anything!” Nalley said. “I wore out that first album of hers. Kellye was such a force.”

But with little interest from record labels, Gray decided to try her luck in Los Angeles in 1999. A couple years later found her back in Austin, coming to terms with her home state on one of her best albums, The Texas Music Project’s And, They Call Us Cowboys (Grr8 Records). The album features her incisive and inspired interpretations of songs by iconic Texas tunesmiths like Roger Miller (“Dang Me”), Kris Kristofferson (“Help Me Make It Through the Night”), and Roy Orbison (“Only the Lonely”).

“I was dealing with a lot of death, and it was a heavy time for me,” Gray told me in a 2013 interview. “In my recovery I was so frustrated creatively, and I wanted to be able to tie together these two very important parts of my heritage, my jazz sensibility and Texas. As I began to do the research, I became more and more overwhelmed with the titles I remembered.”

Looking at it now, her last release, 2017’s Rendering (Grr8 Records), serves as something of a career capstone. She used the two-disc album to reissue her first recording, Standards in Gray, alongside a gorgeous new set of songs. The contrast between the bright, eager, and self-possessed young Gray and the emotionally incisive, slay-you-with-a-ballad veteran is beyond poignant. Searching YouTube for videos to post with this piece, I’m dismayed to see how few there are. I’m hoping that there’s a lot of concert footage gathering dust that someone will get around to posting soon.

I’ll leave the last words to Kellye, as related by her Texas friend, Rachel Kirkland, who in announcing her death quoted her talking about singing. “It was always about God; about the bigger picture. I am a spirit and my goal from the beginning was to uplift the masses with my voice. It wasn’t always music, but it was always through my voice, my truth ... however that voice was expressed, know what I mean? But, in the end though, what I can truly say is ‘the greatest thing you will ever learn is just to love and be loved in return.’ That’s it.”