As whirlwind love affairs go, vocalist Sheila Jordan is the best kind of paramour. The NEA Jazz Master breezed into town last week for several shows, concluding with a 7:30 p.m. set Sunday at the SFJAZZ Center’s Joe Henderson Lab, and she didn’t so much leave her heart in San Francisco as open it up to embrace everyone in the audience.

With her trademark bangs and beret, Jordan cuts an almost girlish figure on stage, emanating a perpetually pleased-to-be-here vibe. But what makes an encounter with the 90-year-old vocalist so exhilarating is her gift for infusing that ingenuous sense of joy into her music. A cutting edge figure ever since she made her recording debut in the early 1960s, Jordan exemplifies the way that bebop can still be the music of the future when rendered by a master who lives in the moment. 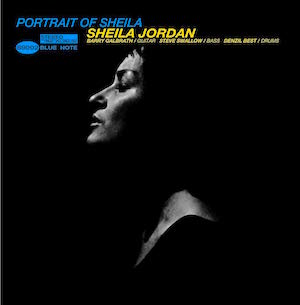 She opened Sunday’s late set singing her greetings to the audience, tossing in an extemporaneous plug for a new documentary about Blue Note Records (It Must Schwing!), the label that released her landmark 1963 debut album Portrait of Sheila. Accompanied only by bassist Cameron Brown, a consummate improviser best known for his long tenure powering the George Adams/Don Pullen Quartet, she sauntered through a high-wire series of dialogues, often turning lyrics into paeans for her duo partner, like her transmutation of “I’ve Grown Accustomed to Her Face” into “I’ve Grown Accustomed to the Bass.” If Jordan offered effusive affection for the audience she positively love-bombed Brown.

The vocal/bass duo is an extremely demanding, utterly exposed format that Jordan pioneered in the early 1960s with Steve Swallow, and revived two decades later with Harvie S. Few vocalists have followed her lead (though one of her many mentees, Kavita Shah, released a stellar duo album with bassist François Moutin last year, Interplay). Jordan and Brown have been touring the world for the past 15 years or so, and they communicate with the kind of intuition and spontaneous invention that makes jazz lovers want to grab friends uninitiated into the music’s particular joys to say, “This! This is what jazz is all about.”

Much like alto saxophonist Lee Konitz, another NEA Jazz Master thriving as a nonagenarian, Jordan tends to return to a small patch of songs, a repertoire that she revises and reimagines nightly. On Sunday she performed two signature Oscar Brown Jr. songs, “Hum Drum Blues” and the hilarious “Dat Dere” (music by Bobby Timmons), that appeared on her debut album. On the standards “If I Had You” and “Autumn in New York” her phrasing stretched and compressed time so that each line arrived with a half-beat surprise.

She rendered “Blue Skies” like a sharply etched line drawing, omitting any extraneous details, and then turned the piece into a medley. Still singing, she mentioned Miles Davis and Jon Hendricks’s vocalese setting for “All Blues,” but decided instead to transition into Hendricks’s version of the trumpeter’s solo on another track from Kind of Blue, “Freddie Freeloader.”

Jordan doesn’t scat as much as she used to, but when she does she taps into the soul of the bebop idiom, painting every phrase with a tinge of the blues. Summoning various musicians with a musical phrase or introductory remarks, she makes you forget there are only two players on stage. Over the course of the evening she summoned Don Cherry, Miles Davis, Billie Holiday, and, of course, Charlie Parker, Bird, her abiding muse.

She concluded the concert as is her want, offering a capsule account of her life, from her birth to an unwed 17-year-old mom in Detroit, growing up raised by her grandparents in Pennsylvania coal country, and her return, at 14, to the Motor City, where she came under Parker’s bebop spell and started frequenting the African-American jazz clubs he was playing. She’s been chasing the Bird ever since, and on Sunday she once again repaid her debt in her own playful, insouciantly swinging style.