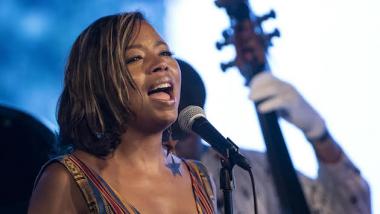 Tiffany Austin’s rapid rise as this decade’s most exciting new singer on the Bay Area jazz scene isn’t driven just by the voluptuous quality of her voice. She made a powerful first impression on the strength of her sound and compelling sense of swing with a project focusing on the songs of Hoagy Carmichael, 2015’s Nothing But Soul. But her recently released follow up Unbroken (both on her Con Alma Music label) is the work of an artist to be reckoned with, an ambitious and increasingly confident songwriter unbounded by the American Songbook.

At the second of two sold-out shows Saturday night in the SFJAZZ Center’s Joe Henderson Lab, Austin delivered a set dominated by original songs suffused with many of the rhythms, cadences, and song forms that embody African-American culture’s lifeblood contribution to American music. Cut from the durable and vividly expressive cloth of the blues, gospel, and Duke Ellington, her originals feel intimately familiar even as she tells stories that often lurk in the background.

She opened the set with her celebration of the pioneering Louisiana Creole accordionist Amédé Ardoin (1898–1942), “Blues Creole,” briefly mentioning his foundational role in zydeco and the tragic end of his career, possibly precipitated by a racist assault. While her lyrics sketch the sad tale, the rollicking piece was far more a celebration of his music than a lament, with her high-velocity scat solo bringing the tune to a delirious climax. Bay Area bass master Jeff Chambers brought the proceedings back to earth, referencing the classic bass line from Cedar Walton’s “Bolivia.”

She followed with another original, “Greenwood,” a thematic diptych with “Blues Creole.” Rather than describing one man’s fate, the song connects the riots of Watts and Ferguson to the 1921 pogrom that wiped out Tulsa, Oklahoma’s prosperous “Negro Wall Street” neighborhood. Even more than on “Blues Creole,” Austin sets a searing tale to an irresistibly swinging, defiantly optimistic beat, punctuated with an exuberantly pungent solo by New Orleans trumpeter Ashlin Parker, full of smears, cries, and moans.

Austin’s originals didn’t carry the entire set. She deftly navigated the rapidly shifting harmonies on an up-tempo arrangement of Dizzy Gillespie’s standard “Con Alma,” but it was her holy-roller rendition of Charles Mingus’s directive “Better Git It in Your Soul” that served as the set’s signature, with a gospel groove and Carl Allen cymbal work that brought to mind a tambourine. Looking down to the front row, she gave a shout out to 85-year-old Oakland saxophone legend John Handy, noting that he played on Mingus’s original 1959 recording of the tune (the opening track on the seminal album Mingus Ah Um).

The service wasn’t over yet, as Austin offered her own sermon with her original “Music’s Going to Meet Me There.” Woven together with Ellington references, starting with Chambers’s  opening quote from “Do Nothing Till You Hear From Me,” the piece added joyous fuel to the party.

While it probably didn’t make sense financially, Austin’s seven-piece band featured many of the players from the album, including trombonist Mitch Butler, who wrote all of the arrangements, and reemergent tenor saxophonist Teodross Avery, who is concentrating on gigs again after completing a Ph.D. from the University of Southern California’s Thornton School of Music. Austin gave the band plenty of space to play, often sitting back to appreciate their contributions.

Playing with force and authority, the key out-of-towner was the brilliant drummer Carl Allen, a New York institution who ran Juilliard’s jazz studies program from 2008–2013. No player took better advantage of his time in the spotlight than Alameda pianist Adam Shulman, a player who has made himself invaluable in recent years (he performed with regular employer Paula West the following day at San Jose Jazz’s Summer Fest, and accompanies the great ballad singer Ed Reed at Berkeley’s Back Room on Sunday afternoon).

Austin closed the concert with a different kind of diptych — two songs celebrating life and death (and life everlasting). Her celebration of Eros, “King of Pleasure,” opens with the line “There’s a fire in my body,” and the song lives up to its sensuous promise. She closed with the folk gospel song “Ain’t No Grave (Can Hold My Body Down).” In a set marked by elegant, unbowed spirit, Austin left the stage with an eye on the bigger picture, offering a pointed reminder about the forces coursing through her music.