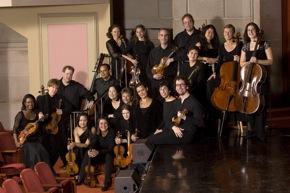 The New Century Chamber Orchestra may be a familiar orchestra in the Bay Area, but lately the rest of the country has had a chance to discover its special vitality on its first tour in 10 years. And while winter, especially this winter, may not be the ideal time to schedule a tour that included stops in the frozen Midwest, it turns out that this tour has been, in the words of principal bassist Tony Manzo, “charmed.”

The Naumburg Competition: Formula One for Finding Talent

It starts, of course, with the music. The orchestra has been garnering praise wherever it has played. According to principal second violinist Candace Guirao, “As far as performing, the music is really fantastic. We don’t get to perform so many consecutive days, usually. Being on the road, we’re sounding better and better. Our level has become great. It’s very satisfying.” For Manzo, all the concerts have been rewarding, yet those in Ann Arbor (Michigan) and Chicago really stick out.

While the NCCO has always been noted for its highly energetic performances, even the musicians are seeing an increase in the performance intensity, especially considering its touring schedule. Says violinist Deborah Tien Price, “There’s a different energy, and we’re having a really good time. It’s surprising how energetic I feel. I’m going all day long, and enjoying performing night after night. I have a chance to focus.” She does add that “The sound checks are interesting. In each place, it’s a new hall, a new set of acoustical challenges. It’s a bit harrowing in the sound checks, but great in concert.”

This increased intensity isn’t lost on the audiences, most of whom are hearing the orchestra for the first time. Says Price, “It’s gratifying to have such an excited response. There’s a different energy, and we’re having a really good time.” Guirao agrees. “We’ve had more than enthusiastic audiences. It’s been really exciting to play to some new audiences, then to see the new audiences’ reaction.” Manzo adds, “I do a lot of touring with other groups. I’ve never seen responses like that in Cleveland. Usually they’re very staid there. They were jumping out of their seats and calling out. It’s a very special energy.”

Away from the concerts, things are going equally well. What’s been unexpected is that there have been, in Manzo’s words, “no major ‘oopsies.’” Simply traveling with a group is always a challenge, but so far everything has gone well, starting from the first flight to Cleveland. It turns out the members were on one of only three flights that made it to the city that day. Since then, they’ve been dodging the weather, including leaving Ann Arbor just two hours before one of this winter’s major storms paralyzed the city.

They’ve also been lucky with instruments. They were all able to do early boarding when leaving on the tour, so there was room for the instruments in the overheads. For Tony, it’s been a chance to try out the new removable neck on his bass for a multistep tour, and he extremely happy with how well that has worked. Traveling together has also given the musicians a chance to spend more time with each other away from the intensity of their rehearsals, a luxury they don’t usually have in their normal schedules. The orchestra members all talk about what an enjoyable experience this has been for them as a group, even when they’re not performing, and feel it’s helped how they’ve played and how that affects the audience. Guirao points out that it’s a chance for them to have deeper conversations, and that the bus rides have been “quite the scene. We had a great bus driver who liked to brake really hard; there were always people up and mingling, and someone would go flying.”

It’s not all deep conversations and music, though. The group has found time to explore the cities they’ve visited, and there was the paper airplane festival they launched into the atrium of their hotel in Cleveland. As Price puts it, “There’s something about being together that is nice.” For her, a bonus is that she and husband Evan Price, a fellow violinist, have their 18-month-old daughter, Eleri, with them on tour. She’s having a fine time, as well, and has become the tour mascot.

The operative word all along the road has been great: great music, great audiences, great travel luck (with both transportation and accommodations), and great fun. But what was one of the tour’s outstanding moments?

They converted a snowboarder. As Manzo says, “That was hilarious, but it sums up what’s special about the group.” Scott, the unsuspecting snowboarder, was seated among the group on the flight to Cleveland. Guirao, seated in the same row, says they egged him on a bit as a bit of a joke, and invited him to the concert. Sure enough, he attended, to everyone’s surprise, and came backstage afterward. He was an immediate fan of the orchestra, describing the music as phenomenal, and is making plans to attend future concerts in the Bay Area. Since then, says Guirao, they’ve been asking the most unlikely people to come to the concerts.

To learn more about the trip and see photos of some of the venues, Manzo’s deconstructed bass, Eleri’s first encounter with snow, and snowboarder Scott, check out the Tour Blog. To hear just how good the New Century Chamber Orchestra sounds after the tour, consider attending its final tour concert at UC Davis on Feb. 12, or make plans to attend its next concert series, “Mastery of Schubert,” March 24-27.