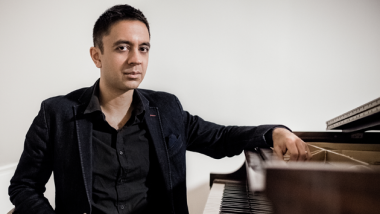 ​Vijay Iyer — the jazz pianist, musicology professor, and MacArthur fellow, and largely unknown beyond a devoted jazz following — has been on the West Coast this month, directing the Ojai Music Festival in Southern California. On June 16-18, he was in the Bay Area for the “Berkeley edition,” presented by Cal Performances.

We spoke to him the other day on the phone. He’s the 45-year-old son of Indian Tamil immigrants, with an easy way about him, and a special affinity for contradictions, metaphors, and the abstract in general. He also chooses his words carefully — not unlike a musician alternating between sound and silence — and so it’s best in conversation to let silences run, to let his thoughts find form as well as substance.

His deliberate way of speaking may also echo his persona as a one-time scientist. Twenty years ago, he took a doctorate from UC Berkeley in physics, the study of which left him with that conviction, common among physicists, that the solution to a problem is incomplete without a proper aesthetic. And thus, Iyer’s sensitivity to how things are expressed, whether on a keyboard or in a sentence.

In the realm of music, the proper aesthetic, however defined or applied, is one basis of Iyer’s sense of the “transformative experience,” for both musician and listener.  Transformative is defined here as the “shared experience of going through something together and the bond created by coming out the other side.”

Which is something Iyer has long been thinking about but especially just now, in part because this fall at Harvard his musicology course will focus on “critical listening” and, in passing, on the nature of harmony and the meaning of a transformative experience.

In metaphorical terms, that’s to suggest “simultaneous presence and then the experience of moving together.”

“Those are important metaphors for community and for collective action. I’m not trying to be evasive or mystical by putting it in those terms, but these are very meaningful to me, not only as a pianist but also as an artist and the way they frame some of the work I do.”

He offered this example of how he uses this notion in his approach to students — “who are often fed this idea that artists need to be ‘entrepreneurs.’ That’s the new, neoliberal 21st Century model. I try to offer them a very different framework, which is that artists need to be community organizers. And actually, that has much more in common with the music I know — as opposed to treating the arts as some baby version of the business world. That’s not what we are, that’s not what we do, that’s not why I do it….

“The choice is to take action in some kind of social context, and in that sense, these perspectives on harmony may have some significance. The conventional wisdom about harmony as a metaphor is that it suggests the absence of tension. But, as we know about music, harmony is about tension and release. So it’s about the need for change and the need for resolution.”

A Transformative Shock to the System

For Iyer, the artist’s role is to serve as a “conduit for the energies around us and a point of focus for the people around us.”  But the role is also to create an opportunity for audiences to experience some kind of “shock to the system.” A revelation of some kind, often unexpected, perhaps even unwanted.

Iyer points to half a dozen moments in his life where, as a listener, he was pushed to the “brink of my understanding of what I thought music could be or what it could do, to that point where you’re saying, ‘that’s not music, but then what is it? It can’t be happening; that’s impossible’. The point at which it’s as though my own understanding of what music is has been transformed.”

One of those moments came in 1992 at a memorial concert for composer and sound recordist Gerald Oshita at the Center for New Music and Audio Technologies (CNMAT), a research center at UC Berkeley. The concert featured a solo saxophone performance by Roscoe Mitchell, the great instrumentalist, composer, educator, and activist who co-founded the Art Ensemble of Chicago and the Association for the Advancement of Creative Musicians (AACM). Oshita and Mitchell had been close friends.

Iyer remembers a 12-minute performance in which Mitchell hardly made any sound at all. “It was like this profound meditation; and a kind of drama that emerged from the impossibility of making any sound. It wasn’t like you could transcribe this or even score it, it was just this moment where, especially for me at age 21 or 22, I was riveted and not just by watching the process unfold but by what it did sonically in that small room, which seats 80 to 100 people. It just changed my awareness of space and time and sound, and body. It was one of those moments where I felt like ‘that’s not music, but why can’t I stop listening to it’? And then I had to reassess my own understanding. There was just something so pure about it, it felt like the center of the universe for a moment.

An Aside: Roscoe Mitchell’s Sound and Silence

Earlier this week we reached Roscoe Mitchell. Yes, he remembered that memorial concert. “I’ve always been a big supporter of sound and silence,” he said, talking from his home in the East Bay. “My take on silence is that silence is already perfect, so when you interrupt silence you need to interrupt it on its level.”

As for whether Mitchell felt as transformed playing the music that day as Iyer was in listening to it, he didn’t remember the concert in enough detail to say. But he added, “some nights you walk out there and there’s nothing you can do wrong. “You’re great.” And then there are other nights when you’re out there and you’re working all the time. My experience with music is that you work real hard and then all of a sudden music smiles at you and that encourages you to keep working.”

At the CNMAT concert the music smiled.

By the same token, a transformative moment for Mitchell, both as musician and listener, was one night in the 1960s at the Plugged Nickel club in Chicago. The band included John Coltrane, pianist Alice Coltrane, bassist Jimmy Garrison, drummers Rasheed Ali and Jack DeJohnette, and tenor saxophonist Pharaoh Sanders.

Mitchell happened to be in the house. DeJohnette noticed him and suggested to Coltrane that Mitchell be invited to step in.  He agreed and Mitchell went out to his car to get his saxophone. What unfolded was one of the most transformative moments in Mitchell’s life.

“Finally, they played “Naima” and somehow music smiled on me. At the end of this, I got ready to pack up and Coltrane said, “Oh no, come back for the next set. I like what you’re doing.”

Mitchell was transformed, literally and figuratively. “That whole night was magical.”

Incidentally, Mitchell, now 76, has been in the news recently, after Mills College announced that as part of budgetary cuts, Mitchell and 10 other faculty members are being dismissed. On the day we spoke to him, Mitchell, the sole, full-time, African-American faculty member in the music department, was going off to a meeting of those dismissed to see whether the situation might be changed.

“There’s been an outpouring of emails and letters from people all over the world,” he said. “I’m overwhelmed — and very grateful.”

Mitchell didn’t sound entirely disheartened. He had another problem. The great trumpeter Wadada Leo Smith had just pulled out of the Ojai at Berkeley concert, scheduled for 8 p.m. on Thursday (June 15). Iyer called to see if Mitchell could take his place. But Mitchell was due for a 10 p.m. concert in Montreal the same night.

“I’m scrambling to see if I can change things,” he told us, but then it turned out he couldn’t. He had to go to Montreal; and still the music was smiling.

The Year of the Woman at the Ojai Festival

The composer’s Time, Place, Action got its West Coast premiere, but stronger pieces by Debussy and Haydn received less attention from the quartet.