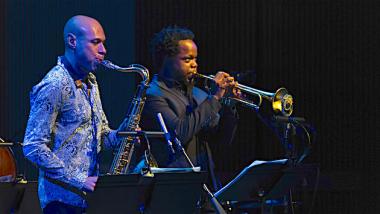 Add another debt of gratitude to the lengthy list accrued by Wayne Shorter, the revered saxophonist widely if not universally hailed as jazz’s most influential composer after Thelonious Monk. When a sudden bout of illness prevented the 85-year-old from playing his annual winter residency at SFJAZZ last week the organization pulled together a four-night celebration that couldn’t have featured a more impressive roster if it had been planned six months in advance. Everyone wants to bask in Shorter’s aura and explore his music (his three-disc album and comic book Emanon just topped this year's NPR Jazz Critics Poll). 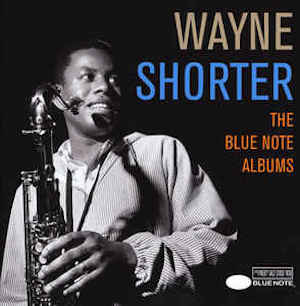 I made it out to Sunday’s show with tenor saxophonist Joshua Redman and trumpeter Ambrose Akinmusire, who represent two prodigious generations of Berkeley High jazz alumni. If they were more reverent toward Shorter’s music than the composer himself, who’s spent the past two decades with his quartet atomizing his canonical pieces, Redman and Akinmusire brought the requisite spirit of adventure. They drew almost the entire set from Shorter’s extraordinarily productive six-year run from 1964–69 when he was writing for the Miles Davis Quintet and his own series of classic Blue Note albums.

The band opened with a sinuous excursion through “Water Babies,” a piece introduced on Shorter’s transitional 1969 album Super Nova, though the theme only surfaced when Redman and Ambrose suddenly arrived together for a unison statement after about 10 minutes of wandering down different paths. Throughout the concert, the band conjured the sense of mystery and numinous possibility that makes Shorter’s music so infinitely variable. Akinmusire opened “Witch Hunt” with such a warm and compressed tone I thought he’d slipped in a mute. Rather than playing hide and seek with the melody, one of the strongest tunes on Shorter’s magisterial 1966 album Speak No Evil, the quintet darted and feinted through the incident-filled piece.

Two conspicuous dynamics ran through the evening. As a unit, Perez, Blade, and Patitucci are so strong and deeply connected that the energy seemed to surge whenever the horns dropped out, much like a bull bucks more wildly after throwing a rider. The freedom that Shorter has cultivated by encouraging each player to pursue an independent line when they see fit, can lead to moments of chaos and disconnection. But Sunday night the center cohered, and the results were exhilarating.

Just as fascinating was the contrast between Redman, an improviser who embodies an unusual combination of the extroverted and cerebral, and Akinmusire, a player who drills inwards, revealing himself in brief glimpses that defuse tension. As the set moved in an almost uninterrupted flow from Shorter’s signature standards “Masqualero”, “Fall” and “Footprints,” Redman would venture outwards, building to ecstatic heights while Akinmusire’s solos felt distilled to a gleaming essence. The contrast kept the music off balance in the best possible way.

For an encore, Redman took command with the only latter-day piece of the evening, “Joy Ryder,” the title track to Shorter’s underappreciated 1988 Columbia album. It was an abrupt change of mood that offered a reminder that as far as the music had traveled during the concert, the band had only explored one constellation in Shorter’s vast and still-expanding universe.