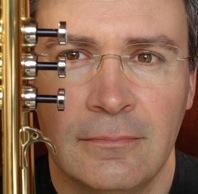 Gabriele Cassone came to all his instruments — the modern trumpet, the natural trumpet, and the keyed trumpet — almost by accident. But what a series of happy accidents they proved to be, uniting an enthusiastic and talented performer with gems from the 18th- and early-19th-century repertoire that are rarely heard on the instruments for which they were written. This weekend, Philharmonia Baroque Orchestra will feature Cassone in a performance of Johann Nepomuk Hummel’s Concerto in E for keyed trumpet, and Bay Area audiences can have a chance to hear this seldom-used instrument in person.

Cassone started playing the trumpet at 10, because his father gave him two options: clarinet or trumpet. Like many rambunctious young men, he made a decision based on the degree of “cool factor.” As he reported in a chatty recent interview, “I chose the trumpet because it looked good. It was gold. And it was loud.”

An Interview with Nicholas McGegan

From these modest beginnings grew a rapidly budding career. Just seven years later, Cassone won his first post, with the Pomeriggi Musicali chamber orchestra in Milan, and occasional performances at La Scala. His technique on modern trumpet won praise from Luciano Berio, for whom Cassone has premiered several new compositions. New music continues to occupy an important corner in his professional activities.

But for early music, Cassone has long been drawn to older forms of the trumpet. In the 1980s, Cassone says, “I heard wonderful sounds from Ton Koopman’s and [John Eliot] Gardiner’s orchestras — the sounds of the natural trumpet. I decided that I just had to learn to play that instrument. I bought two, and had a terrible time playing them.” An organist friend encouraged him to stick with the new instrument, and the sudden opportunity to record Giovanni Battista Fontana sonatas with this organist spurred Cassone into action. “It took me a few months to realize that the natural trumpet is a totally different instrument [than the modern trumpet],” he recalls. Hours of scales and arpeggios later, he had mastered the instrument well enough to lay down that first Fontana record, and a career as a historically informed performer was born.

Cassone’s thirst for new experiences with old sounds wasn’t quite quenched, though. He had heard recordings of Haydn’s trumpet concerto on both modern and antique instruments, but he never had the opportunity to hear the keyed trumpet live, the instrument for which Haydn’s concerto was written. To have this opportunity, Cassone did a very impulsive thing: He scheduled a recording of Haydn’s concerto along with Hummel’s concerto before he had ever laid hands on a keyed trumpet. He ordered a new instrument from a Milanese builder, and began a frantic program of self-education. “I practiced scales for four to five hours a day,” Cassone recalls, “until I had taught myself to play another instrument.” Soon, he realized that he had chosen another instrument that bore little resemblance to his first trumpet.

The keyed trumpet is very long (some 6 feet if it were completely uncoiled), and it possesses hinged keys much like those found on historic wind instruments such as the oboe or Baroque flute. The instrument for which Haydn wrote his concerto in 1796 had just three keys. By the time that Hummel wrote his concerto, just after the turn of the 19th century, the instrument had acquired three more, for a total of six.

These little buttons allowed the keyed trumpet to become a fully chromatic instrument. The natural trumpet had been able to play only diatonic (scalar) tones, except in its highest registers, thereby limiting the expressive potentials for the instrument. With the advent of keys, the trumpet became capable of more distant modulations and chromatic inflections in its lower registers — just the sorts of capabilities that would have appealed to Haydn and Hummel, with their tuneful styles containing themes that develop and repeat in various key areas.

The instrument got off to a rocky start. Anton Weidinger, the first major performer on the instrument and almost surely involved in some way with its early development, was not ready to perform Haydn’s concerto on its completion in 1796. It took another five years for Weidinger to play the work, and Cassone assumes that the trumpeter must have been working with a builder to tweak and improve the instrument. One 19th-century critic said that it sounded like “a demented oboe,” and few other composers gave the instrument any prominent works. Hummel’s concerto, which he wrote in 1803, was an important addition to the repertoire.

Cassone insists that the keyed trumpet boasts some unique expressive tools. Due to the keying system, variations in tonal quality occur not only from register to register, but also from note to note, which can be exploited for artistic purposes. The keys also supply the possibility of an interesting tremolo effect, complete with its own ornament symbol in the Hummel concerto. One of the instrument’s most bewitching effects is its ability to play very quietly — much more quietly, Cassone assures us, than a modern trumpet. And, finally, there is this instrument’s lowest note, a D that modern instruments aren’t able to play. Listeners who might have heard performances or recordings of this concerto might not have noticed that this low D had to be somehow edited out of the performance, but they will surely now notice its presence in Philharmonia’s upcoming concerts.