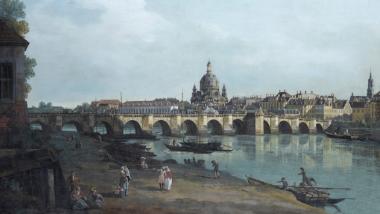 Aspiring and emerging young professional vocalists and instrumentalists have flocked to San Francisco from all over the world to quench their thirst for knowledge about period-performance practice and prepare to become the next generation of early-music specialists.

They are taking part in the ninth annual Festival & Academy of the American Bach Soloists (ABS), which runs through Aug. 12 at the San Francisco Conservatory of Music and at St. Mark’s Lutheran Church.

This year’s event focuses on “The Glorious Court of Dresden,” which in the 18th century was famed for its excellence in music-making. The presence of a large number of distinguished musicians and composers made Dresden one of Europe’s most important musical capitals.

For Academy participants, colloquia, master classes, and lectures on the subject provide a week-long nurturing and educational environment, while the Festival part offers a series of Dresden-themed concerts, as well as ABS’s annual presentation of Bach’s Mass in B Minor (August 12), and a large-scale opera or oratorio (this year Handel’s Semele — August 9 and 10), performed by Academy students conducted by ABS’s Artistic and Music Director Jeffrey Thomas.

The fact that so many Academy alumni eventually join the ranks of the American Bach Soloists proves the success of the ABS Festival & Academy as incubator for a new generation in early music, and it literally keeps the ensemble young.

But regardless of its role as educational institute for the historically informed performance practice and breeding ground for young early music specialists, American Bach Soloists demonstrated in Saturday’s concert that — more than anything else — it is simply a phenomenal Baroque choir and orchestra.

That was especially apparent in the evening’s crowning performance of Bach’s secular Cantata BWV 215 from 1734, which showers praise and flattery on August III, Elector of Saxony, and King of Poland.

The opening and closing choruses of the congratulatory cantata, with a full complement of woodwinds, trumpets, and timpani in the orchestra, were little slices of heaven, and found the ABS choir excelling in transparency and sprightliness.

In between, tenor Matthew Hill, bass-baritone William Sharp, and soprano Clara Rottsolk did great work in their respective recitatives and arias. Particularly beautiful was the interaction between Rottsolk and the two flutists in the soprano aria “Durch die von Eifer entflammeten Waffen” (By the use of weapons ignited with fury); and the tenor recitative “Wie kommen wir, großmächtigster August” (How could we, most powerful August) by Matthew Hill, an Academy alumnus who made his ABS debut with this concert.

As recipient of the 2018 Jeffrey Thomas Award, violinist Jude Ziliak was concert master for the evening, and soloist in Vivaldi’s Violin Concerto in D Major, RV 205. A bit uneven in his expression, he nonetheless beautifully contrasted the fragility of the Largo second movement with the more robust and technically challenging Allegro finale and he brought the concerto through an extensive cadenza to a very convincing close.

From an airy Mozart piano piece to a dramatic Schoenberg sextet, the final program of 2018 was a study in contrasts.