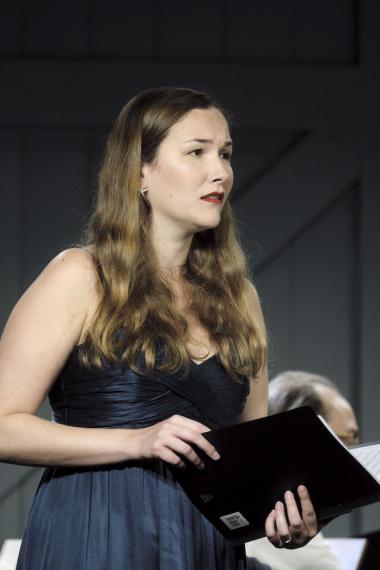 The 73rd Ojai Music Festival began June 6 — the 75th anniversary of the D-Day invasion — with Barbara Hannigan conducting a complete performance of The Rake’s Progress by Igor Stravinsky, who had fled from Europe on the eve of World War II and found his way to Los Angeles. It ended Sunday — the night of the Tony Awards — with Hannigan again at center stage as soprano and conductor generating Broadway star power in her Crazy Girl Crazy salute to George Gershwin. By the time it all ended, and Hannigan thrust her arm to the sky in a gesture of pure triumph, all you could say was, “Wow!”

Those four days and evenings of concerts also marked Thomas Morris’s 17th and final stint as festival director. It’s been a remarkable tenure that greatly expanded (for better and worse) the festival’s concert schedule while presenting a succession of innovative music directors that included, among others, the late Oliver Knussen, Dawn Upshaw, Mark Morris, David Robinson, Eighth Blackbird, and last season’s Patricia Kopatchinskaja.

Presenting Hannigan and Kopatchinskaja back-to-back created a fascinating yin/ yang of musical and emotional personalities. Both are remarkably talented, powerhouses of energy, imagination, and musical mastery. And they both enjoy performing barefoot. Kopatchinskaja’s festival, however, was like a gauntlet of take-no-prisoners concerts. Hannigan’s was distinctly kinder and gentler, though hardly lacking in emotional punch.

Hannigan quite consciously works to create an ebb-and-flow with her audience and musicians that is totally infectious. She’s also not afraid to be silly. She even included a “now for something completely different” moment, performing William Walton’s modern-music satire Façade, with a cast that included Tom Morris and long-time festival commentator, Ara Guzelimian, that was Monty Python worthy.

To support the orchestral needs of her programming, Hannigan brought the European collective, LUDWIG. For the exceedingly diverse vocal programs, she showcased emerging talent from her mentoring organization, Equilibrium Young Artists (EQ).

When the audience made its way into the outdoor Libbey Bowl on opening night, the first thing they saw was an enormous, black packing crate that dominated the stage with the words THE RAKE PROJECT, STRAV 1951 stenciled on its side. Hannigan came on stage dispensing theatrical fog, then took her place at the podium. At that moment, the sides of the box collapsed revealing poor, hapless Tom Rakewell, the central character of the opera, alone in his Bedlam cell.

The Rake’s Progress, which had its premiere in Venice, in 1951, is inspired by a series of paintings by William Hogarth that tell a moral tale of dissolute degeneration. It is Stravinsky’s only full-length opera and certainly one of the greatest of his neoclassical creations.

Throughout the festival, Hannigan appeared in a marathon’s worth of different vocal and conducting assignments. Her multiple roles for Friday night’s two-part concert were particularly impressive. After a series of solo piano pieces by Debussy, Ravel, and Messiaen (performed by Stephen Gosling), Hannigan joined the JACK Quartet (Christopher Otto and Austin Wulliman, violins; John Pickford Richards, viola; and Jay Campbell, cello) for a performance of Arnold Schoenberg’s String Quartet No. 2.  Entering for the final two movements, Hannigan intoned the text by Stefan George, fluctuating between tonality and dissonance capturing the poems atmosphere of overbearing sadness and ultimate transfiguration.

The second half of the program provided one of those quintessential experiences known to longtime attendees as “Ojai Moments.” The night was perfectly still, a partial moon above, birds atwitter, with deeply hued lighting coloring the aged trees that line the bowl. Cast in a purple glow, a solo flute emerged as Ingrid Geerling performed Debussy’s Syrinx. It was a magical effect. Then, as the final notes faded, Hannigan began a sonorously textured performance of Schoenberg’s arrangement for string orchestra of Verklärte Nacht (Transfigured night).

The concert might have easily ended there, but Hannigan took Schoenberg’s portrait of anguish and transformation and carried it over to a performance of Claude Vivier’s The Lonely Child with Patoulidou as the soprano soloist. Vivier (who led a life of almost Dickensian despair, was openly gay, and was tragically murdered at 44) described the work as “A long song of solitude… without chords, harmony, or counterpoint.” The orchestration emerged organically, a series of evolving textures with Patoulidou’s vocal line sailing above, ascending toward the stars.

Saturday’s mid-day concert was meant as a remembrance for Oliver Knussen, who served as Ojai Music director in 2005. But for a man who wrote complex chamber music as well orchestral works and opera, this homage was decidedly underwhelming. It featured sparse solo works for flute and bassoon and a piano duo. The only piece that captured Knussen’s unique blend of clockwork precision and childish whimsy was the performance of his Cantata for string trio and oboe, featuring Aisling Casey.

He Had it Coming

There’s a great number in Chicago where a chorus of female murderers describe the motivations for their bloody deeds, “He Had It Comin’.” Their deeds, however, cannot compare with the tabloid realism and poetic despair expressed in Mark-Anthony Turnage’s Twice Through the Heart (1997). Literally ripped from the headlines, this operatic piece is based on the true story of a battered wife who, in a desperate act of self-preservation, stabbed her abusive husband with a kitchen knife. The libretto (for mezzo-soprano) is by the Scottish poet Jackie Kay and based directly on her 1992 documentary of the trial.

“I wanted to contrast the heightened drama of such domestic violence with plain, un-poetic speech,” wrote Turnage. “I was captivated with the idea that both the home and the prison were forms of incarceration for the battered wife.”

Australian mezzo Kate Howden (a name to absolutely take note of) gave a spine-chilling, heart-wrenching performance as a woman who is so totally lost, emotionally destroyed and still wrought with guilt. Alone in her cell, the emotional frenzy she has undergone is amplified and explored through the power of Turnage’s post-Benjamin Britten (think of Peter Grimes) style of orchestration. The conductor was Edo Frenkel.

If there were ever a piece to test the vocal range, technique, and stamina of a soprano, it’s John Zorn’s 2012 song cycle, Jumaletteret based on a legend from the Finnish Kalevala. Accompanied by pianist Stephen Gosling, Hannigan took on this nine-chapter tour-de-force that calls for every vocal styling imaginable and some that aren’t: rapid trills, multi-octave leaps, hand-flapping flutters interspersed with romantic, flowing melodies. This definitely was one of the festival’s “wow” moments.

One of the cleverest aspects of Hannigan and Morris’s programming was that it allowed some much-needed breathing time for the audience and musicians alike. It also included concerts designed as refreshing respites from dark emotional themes, thorny dissonance, and total concentration. A perfect example was the beginning of Saturday’s evening concert, which featured a program of folksongs from around the world arranged by Edo Frenkel and Fleur Barron and performed by the members of EQ.

It was good-natured and warm-hearted, ending with a hand-clapping, Cuban-beat rendition of “Guantanamera.” The performance that followed, however, possessed a wholly different sensibility — Gérard Grisey’s Quatre chants pour franchir la seuil (Four Songs for Crossing the Threshold).

Composed in 1998 shortly before the composer’s early death, these songs about death are nothing like valedictory. In fact, in some ways they hark back to the beginning of Grisey’s engagement with music as a composer, when he sat by his grandmother’s bedside as she lay dying, trying to notate her songs and realizing, after she had died, “that only the magic of sound will ever be able to evoke the lost voice.”

As you would expect from a composer who began by trying to hear more closely the qualities of individual sounds (creating a style that has been dubbed “spectralism” for its investigation of the full spectrum of sound), Quatre chants is remarkable in its sound, and unlike anything else except other works by Grisey. The fourth song, for example, opens with a blitz of percussion music but it evolves into a gentle, lyrical berceuse, a post-apocalyptic duet for flute and soprano.  In some ways, its odd sense of harmony is elusive, like musical vapor.

As sung by Hannigan (taking on yet another vocal identity) the four songs crackled with energy, from the trumpet-soprano unisons in “The Death of the Angel,” through the calming finale, “The Death of Humanity.”

The intentionally zany performance of Walton’s Façade, with its clever, post-Gilbert and Sullivan style patter songs and lyrics by Edith Sitwell was a Sunday morning treat. By then the sun was high in the sky and Ojai was getting hotter and hotter, which was a real challenge for the following performance of Terry Riley’s In C.

Even under ideal conditions Ojai tests the endurance of the audiences and musicians. By the time we reached Sunday’s exceedingly hot afternoon performance of Stravinsky’s complete ballet Pulcinella, the string intonation, woodwind precision, and brass fanfares had all begun to fray.

Remarkably, spurred on by Hannigan’s endless pool of energy, the orchestra gathered its forces and produced a resounding rendition of Haydn’s Symphony No. 49, “La Passione.”

Then, with the finish line in sight, Hannigan conducted and sang from the podium her Alban Berg-inspired interpretation of George Gershwin songs, Crazy Girl Crazy (arranged by Hannigan and Bill Elliott). With the warmth of a Broadway star she crooned her arrangement of “Embraceable You.” She ended on a high note, with her arm thrust to sky — she’s got rhythm, among her many other gifts.

The Canadian soprano/conductor talks about her approach to directing this year’s festival and about balancing her dual roles.