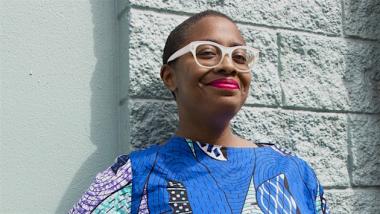 Cecile McLorin Salvant, 28, is often described as a once-in-a-generation vocalist, but the truth is she’s a far rarer phenomenon. The only comparable singer in jazz today is Dianne Reeves, who has lost none of her power at 61. They both possess luxuriant voices that can bring to mind Sarah Vaughan, particularly when dipping into their mahogany-rich chest tones, but Salvant has taken a very different path.

Arriving in Berkeley on Wednesday, fresh off winning her second Grammy Award for best jazz vocal album for 2017’s Dreams and Daggers (Mack Avenue), Salvant delivered a tour-de-force that was all the more impressive because she spent much of the night withholding her extraordinary instrument.

Where Reeves presides over a room with an approachably regal air, Salvant is a trickster, an aural shapeshifter who delivers a punch line as well as any singer in jazz. She opened the Cal Performances concert at Zellerbach Hall with the brutal Dave Frishberg/Bob Dorough number “I’m Hip,” a hilarious evisceration of a certain species of poseur, circa 1959. Like a significant percentage of Salvant’s repertoire, it’s a song indelibly linked to Blossom Dearie, whose disarmingly beguiling voice and brisk, midtempo interpretation softened the song’s sting. Salvant’s arrangement slowed it way down so she could land each scalpel thrust with maximum damage.

Her partnership with the consummate pianist Aaron Diehl has grown deeper, and at this show at least his arrangements often stayed in the background. With bassist Paul Sikivie and the superlative drummer Joe Farnsworth, a recent member of the trio, Salvant seemed assured she could make any musical move.

Restraint marked her version of the Nancy Wilson vehicle “Guess Who I Saw Today?” But when Salvant delivered the titular query at the climax, she finally loosened the reins, letting a piercing note of anguish peak through before returning to quiet desperation.  She gave “Sophisticated Lady” the attention of an art song, making Ellington’s wending harmonic maze sound like a relaxed stroll.

In another page from the Dearie book, Salvant landed every gut punch on Rodgers and Hart’s "Ev'rything I've Got,” a song that serves as the perfect antidote to “My Funny Valentine.” It wasn’t until a duet with Diehl on Norma Winstone’s sumptuous adaption of Jimmy Rowles’ “The Peacocks” that Salvant finally gave a taste of her full power. Retitled “A Timeless Place,” it’s a rarely sung gem that indeed seems to make time stand still. With its velvet-plush texture, Salvant’s voice negated the line “beauty is only an illusion” as she sang it.

She closed the concert with “Wild Women Don’t Get the Blues,” a timely replacement for the salacious blues she often revives. While the concert clocked in at a relatively brief 70 minutes, Salvant returned for a two-song encore. In yet another petal-nod to the great Blossom Dearie, she and Diehl wrung every laugh out of “The Ballad of the Shape of Things,” a geometric tale of revenge by “Fiddler on the Roof” lyricist Sheldon Harnick.

Joined by the full band, she closed the evening with a burst of pure romance, offering an unadorned take on Lennon and McCartney’s “And I Love Her.” More than satisfying, the concert was buzz-inducing, yet Salvant didn’t seem to break a sweat. With, goddess willing, decades to grow, she’ll be revealing the full breadth and depth of her gift for generations to come.

The “Harpist from the Hood” performs at BAMPFA’s “Full: Street Classical” event.