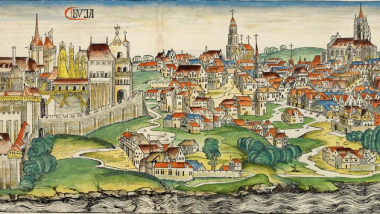 Of the seven European “Creative Capitals” featured as themes in this year’s [email protected] chamber music festival, Budapest is the most exotic to a Western-trained eye. Its language isn’t even Indo-European.

Its music often seems exotic as well, and that quality was the principal topic of the Budapest concert at the Menlo-Atherton Center for Performing Arts on Tuesday. Hungary, bursting with political nationalist desires, was also one of the most robust practitioners of musical nationalism and — as John R. Hale pointed out in an “Encounter” lecture at Menlo last Friday — a gateway west for other music from further east. The notes for this concert cited Rumanian and Bulgarian folk music as among the composers’ inspirations.

Hungarian nationalist composers did not limit their interest in folk music to quoting or imitating it. Béla Bartók, in particular, wished to evoke what he called the atmosphere, rather than the specific content, of peasant music. This concept was realized by the Calidore String Quartet in its performance of Bartók’s Fifth Quartet. After simply burning their way through Tchaikovsky’s First Quartet in a Menlo concert I heard two years ago, the Calidore players brought the same dry intensity to Bartók and made the prickly modernist sing.

Even though I’ve heard this group before, such transparency and utter clarity in performance hardly seemed credible to the ear. The music was full of sudden shifts of character or style exposed by this clarity. Each shift brought out an entirely different expression, while maintaining both a unity of structure and a sound world of high treble voices. The famous “barrel-organ” passage in Bartók’s finale, which here appeared with jaunty dissonance, was just one of the variety of sound panels which flashed by. The jumpy rhythms the composer heard in peasant music were all over the work. Playing chords in high-speed unison, the Calidore formed a mad machine, then broke apart buzzing into hurried cross-conversations, huge gulping glissandos, and ghostly dances. A few less high-treble sounds occurred in the softness of slower solo passages and in a rarely-heard Calidore specialty which emerged in Bartók’s Adagio molto, religiously reverberant chordal phrases.

Zoltán Kodály’s Duo for Violin and Cello, Op. 7, is a big work, three movements as large as a Bartók quartet. Though the work has only two players, Kodály keeps them so busy that it’s not thin music at all. Also folk-influenced in an abstract way, the piece features complex rhythms and miscellaneous specialized effects in a context of varying sonorities, less monochromatic than the Bartók. Violinist Bella Hristova and cellist Nicholas Canellakis showed total virtuosity all the way down. High wailing and light, shining double stops for violin and expressive, almost cruel-sounding, low tremolo growls from the cello were just some of the interesting sounds they produced. Sudden shifts in mood pivoting on ambiguous rhythmic phrases, rather as harmonic modulations may pivot on ambiguous chords, kept the piece continually startling and interesting.

The younger composer György Ligeti, before he emigrated to the West and became the avant-garde micropolyphonist he’s known as today, tried out being a Kodály-like folk-influenced composer. Hristova reappeared on stage to play second fiddle for Wu Jie in Ligeti’s brief Ballad and Dance for two violins, an imaginative collection of drones, canonic harmony, and Baroque austerity.

Then there’s Ernő Dohnányi, whose services to Hungarian musical pedagogy and concert life are unsurpassed, but who didn’t care to be inspired by Hungarian folk music. Instead, as a composer he was a late-arriving Brahmsian Romantic, but he did have one thing in common with Bartók and Kodály, a ruthlessly weird imagination.

Dohnányi’s Sextet in C Major, Op. 37, displayed its instrumentation in the seating arrangement: three string players over by the pianist on one side of center stage, with players wielding clarinet and French horn facing them. The clarinet and horn held the melody in a surprising military march in the middle of the slow Intermezzo movement, but otherwise kept cool as undominant members of the ensemble. This required great restrained virtuosity from hornist Kevin Rivard, and equally careful smoothness from clarinetist Anthony McGill.

This was only the beginning of the work’s oddness. Rather than employing the piano for heavy supporting chords as Brahms would have done, Dohnányi often had Gilles Vonsattel playing high shimmering chitter on the instrument, an unusual sound in Germanic music. Violist Matthew Lipman had just as many solo melodic leads as Hristova on violin, while cellist David Requiro was frequently occupied with elaborate churning rhythms. The light and comic finale was interrupted more than once by peaceful but incongruous salon waltzes for the strings. It was peculiar music that won its place with the other exotic pieces from Budapest on Tuesday’s program.

The chamber music festival’s virtual tour stops for Bach and Schumann in Saxony.

The Solo Violist, at Menlo

The music festival dedicates a recital to the much-neglected viola.