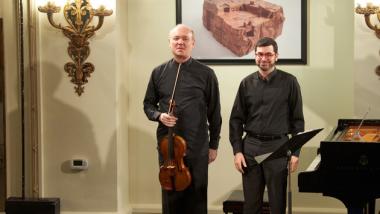 The Solo Violist, at Menlo

[email protected]’s “Carte Blanche” concerts this year included a set of recitals for each of the major string instruments with piano. It’s easy enough to program a long concert with music for violin or cello, but what about the viola? That was the topic of Sunday morning’s concert, the last in the set, at Stent Family Hall on the Menlo School campus.

Less epic in size than some “Carte Blanche” concerts, this outing with violist Paul Neubauer and pianist Michael Brown lasted an unexceptional two hours including intermission. The program included two large-scale multi-movement works and half a dozen briefer ones. All the music was 20th century, as there was little call for viola-based recital music before then and few viola virtuosi to play it. Most of it was fairly dour in temperament, as there’s something about the viola sound that encourages that mood.

That was certainly true of the keynote, Shostakovich’s Viola Sonata. Finished just a month before his death in 1975, it’s literally the final composition of a composer who’d already been death-obsessed for decades. It’s expansive in size but mostly quiet and inward-looking, featuring long-breathed chromatic melodies for the viola. There’s few of the startling tricks common in Shostakovich’s chamber music, though the central movement is a scherzo sounding like the composer chuckling mirthlessly to himself. It was paired with an encore of the composer’s brief and recently-discovered Impromptu from 1931 that received its West Coast premiere at Menlo’s “St. Petersburg” mainstage concert a week earlier. The Impromptu, slow except for a short quick section at the end, is far less tragic than the sonata, but not much more cheerful.

The other large work, Ernest Bloch’s Suite hébraïque, while as serious as the sonata, is far more outward-looking. The music is of a declamatory and heroic cast. More palpably Yiddish harmonic intervals than Bloch’s could be heard in one of the shorter pieces, Hakinoh (Lament) by Mana-Zucca, the working name of the American pianist Gizella Zuckermann. More seriousness could be heard in a long and rhapsodic “Romance” from a Suite for Viola and Piano by the English composer Benjamin Dale, and a free-standing Cadenza for solo viola by the Polish modernist Krzysztof Penderecki. The only cheerier works on the program — and they were lighter than air indeed — were a few salon pieces by Georges Boulanger (French, of Rumanian descent, and no relation to Nadia or Lili).

Menlo was fortunate to have Paul Neubauer available to perform this program. He is a violist of boldness and strong presence. His plucking of the hushed opening pizzicato in the Shostakovich sonata was strong and full. He kept up his attention-riveting presence throughout the concert, and only managed to sound retiring in a few places. A passage of harmonics at the end of the Penderecki formed the only moment in the concert when he seemed possibly tentative and unsure.

A strong sense of line is Neubauer’s most sterling quality. His determination to make the music flow made the long melodies in the Shostakovich sonata into a firm and direct narrative. He could display eloquence in unpromising passages of two notes alternating back and forth, and found the sequential line in successive difficult pizzicato chords. He was even more impressive in crafting a strong narrative from the disjointed fragments of Penderecki’s Cadenza.

In the opening descending phrase of the Bloch, Neubauer dropped through all four strings of the viola, exhibiting a tremendous variety of tone color, from piercingly metallic to deep and hollow. Abrupt switching between strings throughout the Bloch further exploited this variety, as did a crafty choice of strings for Shostakovich’s and Penderecki’s frequent double-stops. Like his sense of line, this kept the dark and somber music continually interesting.

In the lighthearted Boulanger salon pieces, Neubauer seemed to alter his technique of changing color by placing the bow at various distances from the bridge, creating sour or gruff sounds. He also displayed a little note-bending and some outright slides. In an encore — a rare treat at a Menlo concert — a folk piece he announced as “the Rumanian canary” (a bird already honored at the “Leipzig” concert), he created canary song by fluttering his left hand fingers around the very tops of the strings.

Throughout all of this, Michael Brown kept pace at the piano in what was almost invariably a supporting role. The heavy but sparse chords in the Shostakovich sonata were particularly well suited for Brown’s style. He could also do everything else up through light and bouncy.

The chamber music festival’s virtual tour stops for Bach and Schumann in Saxony.