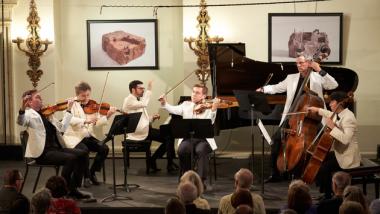 [email protected]’s survey of Europe’s “Creative Capitals” reached Leipzig this past Wednesday, in a concert at the Stent Family Hall on the Menlo School campus.

Never the political capital of anything significant (the capital of Saxony is Dresden to this day), Leipzig nevertheless looms importantly as a musical center. Both Johann Sebastian Bach and Georg Philipp Telemann lived there at various times in the early 18th century, and a century later it was home to both Felix Mendelssohn and Robert Schumann.

These four composers provided the repertoire for Wednesday’s concert, and an opportunity for listeners to consider how much musical style had changed in a century. The comparison was most obvious in a pair of works by Bach and Schumann, played by pianist Michael Brown and a somewhat overlapping group of string players.

Bach’s Concerto in D Minor, BWV 1052, was originally intended for harpsichord. Like Bach’s other harpsichord music, it’s frequently played on a piano. What made this performance a bit unusual is that the piano was matched with an orchestra of only five string players, one for each part except two for the continuo, about all that could fit on Stent’s tiny stage along with a full-sized modern Steinway grand.

That made it more of a chamber piece, which is not how the work is normally heard. The combination of the powerful modern piano and the tiny group of strings left the piano completely dominating the sound. Tutti passages were distinctly piano with strings, not the other way around. Even when Brown tried to suppress his part to allow the strings to display canonic figures, his keyboard runs still jumped out conspicuously.

Schumann’s Piano Quintet in E-flat Major, Op. 44, has, of course, only four string instruments to go with its piano. But the development of bolder, heavier string writing and a change in expectations since the Baroque as to what a strings-and-keyboard work should sound like means that this combination gives no sense that the balance is odd.

What distinguished this performance of the quintet was the disjunction between the extroverted Florestan and tender Eusebius sides of Schumann’s personality. Florestan passages, particularly the bulk of the scherzo, bounded with energy but were kept under firm ensemble control. It was the quieter Eusebius passages that went wild, with generous applications of rubato, particularly from first violinist Aaron Boyd, and sudden emphases like bones sticking out in the middle of the music from Paul Neubauer, who seemed determined to make his viola the most prominent voice in the ensemble. Keith Robinson, by contrast, kept his cello so humble that it could barely be detected as a separate instrument. Second violinist Alexi Kenney followed Boyd’s style more than Neubauer’s.

The same kind of energy that kept Florestan running was used to perk up Bach’s dour-toned all-minor-mode concerto. Though Bach can seem grim, this was a lively and upbeat performance of considerable charm and clarity. Boyd and Kenney also played in this; the other performers were Matthew Lipman, viola, David Requiro, cello, and Scott Pingel, bass.

Clarity was also the virtue of Mendelssohn’s Andante and Variations for Piano, Four Hands, Op. 83a, which Brown, on bass, played with Hyeyeon Park, on treble. The variations succeeded each other with freshness and distinct differences in character. Park showed a more flowing, legato style than Brown, but not so much that they were not well-paired.

For charm and a sense of goofiness welcome in Menlo’s solemn precincts, nothing could outdo contralto Sara Couden’s performance of the fourth work on the program, Telemann’s Canary Cantata. Secular cantatas on unlikely subjects were a Baroque specialty; Bach’s Coffee Cantata is the most famous. This one is a funerary lament for a dead pet canary. Telemann pours all the pathos of early Italian tragic opera into his music; this is transmuted to bathos by the libretto’s intense devotion to the tiny subject of the mourning. Couden milked this contrast with avidity, pouring audible sobs and wails into her deep, thick-toned voice, backing it up with grieving facial expressions and gestures of futility, even grasping at her clothes.

The lament for the loss of the bird’s songs and charm is varied with outbursts of anger at the culprit for its death, which the singer calls “stern Brother Death” (“der strenge Bruder Tod”). This allegorical figure is the cat that ate the canary for breakfast. Cat-lovers will not be happy here; this libretto takes the same view of cats as do old Warner Brothers cartoons. “What do you want next?” the singer asks the cat (I’m paraphrasing), “a parrot or a raven? May the bird peck your stomach out!”

With the amount of wailing and typically-Italian repetitions of lyrics in the cantata, a sense of drive is necessary to keep the music from sagging. Couden and the ensemble applied the same energy that was shown in the Bach and Schumann, and it came off fine. The instrumentalists were a mixture of the string players from those other two works, plus Gilbert Kalish on a harpsichord that was lifted on stage for this piece alone.

Special note should be taken of two of the performers at this concert. David Requiro was outstandingly lucid as instructor in that morning’s master class, urging the young string players in works by Arensky and Dvořák to give thoughtful consideration to their choices in bowing and vibrato. Alexi Kenney, as Paul Neubauer pointed out at the curtain call, is the first performer in Menlo’s 16-year history to have appeared in all three of its artistic programs: first in the Young Performers Program, then the International Program, and finally this evening for the first time as a mainstage artist.

The preceding Prelude Performance, across the way in Martin Family Hall, offered treasures of its own. Cellist Connor Kim and pianist Chelsea Wang gave a gently melodic account of Mendelssohn’s fairly lively Cello Sonata No. 1, and an ensemble of other International Program Artists was burningly acidic in an exciting and vivid reading of Ernest Bloch’s often microtonal Piano Quintet No. 1.

This year's festival takes world-class jaunt through the music capitals of Europe.