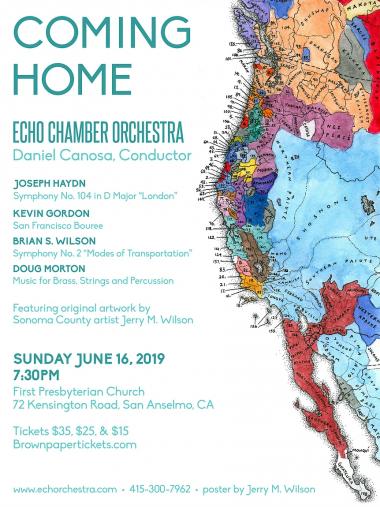 It’s unusual to hear an orchestral concert mainly of new music. When all of those works are by local, living composers, it is a rare treat. On Sunday evening, ECHO Chamber Orchestra, led by Music Director Daniel Canosa, paid a refreshing tribute to North Bay Area talent with a program aptly titled “Coming Home.”

The three featured composers were all in attendance at the concert at First Presbyterian Church in San Anselmo and all and gave warm introductions to their works, in place of program notes, enhancing the intimate and cozy atmosphere. The concert was dedicated to former orchestra member, violinist and violist John Konigsmark, who passed away recently. Incepted in 2015, ECHO’s website says that the fully professional group rehearses “collaboratively” alongside its conductor, and they curate the concerts together as an orchestra.

The concert began with San Francisco Bourée by composer and bassist in the orchestra Kevin Gordon. In his introduction, Gordon noted that the Baroque-influenced piece is a movement from a larger work that he and Canosa are co-composing and will feature in next year’s season. Gordon was inspired by a scene at the end of the tunnel at Park Presidio Avenue in which he heard the buses, clamor of crowds and kids, and also felt the fog rolling in. The opening of the piece did sound Baroque, cheerily reminiscent of Bach’s Brandenburg Concertos. The music quickly descended into minimalist, percussive notes in the strings and beautiful, lush scales in the winds. The music conveyed an image of San Francisco’s cultural vibrancy juxtaposed with good ol’ Karl the fog.

Brian Wilson, a composer from Sonoma, described his four-movement work, Symphony No. 2, Modes of Transportation, as “impressionistic.” The second movement, “By Foot,” he called a “John Muir piece. Imagine walking through a beautiful forest.” Eerie and expressive, the orchestra conjured an image of perhaps a forbidden forest or Muir Woods at nightfall. The third movement, “The Wheel,” is, Wilson notes, a comical tango written with five beats per measure in place of the usual two or four. With the lower strings plucking a Carmen-style habanera, each section of the orchestra was layered on one by one, charmingly so, and the clarinets were featured in the dance.

The world premiere of Doug Morton’s Music for Brass, Strings, and Percussion was a highlight. Hailing from Novato and drawing inspiration from Bartok’s Music for Strings, Percussion, and Celesta, Morton features impressive percussion duets between Christopher Foster Howes and Robert Hamaker. The tubular bells tolled, layering on the ominous timpani and then blanketed by the orchestra’s Halloween-styled dance. In the end, the strings plucked their instruments in an intentionally cacophonous fashion, tapering off like raindrops, a surprising and engaging finish to the work.

Equally at “home” with standard repertoire, the orchestra ended with a classic, Haydn’s last symphony, No. 104 in D Major “London.” Their energy sparkled and conductor Daniel Canosa conducted with gentle and expressive ease.

I would be remiss to leave out mention of the stunning graphic design on the concert’s poster by Sonoma artist Jerry M. Wilson features a portion of his work The Indigenous Languages of North America, containing a colorful map of the Pacific coastline. Wilson also created a beautiful, mystical array of butterflies on the concert program, setting the scene appropriately with the church’s setting in the serene greenery of San Anselmo and the smell of pine.

Audience members were all invited to a post-concert reception at the church where they could converse freely with the composers. Overall, the ECHO orchestra and team excel in audience engagement, making both curation and performance choices with the community in mind and celebrating local art and talent.

Delirium Musicum shows its mettle in a wide-ranging program with a world premiere.

Ives Collective’s Concert Is Truly “All in the Family”

The small Marin-based orchestra is made up of seasoned professionals united in their love of making beautiful music.