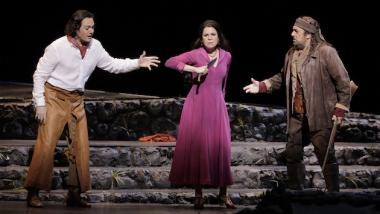 El Gato Montés Is Right at Home on the Opera Stage

These days when people refer to “a dynasty” they’re generally talking about sports.

Los Angeles has had its share of those, but it also has a one-man operatic dynasty, the indefatigable Plácido Domingo, whose performance in Verdi’s Otello, on Oct. 7, 1986, heralded the arrival of the Los Angeles Opera Company.

Since then, Domingo has appeared onstage almost every season. Behind the scenes he has helped to guide the organization as its first artistic advisor (now general director), and in the pit wielding his baton.

Saturday, Domingo, now 78 and a baritone, once again took to the stage of the Dorothy Chandler Pavilion to perform the 151st role in his repertory as the brooding bandit, Juanillo, “The Wildcat” in Manuel Penella’s 1916 zarzuela, El Gato Montés. This vibrant production from the Teatro de la Zarzuela, Madrid also stars mezzo-soprano Ana María Martínez as the love-torn heroine, Soleá, and the Operalia-winning tenor, Arturo Chacón-Cruz, as the rising star matador, Rafael Ruiz, “El Macareno.”

The production is conducted, with a flair for pacing, color, and atmosphere, by Jordi Bernàcer and is accented by an abundance of flamenco-style dancing choreographed by Jesús Ortega and Cristina Hoyos (from Seville), whose dancers ignited last season’s L.A. Opera production of Carmen. The direction is by Jorge Torres.

Even though the history of zarzuela dates back to the Baroque era and now boasts a repertory of over 10,000 compositions, few major opera companies outside the Spanish-speaking world have ever staged one. The major exception is Los Angeles Opera, principally due to Domingo, who has championed the art form.

Penella’s El Gato Montés  is in every sense a grand, sung-through opera that clearly reflects the influence of the Italian verismo style of Pietro Mascagni and the melodic flow of Puccini. The music is richly orchestrated, but at the same time, the music has a distinctly Spanish flavor reflecting the influence of flamenco, and dance music  which is woven throughout the opera.

Domingo’s  motto is, “If I rest, I rust.” There was nothing rusty about Domingo’s performance as “The Wildcat.” From the moment he made his entrance — dusty, sullen, and menacing — and displayed that amber-hued voice, he was in full control. His attraction for the woman he was forced to abandon, Soleá, was tangible, as well his long-smoldering hatred for the cocky young matador who now possessed her.

Last season, as L.A. Opera’s Carmen, Ana María Martínez demonstrated her ability to play a captivating woman caught in the midst of a tragic triangle of passion. She brought the same intensity and statuesque presence to her performance as Soleá. Her performance combined smoldering sensuality and deeply felt emotions with a darkly hued mezzo-soprano voice that rang out in her arias and blends like Spanish chocolate in her duets with the two men in her life. A native Spanish speaker, she is also totally comfortable with the opera’s Spanish vocal inflections.

You could almost see a young Plácido Domingo in the performance by Arturo Chacón-Cruz as the matador of the moment, a young man with cape work and ego to spare. His performance combined a sense of youthful machismo and ardent passion with a ringing tenor voice.

The visual scheme of the production, designed by Francisco Leal with costumes by Pedro Moreno, began minimally then grew to include an enormous gilded mirror in the matador’s dressing room and an altarpiece depicting the weeping Madonna.

With this production, L.A. Opera makes the case that El Gato Montés deserves a place in the operatic repertory, something Plácido Domingo has known all along.