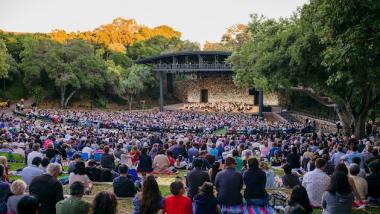 Gemma New Shines In Debut With the SF Symphony

The music was only the centerpiece last week to the San Francisco Symphony’s first visit to Stanford University’s Frost Amphitheater in nearly 40 years. Guest conductor Gemma New led Beethoven’s Ninth Symphony with, as a prelude, Ravel’s song cycle Shéhérazade on Saturday, in the second of three concerts. The newly refurbished amphitheater was as much the focus of attention as the music or performance.

The process of getting there also demanded attention. Frost is hedged about with all the metal detectors, ornate and mystifying rules forbidding concertgoers from carrying this or that, and confiscatory parking fees now familiar to attendees of amphitheater popular-music concerts, though they may be surprising to the untutored classical listener. It is certainly much easier to navigate this if a member of the party is a certified and placarded disabled person, though despite Frost’s increased amenities, it can still be a long walk from a mid-row seat out to the restrooms.

Visually, Frost is stunning. The imposing rock wall behind the stage, bathed in soft colored lights, merges with the surrounding earthen berm and trees as a noble background while the sky slowly darkens during a 7:30 p.m. concert. It’s comfortable, too. Folding chairs with cushioned seats fill the lower section of the bowl, placing audience heads roughly level with the stage, while more agile patrons lounged on their own blankets on the grass in the upper levels.

Sonically, the venue is more mixed. Of course, fine, curated acoustics are not to be expected outdoors, no matter how tightly enclosed the amphitheater may be. Seated directly in front of the stage-left speakers about 14 rows back from the stage, I found that, during the vocal music, the orchestral sound came largely directly from the instruments, while the singers were audible principally through the speakers. This gave the disconcerting visual illusion that they were miming to themselves. At least the amplification was kind to the voices. It was less good to the orchestra during Beethoven’s instrumental music, where it could be spotty and inconsistent. The sound lacked resonance, phrases got swallowed up unexpectedly, and the tone quality could be poor. The timpani in Beethoven’s Scherzo sounded like someone banging on a can.

Surprisingly, since painting with a large and garish brush is the rule at outdoor summer concerts, Ravel’s light and delicate music fared better than Beethoven’s on Saturday. It was helped immeasurably by New’s brilliant conducting of the piece. She coaxed a bold lyric flow from the instruments in their accompaniment. Between verses, the orchestral sound would surge into passion, enough so that the listener could almost pretend to be hearing Rimsky-Korsakov instead.

Mezzo Kelley O’Connor, relishing a much greater solo opportunity here than offered her in Beethoven’s quartet, poured out Tristan Klingsor’s gaudy French verses with energy, expression of personality, and the occasional unexpected pronunciation.

Leaving aside the acoustics, New’s interpretation of Beethoven was solid and satisfying. She took the first two movements in a moderate tempo but with tremendous drive. Varied expressive treatment of Beethoven’s repeating phrases kept the evenly-paced performance interesting. By contrast, both the slow movement and the Ode to Joy, though they built up energy as they went along, began very slowly, with hushed contemplation. The introduction of the main theme in the Ode gave off a sense of holy reverence.

Among the solo singers, O’Connor and soprano Mary Evelyn Hangley looked as well as sounded as if they were enjoying themselves. Tenor AJ Glueckert gave his lines affably. Bass Adam Lau was more problematic. He mugged his expression and warbled his voice, and his deep timbre did its best to overload the amplification while not being enough to enable him to reach his low notes with ease. The Symphony Chorus, under its assistant director, David J. Xiques, was as brilliant as always. Not even Beethoven’s most precarious entrances could daunt these superb singers in their appointed rounds.

The rising New Zealand conductor talks about taking the podium with the SF Symphony this month.

S.F. Symphony takes to the brand-new stage on July 10.