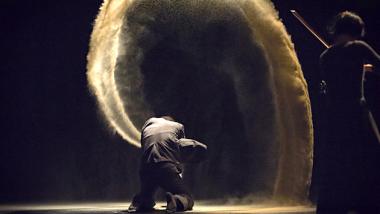 Giving and Receiving in AMOC’s With Care

After a long silence in the pitch-black ODC Theater, a square of light appears. Four people stand at each corner. The silence stretches on — uncomfortable but powerful. This is the starting point of the strange, new dance theater work With Care, which played at ODC on Saturday.

Even in those soundless moments, the connection and trust between this quartet is clear. They are here to perform giving and receiving care, but they are bound by more than this show. Two are married, and all are members of an unusual ensemble. In just its second season, American Modern Opera Company is a collection of singers, dancers, and instrumentalists who create and perform new music theater pieces together. The company envisions deep, long-term artistic relationships at the core of their work.

The square breaks; three of the artists leave the stage. A very long pause. Miranda Cuckson puts her violin under her chin and begins to play.

The music, Reiko Fueting’s tanz.tanz, is neither easy listening nor easy playing. Quick alternation between plucking strings and scraping with the bow, lots of chords, and a punishing top note make high technical demands. Harshness and soothing melody trade off, sometimes very quickly, as With Care moves through Cage, Bach, Wesley, improvisations, and Aucoin. Putting it all together is not easy, either, but maybe we’re not meant to.

Cuckson, playing a slow, soulful tune, is interrupted by Keir GoGwilt, sawing with his bow so furiously you can see the hairs fly. The soundscape of also includes the clattering of wood pieces, the thumping of a sandbag, the whoosh of a bow cutting through the air, and the dancers’ heavy breaths. The final segment of the score — a world premiere by composer Matthew Aucoin — features a steady drone on one violin, while the other moves from a folksy melody to jagged screeches. A loop keeps the last sounds going even after both players set down their violins.

Gaga — the movement style created by former Martha Graham dancer Ohad Naharin, which dancer-choreographer Bobbi Jean Smith hails from — focuses on bodily power and awareness rather than achieving a particular visual aesthetic. Dancers are encouraged to interpret a set of instructions (instead of copying a set of moves) and to rejoice in uninhibited, pleasurable movement.

Given With Care’s erratic score, even the most traditionally dance-like portions of Smith’s postmodern choreography must conjure up imaginary rhythms. That seems difficult, but so does everything else about the dancing. Smith previously impressed critics and audiences with her piece A Study on Effort, and her and Or Meir Schraiber’s movements here are ostentatiously effortful. Sometimes the effort shows in frantic writhing; other times, it’s in the jerky precision of Smith’s steps or the overly wide spread of her toes. The visible control over every muscle only relaxes when Schraiber and Smith dance together, carrying each other, holding each other up, shifting the form of their intertwined bodies.

With Care communicates with shapes rather than a clear narrative. Pictures and movements full of sharp edges soften when the dancers are together. The theme of mutual support extends past the dancers’ bodies in a sequence where GoGwilt balances pieces of wood to create miniature lean-tos. Near the end of the piece, after a total blackout, the light reveals a two-person violinist, with Cuckson holding the violin and GoGwilt wrapped around her, mostly hidden behind her back. GoGwilt holds the bow. In an impressive piece of coordination, the two violinists play as one, until they untangle themselves and settle into a silent hug.

That would be an uplifting and awe-inspiring finale, but With Care instead finishes on a bitter note. The music stops, and Smith begins declaiming jarring, unfinished sentences. Schraiber brings out two planks and tries to create a large lean-to, but their lengths are too different — they refuse to balance.

The overall effect is impressive but unresolved, physically demanding but psychologically lacking. The movements and sounds of With Care captivate despite — because of — their lack of conventional beauty, but the piece fails to communicate deep emotion or meaning.

With Care Blurs the Boundaries Between Movement and Music