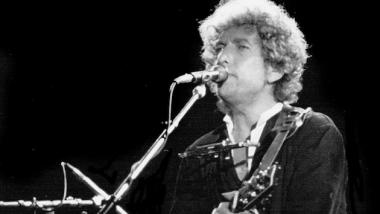 Redwood Symphony’s concert on Saturday, November 18, at Cañada College in Redwood City, offered insight into a philosophical conundrum of music normally far removed from the classical.

The question is: In popular songs with a political or moral stance, in which the point of the song is the message in the lyrics, what is the role of the music — the melody and accompaniment — in conveying that message?

Our texts for consideration are the songs of Bob Dylan. His lyrics can be read as poetry and have been published as such. He has a Nobel Prize in Literature, which would seem to be the final seal of approval. Yet his work is still mostly encountered as songs. When Dylan was given a special Pulitzer award nine years ago, one critic worried that, though deserved, it was inappropriate, saying “his accomplishment can’t even remotely be measured purely on the page.”

Perhaps we can test this by taking a distinguished composer, a Pulitzer winner himself, one so wrapped up in his own work that he had never heard Dylan’s songs, giving him these lyrics purely as poetry to set to his own music, and listening to the result.

John Corigliano did this in 2000, and his resulting song cycle, Mr. Tambourine Man: Seven Poems of Bob Dylan, was sung by soprano Diane Squires and conducted by Redwood Music Director Eric Kujawsky (now going by “Eric K” or “Dr. K”) at Saturday’s concert.

The settings are entirely different from the originals. “Blowin’ in the Wind” becomes a dirge, “Masters of War” a scream of rage, “Clothes Line Saga” a quiet American pastoral, “Chimes of Freedom” a rousing patriotic hymn. Dr. K suggests they’re deeply disconcerting if you know Dylan’s melodies, but not if you don’t, a proposition I could confirm because I’d known only two of the seven. (This gap in my cultural education helps me to believe Corigliano when he says he had not known any.)

Dylan’s folksong-like settings emphasize the structure of the lyrics, the lines and verses that make them up, creating a container that lets the words speak for themselves. Corigliano, while not ignoring the forms of verse and chorus, focuses intensely on the meaning of the individual words and phrases as they come up, altering his style abruptly in response.

Squires, known for her work in the genteel operetta tradition, was full-voiced but far less melodramatic than the new-music specialist Hila Plitmann on CD. Squires kept even the furies of “Masters of War” down to a roar. Corigliano directs that the singer in the orchestral version of this cycle be amplified, to keep the orchestra from drowning her out in non-operatic singing; this did not entirely succeed in Saturday’s performance.

In the end, I prefer the subtleties and coolness of cover versions of Dylan’s settings, and their greater tunefulness, but the classical art song tradition has long shown the value of intense, idiosyncratic settings. I count this thoughtfully crafted cycle as among the most successful and memorable Corigliano vocal works that I’ve head.

Not giving his audience a break from the daring, Dr. K programmed Bartók’s The Miraculous Mandarin — the entire half-hour ballet — for the concert’s other half. Though now over 90 years old, this music is still as “hellish” (the composer’s word) as the story it tells. Much of the work sounds like a hideous traffic jam on the Bayshore Freeway, yet it’s fascinating and gripping to listen to. The music closely reflects the story, but the story — a gang of thugs seduce, rob, and murder the title character — is little-known. So it helped tremendously to have the stage descriptions, taken from the published score, posted as supertitles as each scene or event passed by. The Redwood Symphony’s intense commitment to this difficult and brutal, yet brilliantly imaginative, music entirely overcame occasional awkwardness in the non-professional performance.

Evoking Dylan and the Desert