Inheritance is an opera meant to spark meaningful conversation on issues that touch all our lives.” — Susan Narucki, producer and soprano lead.

Less than two years after its world premiere at UC San Diego, Lei Liang and Matt Donovan’s one-act chamber opera, Inheritance, has received a definitive recording on CD (Albany Troy1819). In a project sparked, in part, by the astounding Susan Narucki (Sarah Winchester), whose three decades before the public has helped generate a sizable number of recordings and premieres, Inheritance uses the life of psychotic spirit-consulting Sarah Winchester (1840–1922), daughter-in-law of Winchester Repeating Gun Company founder Oliver Winchester and heir to the Winchester fortune, to examine America’s “inheritance” of her murder-ridden karma. 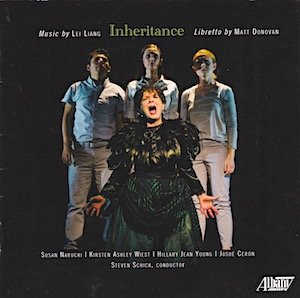 Donovan’s libretto sets the opera in the Winchester Mansion, a sprawling residence to which Sarah Winchester continually added rooms. Through the other characters — Ghost 1 (high soprano Kirsten West), Ghost 2 (mezzo Hilary Jean Young), and Ghost 3/Travel Guide (Josué Cerón) — we learn of her troubled mental state, and are invited to confront the consequences of a weapon that was used to murder countless Native Americans and others.

Without question, the opera’s strongest element is its huge and varied double battery of percussion, conducted by the famed Steven Schick, that sings, pounds, gongs, rattles, and shoots to oft-startling effect throughout the recording’s 51:16 minutes. Surmounting the sonic limitations of the CD medium, engineer Andrew Munsey and veteran producer Judith Sherman’s sonic tour de force opens with a huge percussive barrage intended to stop us in our tracks. If you set the volume at the correct level for the vocal soloists, it will. For the orchestral tapestry alone, especially the ghostly mix of Eastern, Western, and African percussion with two clarinets, trumpet, guitar, harpsichord, contrabass, and voice, the recording is highly recommended. As I write these words, I’m waiting to hear if hi-rez files exist. If they do, they’ll certainly provide many an audiophile system with a thorough workout.

Given that neither soprano has a conventional voice, the supplied libretto is essential for understanding their words when the women ascend the scale. Mezzo Young’s rich, more conventionally operatic instrument provides excellent color contrast, and her diction is mostly comprehensible. Cerón’s fine baritone is another asset, but his accent will sometimes send you back to the libretto.

Vocally, the high point is Winchester’s extended aria in Scene Eight, “Once, In New Haven,” which begins as Sarah reflects on the premature death of her daughter. Equally resonant is her final line, “When will this repeat no more?” — which leads to Sarah’s final soliloquy/coda.

Narucki sounds more than a little self-conscious when she speaks — the effect may be intentional, to indicate psychosis — but once she starts singing, she’s in her element. That element, as you’ve no doubt already gathered, is awe-inspiring.

But the opera has one major issue: The libretto, by the director of the Poetry Center at Smith College, is rather prosaic. When I attempted to describe my dissatisfaction to my husband, he asked, “Where the conflict? Where’s the struggle?” That’s the problem; the opera has nowhere to go. Sarah Winchester is caught in her own shattered mental state, and keeps building more and more rooms in which to hide. She is trapped, and everything haunts her.

We watch all this, hear her story and questions, and sit in awe as Pulitzer Prize in Music finalist Liang’s kaleidoscopic score unfolds. But beyond the music’s major “wow” factor — it will certainly leave you wishing to explore more recordings of Liang’s music — librettist Donovan does not take us to a place of revelation. At opera’s end, I found myself wanting to revisit the recording most for the orchestral music’s color and visceral power.

David Hertzberg’s The Wake World is a sumptuous pleasure house of music.

The Parting Tells a Story That Must Be Heard