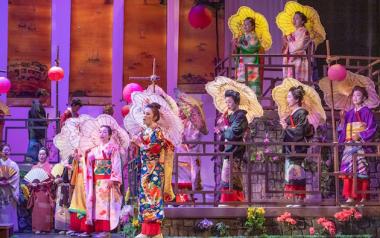 Since its debut production, Trouble in Tahiti in 2011, Pacific Opera Project (POP) has managed to carve out a niche for itself in a town overshadowed by the star power and operating budget of the Los Angeles Opera. Led by its inventive and flamboyant artistic director, Josh Shaw, the company has developed an exceedingly loyal following by entertaining them with productions featuring young singers in zany settings of traditional operas: a hipster La bohème, a Dick Tracy Don Giovanni, a video-game-inspired Magic Flute. And their ticket prices are reasonable.

The company’s latest production, however, is on a visual scale beyond anything it has taken on before — a sumptuously costumed, fully staged, bilingual co-production (with Houston’s Opera in the Heights) of Puccini’s Madama Butterfly. It’s uniqueness, however, lies in the fact that Japanese singers perform the Japanese roles in Japanese, while the American characters are appropriately cast and sung in English. The bilingual libretto is by Josh Shaw and Eiki Isomura.

Drawing on its audience base and support from the Japanese community, Saturday’s opening night at the 880-seat Aratani Theatre in Little Tokyo was a sellout, with subsequent performances scheduled for April 13 and 14.

The goal of the production, the company said, is to encourage the audience “to hear the difference between the lovers’ cultures through their mutually incomprehensible languages. Allowing each character to sing in their native tongue brings into stark reality just how far apart Pinkerton and Cho-Cho San actually are.”

The opera has been presented in a remarkable range of interpretations. It could be argued that a skillfully directed and designed production sung in the original Italian can make the story’s clash of cultures and tragic outcome illuminating. For sheer strangeness, nothing can compare with the incredibly over-the-top staging by Ken Russell that had Cho-Cho San acting out a Betty Crocker American fantasy scattering corn flakes instead of cherry blossoms, and ending with the dropping of the atomic bomb on Nagasaki.

What makes the production unique is its sense of cultural accuracy. It contrasts the ancient culture and customs of Japan with the puffed-up arrogance (and innate racism) of the new imperial power on the block, America, and its Teddy Roosevelt brand of “Big Stick” diplomacy.

Of the key supporting characters, Kimberly Sogioka (as Suzuki), Steve Moritsugu (as Prince Yamadori), Hisato Masuyama (as the Bonze), Norge Yip (as the Imperial Commissioner) and Takuya Matsumoto (as the Registrar) sang entirely in Japanese, accompanied by the South Bay Singers Japanese chorus. The 22-member orchestra was conducted by Eiki Isomura, with simultaneous translations in Japanese and English projected above the stage.

For Janet Todd, opening night turned out to be one of those star-making moments. Slated as the cover for Keiko Clark, Todd (who is far from fluent in Japanese) was notified that she had less than a week to get up to speed and go onstage. When asked for an explanation for the last-minute substitution, the only response offered from the production’s director was, “no comment.”

From her demure entrance to her tragic suicide, Todd captured the transformative journey of her character, from naïve innocent to mature womanhood. She has a melodious soprano that can blossom to dramatic fullness. She may have cut off the final note of “Un bel di” rather abruptly, but that can be forgiven. In every other way Todd’s performance was impressive and skillfully detailed.

Peter Lake’s Pinkerton was less nuanced but was also vocally effective. Lake has a nicely toned, less-than-towering tenor voice that remains confident throughout its range and blended excellently in the ensembles and his Act I duet with Todd. Dramatically he captured Pinkerton’s boorish nature, arrogance, and lack of any sense of cultural sensitivity.

In contrast, Kenneth Stavert’s performance as Sharpless depicted a professional diplomat who sees the tragedy to come, but is powerless (or incapable) of preventing it. What was particularly impressive was Stavert’s ability to move fluidly between English and Japanese.

The set design is also by Josh Shaw with atmospheric lighting by Bo Tindell. The costumes are by Sueko Oshimoto. The chorus director is Naoko Suga.

It’s hard to know if this Japanese/English libretto will catch on, but Pacific Opera Project deserves a great deal of credit for making this concept into a reality.

Pacific Opera Project Does It to Rossini's La Gazzetta

Fun, silliness, and some great music abound in the West-Coast premiere of this buffa rarity.

It's a "gagland" production with a dedicated, appealing cast.

A Madama Butterfly with Hard Edges

Leslie Swackhamer’s revival of the Jun Kaneko production at S.F. Opera is as forcefully anti-imperialist as the opera will allow.