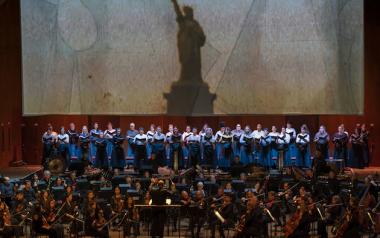 Delivered with any less gravity, the choir of over 30 women snapping oversized sewing scissors open and shut above their heads — for a sort of belabored, mechanical applause — might have warned of bargain-bin horror. But emerging from the piercing textures of Julia Wolfe’s Fire in my mouth, the New York Philharmonic co-commission receiving its world premiere on January 24, the glinting tools sounded an unmistakable call to arms.

Much of Wolfe’s writing concerns American labor history as told by its survivors. Like her Pulitzer-winning Anthracite Fields, which explores the lives of coal miners in her native Pennsylvania, Fire in my mouth was an archival project: the libretto is a bricolage of oral histories, folk songs, speeches, and a list of garment-making materials related to the Triangle Shirtwaist Factory Fire of 1911, a result of abysmal conditions at a New York garment factory whose employees were largely young, immigrant women, and the subsequent reform movement.

In Wolfe’s four-part oratorio, each of those 146 victims receives a face, with the equivalent number of singers assembled to enact Wolfe’s libretto in both music and movement. Over 30 women from the Philadelphia-based choir The Crossing and over one hundred girls from the Young People’s Chorus of New York City swayed, pointed their fingers in the air, and wielded the photogenic scissors as they sang. The girls’ choir, descending thunderously into the aisles during the third movement to sing inches from those in orchestra seating, provided an aching parallel to their older counterparts. In maturity and raw heft, and long skirts and high-buttoned shirts as the Triangle workers would have worn, the age difference was all but elided.

War was the tenor of Wolfe’s score. The orchestra writhed, sending up drumbeats, percussive swipes, and endless sweeping scales for an atmosphere of complete alarum. In the “Factory” movement, with the string sections smashing their bows against their strings, the players joined to conjure a seething sewing machine.

Inspired by her many walks downtown past the fire’s site, Wolfe’s selection proved timely as the work unfolds, documenting a generation of young women galvanized into protest by longtime injustice. Wolfe’s own selection is further evidence that the Philharmonic under Jaap van Zweden, several months into his tenure as music director, has thought long and well about programming that ruptures old confines.

The video projections above the stage were unfortunately a reel of diligent efforts to explain the obvious, among them an image of a bird in flight and the Statue of Liberty accompanying text about freedom and transit to the United States. Occasional abstract uses of historical footage sometimes furthered the music where aligned in particular rhythms. Yet the projections were more often than not distracting and heavy-handed, particularly when displaying the text of the oratorio as it was being sung — like the titular “fire in my mouth,” a potent enough phrase without the PowerPoint-esque visual aid.

Steven Stucky’s Elegy, likewise inspired by American tragedy, provided the program’s somber introduction. Stucky, who died several years ago, wrote Elegy as the seventh part of a twelve-movement work regarding the death of three black civil-rights workers killed in the course of trying to enfranchise other blacks. Deep-throated solos, especially from the quartet composed of principal players and brass, gave this short work depth, groundless though the ending seemed.

In the evening’s bright patch, the effervescent Anthony McGill extracted what he could from Copland’s lively if trifling Concerto for Clarinet and String Orchestra, evocative at points of a popcorn machine left to its own devices. Essentially a chamber work, Copland’s concerto features the soloist and accompaniment in animated dialogue. A slow promenade at the start was overtaken by impish, jazzy tumult, navigated with finesse by McGill and orchestra.

En route to taking their places onstage between sections, swaths of the girls’ choir began whispering excitedly to each other; those closest by seemed most concerned with the number of times they had been asked to sing the word “fire.” Whether they were protesting performance decorum en masse or had been instructed to babble as though they had not been singing about starving was unclear but did not matter. Those who die too young often enter our memories distinguished only by the horror of their premature passage, not the brief effort they spent living.  For a few moments, the living was all you could imagine.

Jennifer Gersten is a violinist pursuing her DMA at Stony Brook University. She is a senior editor for Guernica: A Magazine of Global Arts and Politics, and has held internships at NPR Music and The Blade, a paper based in Toledo, Ohio. Her reporting, essays, and music reviews have been published or are forthcoming in The Kenyon Review Online, The Awl, NPR Music, Guernica, Harvard Magazine, WQXR, and Bachtrack.

The plight of Appalachian coal miners is revealed through powerful music and stark imagery.