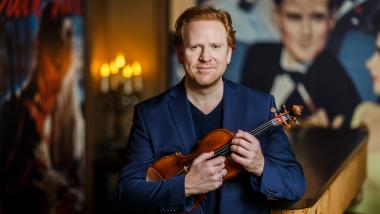 Did you know that San Francisco has 19 official Sister Cities? Zurich numbers among them, and one resource these two towns share is violinist Daniel Hope. He is music director of the Zurich Chamber Orchestra, and he also joined New Century Chamber Orchestra for its 2017–2018 season as an artistic partner. On Friday evening at Herbst Hall, his two string orchestras shared the stage in a rare, one-night only concert.

Both ensembles are conductorless; Hope leads them as concertmaster. The two groups initially took turns performing, and the evening began with NCCO playing Bartók’s Romanian Folk Dances. This short, six-movement suite was originally written for piano, but the expanded palette in this orchestrated version delights. Born to be both a soloist and a leader, Hope radiates assured energy. It was immediately palpable in the pulsating rhythm underpinning the start of the first dance. Especially the third and fourth movements paraded Hope’s skills as a soloist, whereas the final two — a polka giving way to an even faster dance — demonstrated the fervent vitality of the whole ensemble.

Next, the Zurich team came out to play Mozart’s K. 138 Divertimento. Elegant and dignified, these three movements almost made the Bartók seem raucous in hindsight. The first sounded like the composer — who was only 15 at the time — was practicing for writing opera buffa, and the musicians brilliantly conveyed its lighthearted wit. The inner Andante was remarkable for both its gorgeous violin melody and its breathtaking soft moments. And the fast finale confirmed one commonality these two ensembles certainly share: a gripping, undeniable, irresistible joie de vivre.

Zurich Chamber Orchestra stayed onstage for the next piece, which was a movement from a concerto written by two composers, one living and one historical. The historical one was Vivaldi, whose music today is sometimes the victim of its own popularity. It’s heard in concert halls as art, but also everywhere else as quintessential elevator music. We hear it so frequently that people often overlook actually listening to it. And especially with pieces as popular as his set of violin concertos known as The Four Seasons, trying to listen with fresh ears is as impossible as trying to love as though you’ve never been heartbroken before.

Composer Max Richter — a friend and collaborator of Hope — sought to redress this über-familiarity. His Recomposed drastically refreshes Vivaldi’s Four Seasons by recasting its familiar thematic material amid contemporary compositional techniques. On Friday, Hope and ZCO performed the last movement from Richter’s recomposed “Summer.” In the hands of these musicians, Richter heightened the drama of Vivaldi’s suspenseful, stormy finale to meet modern, movie-worthy standards, and also gave it a darker, scarier ending.

After three pieces, the two ensembles finally joined forces for Grieg’s Holberg Suite. Written near the end of the 19th century, this neo-Baroque piece references old dance forms. And like the Bartók, it was originally a piano piece. It’s in five movements and, especially in the second and fourth, the cellos proved that Hope was hardly the only musician onstage capable of wielding luscious melodies.

As exceptional as this merger indeed was, Friday was a celebratory night for NCCO for reasons ranging beyond hosting their Swiss colleagues. Their annual gala followed the concert (which explains why the performance — branded a “rush-hour” event — had to happen at the weirdly early hour of 5:30 p.m.). And before the encore, NCCO’s leadership announced their decision to officially make Hope the ensemble’s new, permanent music director. The execs explained they had been searching for both a talented musician and a deep heart and had found both in Hope.

The encore was the joint ensemble playing Mahler’s unfathomably exquisite Adagietto from his Symphony No. 5. When Hope introduced it, he said performances range from seven to 14 minutes, depending on the conductor, and cheekily promised that his would fall somewhere in between. He also said part of the allure of performing this movement is that people say it cannot be done without a conductor, which he wanted to prove wrong.

The combined group did pull the Mahler off without a conductor, but not without a strong principal violinist. Rather like the benevolence that Sister Cities aim to nurture, Hope gives both Zurich Chamber Orchestra and New Century reasons to be (and pardon the pun) hopeful indeed.

From von Biber’s bombastic Battalia to the subtleties of a recent Andrew Norman piece, the NCCO played everything with grace and beauty.