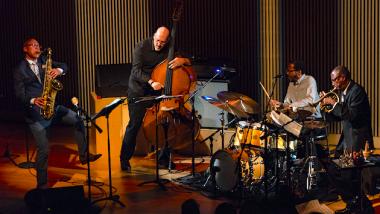 Please don’t take this the wrong way. I love piano players, but I’m so glad the pianists got a week off from SFJAZZ. For four nights Berkeley High’s vaunted jazz legacy filled the SFJAZZ Center, with Joshua Redman (class of ’86) leading the all-star quartet Still Dreaming in the Miner Auditorium while slide trumpeter Steven Bernstein (class of ’79) held forth in the Joe Henderson Lab with his protean quartet Sexmob Thursday and Friday (which expanded to the also piano-free Millennial Territory Orchestra West on Saturday and Sunday).

Josh Redman has spent much of the past decade playing brilliantly in pianoless trios, but in exploring Ornette’s bluesy, rough-and-tumble harmelodic universe he’s making some of his most arrestingly beautiful music. The band, which recently released an excellent eponymous album on Nonesuch, features three equally intrepid masters: cornetist Ron Miles, bassist Scott Colley and drummer Brian Blade. While Sexmob employs similarly pianoless instrumentation, the differences between the two bands on Thursday night were revealing. Humor isn’t absent from Still Dreaming’s music, but the dominant mood is earnest and interrogatory with laugh-inducing surprises flowing from the interwoven conversations between the axes of Blade/Colley and Redman/Miles.

I caught about half of their riveting set, which included a searing version of Redman’s beseeching “The Deserving Many” and a rollercoaster ride through Cherry’s “Mopti” that started with a long, incantatory solo saxophone passage and built with a cascading crescendo powered by Colley’s arco bass drone. Dewey Redman’s “Walls-Bridges” from the 1973 album The Ear of the Behearer (Impulse!) opened up the band’s textural range, with Redman’s gurgling tenor rubbing up against Miles’s plunger mute growls.

With Sexmob’s second show of the evening starting downstairs in the lab, I ducked out to catch the pianoless quartet focusing on music from the 2013 album — Cinema, Circus and Spaghetti: Sexmob Plays Fellini, the Music of Nino Rota (Royal Potato Family). Playing his trademark slide trumpet, a hybrid instrument that was a forgotten curiosity before he seized it as an ideal vehicle for his bravura improvisational flights, Bernstein led the band through a raucous, hilarious, sentimental, and often sublime show as brimming with unforgettable characterizations as a great Fellini film.

An extended medley of pieces from Fellini’s Amarcord segued into John Berry’s immortal James Bond theme “Goldfinger” (harkening back to the band’s 2001 album Sexmob plays Bond). It evoked a tantalizing image of Marcello Mastroianni as 007. That’s the thing about Sexmob, Bernstein likes to leave the seams of his music visible, and after more than 20 years playing together, the band can turn on a dime — or make the dime disappear before your eyes.

On either electric bass or double bass, Tony Scherr is as effective taking the lead on a theme as he is at providing a wicked groove. Briggan Krauss’s buzzy tone on alto sax is as redolent of circuses and gutbucket blues as Bernstein’s slide trumpet blasts. And Kenny Wollesen is one of jazz’s great texturalists, an orchestral percussionist who can make a cowbell sing or an electronic drum pad shimmy.

Conducting the band, Bernstein kept after Wollesen to get just the cadence he was looking for, coaxing him to get a bigger clank from the cowbell or a softer thunk from wooden marimba bars. As the Sexmob closed the set with a theme from La Dolce Vita, Bernstein insisted the band not pull out the sheet music. As the bittersweet theme filled the room, traffic raced by on Fell Street and the beret-clad Thelonious Monk looked up from the piano over his right shoulder in an image captured 70 years ago at Minton’s Playhouse by William Gottlieb, whose photos fill the windows of the S.F. Unified School District building across the street. Everything felt heightened and absurd, beautiful and transient, like a Fellini film with a Nino Rota score.

The exuberant ensemble revels in risk with their freewheeling 17-way musical conversation.