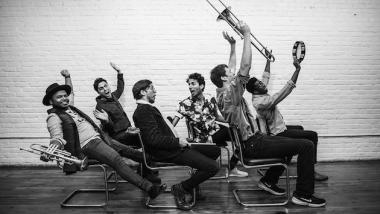 The Many Faces of Summer Fest

San José Jazz’s Summer Fest is a sun-drenched street party and a wee-hours, jazz-joint hang. It’s a salsa dance celebration and a gospel music congregation, an informal al fresco blues gig on a shaded lawn and a solo piano recital in a world-class theater. Unfolding on 14 stages on and around the Plaza de César E. Chávez Aug. 9–11, the 30th-annual Summer Fest contained so many overlapping musical worlds it was impossible to take in more than a sliver over the course of the weekend.

There was no shortage of indelible musical moments, but with enhanced security and fewer Plaza entry points in response to the recent mass shootings, moving between stages often took more time than in the past. Many artists referred specifically or indirectly to the attacks in El Paso, Dayton, and nearby Gilroy, dedicating pieces to those touched by the violence while offering their music as a balm.

I arrived on the Plaza early Saturday afternoon and quickly got into the spirit at the outdoors Blues/Big Easy Stage with drummer Sammy Miller and the Congregation, a seven-piece Americana jazz combo with a rollicking sound marked by call-and-response choruses, New Orleans beats, and playful, even antic songs. Combining the ridiculous and sublime, trombonist Sam Crittenden wandered out into the audience wearing a blonde wig with braids as a fair maiden in distress, while playing a singing solo with a tone as thick and warm as the great Ellingtonian, Quentin “Butter” Jackson.

On the Heritage Bank Café Stritch Stage, San José-reared New York drummer Sylvia Cuenca led a tough quartet with a winning combination of power and finesse. While these musicians had never played together in this configuration, their fluency in the post-bop idiom made it a free-flowing conversation between Sacramento pianist Joe Gilman, veteran alto saxophonist Jon Gordon, and Cuenca’s regular rhythm section mate bassist Essiet Essiet, a latter-day member of Art Blakey’s Jazz Messengers. On Cedar Walton’s standard “Firm Roots,” Gordon’s jaw-dropping speed and lithe, sinewy tone made a powerful impression, but most striking was Gilman’s fluid lyricism, a sound too little heard in the Bay Area since he moved to the state capital.

If the afternoon had a spiritual center, it was North Bay tenor saxophonist Richard Howell’s overwhelming performance of John Coltrane’s masterpiece A Love Supreme on the Adobe Silicone Valley Stage, a conference room in the Fairmont Hotel. The business-like setting didn’t keep Howell from soaring. Performing with a stellar young band featuring his son Elé Howell on drums, bassist Nick Panoutsos, and pianist Ian McArdle, the saxophonist moved through Trane’s four worshipful stations, reaching ecstatic heights on “Pursuance” and swirling, stunned acceptance of grace on the concluding “Psalm.” The standing-room-only audience responded in kind, and around the festival for the rest of the weekend it was the performance I heard talked about most. A veteran master who usually produces his own shows, Howell is way overdue for some serious attention from other presenters. Monterey, SFJAZZ, Stanford: It’s time to get on the Howell train.

Having following Howell for decades, I wasn’t surprised by his ability to seize the moment, but I was pleasantly delighted to stumble onto Las Chollas Pelligrosas on the small outdoors Sonido Clash Stage. An all-female acoustic sextet from Phoenix, the group draws on an array of Latin American musical traditions with a particular focus on Mexico. With all the women contributing vocal harmonies and at least two strong lead singers, Las Chollas delivered a set that was playfully dramatic, heartfelt, and utterly assured, cresting with a rousing version of Manu Chao’s anthem, “Clandestina.”

Looking for a break from the heat I headed over to the Hammer Theatre for a solo set by pianist Fred Hersch, a format in which he’s one of jazz’s unsurpassed masters. His recitals tend to flow with an internal logic guided by related or contrasting shades of beauty, as when he followed a stately version of Billy Strayhorn’s classic “U.M.M.G.” with an exquisite, close reading of Jimmy Webb’s “Wichita Lineman.” An improviser and composer with a sumptuous sense of balance and form, Hersch often delivers tunes in twined medleys, a device that worked particularly well pairing his early career original “Sarabande” with Cole Porter’s “From This Moment On.”

Back at the Fairmont, Howell’s Coltrane spell seemed to endure as I entered with Kim Nalley in midflight on “My Favorite Things.” The commanding San Francisco jazz vocalist had an ideal foil in the loquacious saxophonist James Carter. Accompanied by pianist Tammy Hall, bassist Michael Zisman, and drummer Kent Bryson, her redoubtable working band, Nalley is a force of nature under normal circumstances. With his vast palette of old-school techniques — slap tonguing, circular breathing, and altissimo squeals — Carter possess a left-field challenge.

A horn player joining a vocalist as a special guest usually picks his or her spots, adding carefully edited commentary when space clearly presents itself. But no one has ever accused Carter of subtlty. On an arrangement of “My Man” that opened with slow-drag anguish and then suddenly turned into a Havana party, he maintained a steady flow of tenor-sax commentary with Nalley as she was singing. And on a gospel-powered version of The Jeffersons theme “Moving on Up” his soprano sax swooped and intersected with her lines, alternating as a chorus and second lead voice. A less confident or equipped singer might quail under Carter’s flourishes, but Nalley seemed to revel in the interactions, absorbing his energy without ceding her space.

Café Stritch, one of the Bay Area’s leading jazz spots year-round, serves as something of the unofficial Summer Fest headquarters. It was the perfect spot for San José native Jackie Gage, back in town from the New York area where she’s been building her career in recent years. Accompanied by fellow San Joséan Dillon Vado on drums, bassist Aaron Germain, and the impressive young New York pianist Julius Rodriguez, she presented a well-conceived tribute to Nancy Wilson, opening with the Wilsonian signature “Guess Who I Saw Today?” that fully honored the song’s narrative arc and gut-punchline.

Part of what made Wilson such a potent and memorable song stylist was her acerbic edge. Ernest instead of acidic, Gage is a pearlescent, cool-toned singer who swings deeply but lightly. She was particularly effective on the besotted standards like “Teach Me Tonight” and a piano/vocal duo on Henry Mancini’s “Theme from Hotel,” a song that should be far better known).

She took over the piano herself for an aching version of the Bonnie Raitt hit “I Can’t Make You Love Me,” but the set’s most moving song was an original work-in-progress that she performed solo, accompanying herself on guitar. She dedicated the plea for love and connection to those touched by the recent shootings (while noting that some of the Summer Fest venders had last worked at the Garlic Festival).

Gage’s openhearted persona doesn’t always work with her material. She’ll need to hone an imperious tone to put the requisite snap in Dave Frishberg’s celebration of divahood, “Peel Me a Grape.” Which isn’t to say that she’s soft. For an encore, Gage invited Kim Nalley and saxophonist Oscar Pangilinan on stage (where they were eventually joined by James Carter, who came up to after protesting the lack of an invitation). In the movie Frozen, Olaf sings “The hot and the cold are both so intense/Put ’em together it just makes sense!” The magical snowman might be clueless about the physics of water, but in jazz he’s got a point. Bringing together contrasting temperaments can create riveting reactions. With Nalley and Carter’s high-octane delivery pushing against Gage and Pangilinan’s unflappable cool, it was a moment for the ages.

Thankfully the room was still standing when they finished, which meant that drummer Wally Schnalle’s power trio Idiot Fish played a late night Stritch set that started past midnight. Featuring electric bassist Dan Robbins and guitarist Hristo Vitchev, the trio was joined by bassoon master and creative wild card Paul Hanson. Schnalle writes angular, intricately constructed, metrically shifting tunes that can bring to mind the music of the Brecker Brothers.  It’s a kind of fast, exhilarating, and smart jazz/rock fusion that is rarely heard these days, and Schnalle’s band makes a convincing case for that being an unfortunate development. With various effects, Hanson’s bassoon can sound like a Stratocaster or a keyboard, and his unison lines with Vitchev were often astounding. Staggering back to my room after 1 a.m. I felt both sonically sated and disappointed at not catching at least a half- dozen other acts I’d circled on my program.

Nobody goes to Car Six anymore — too crowded.

The annual festival is a load of fun, despite persistent over-amplification.