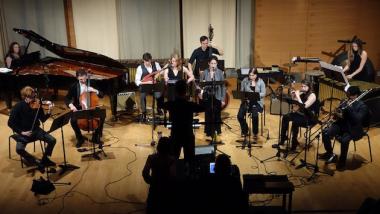 It can be difficult to keep track of the various small ensembles in the Bay Area. There’s a trickle-down effect that makes it all possible: the major musical institutions are the day jobs for the musicians who then moonlight in bands like the one whose concert I attended on Saturday night in Osher Salon at the SF Conservatory of Music: Ninth Planet New Music, which is the brand-new name for the merged entities of Wild Rumpus (founded in 2011) and the composers collective named Composers, Inc. (founded in 1984).

In a way, the story here is just the persistence and dedication of the performers in the main ensemble: Giacomo Fiore (guitar), Margaret Halbig (piano), Sophie Huet (bass clarinet), Brendan Lai-Tong (trombone), Mckenzie Langefeld (percussion), Jessie Nucho (flutes), and Eugene Theriault (double bass). They rehearsed the music for four days, according to composer and board member Ursula Kwong-Brown. That’s a lot of effort for a concert that was heard by about 50 people. But the passionate performances that resulted showed the music off to best advantage.

The concert was billed as a walk down memory lane, with pieces originally composed for the two now-merged groups and a premiere by Kwong-Brown. It was anchored by Jenny Olivia Johnson’s Reflect Reflect Respond Respond (Echo and Narcissus in Reverse), a 20-minute cantata sung here by experienced new-music sopranos Amy Foote and Ann Moss, with the ensemble boosted by Evan Kahn (cello) and Kevin Rogers (violin).

Johnson, who presently teaches at Wellesley College, is obviously a natively dramatic composer: Reflect Reflect begins with a forceful, full-ensemble outcry that includes repeated bass drum hits, trombone pedal notes, and a flurry of highly charged melodic gestures. The doubled voice of Echo enters with anguished cries, but many of these gestures recur in more subdued form as the piece moves into a kind of litany of grief. Of course, Johnson includes digital delay effects to create the voice of Echo, but the two sopranos were an even more powerful representation of inconsolable sorrow mixed with occasional remembrances of Narcissus’s yearning for his own reflection (as echoed by the nymph). In the last section, the composer adds the chorale “Jesu, meine Freude,” which overlaps in ripples with some of the previous music. It’s beautiful, even calming, as the voices fade away. Reflect Reflect is the kind of score that you hope you’ll experience when you sit down at a concert of music you don’t know. Nathaniel Berman, current artistic director of Ninth Planet, conducted a fluid, emotive performance.

Two pieces by Eve Beglarian were chosen to complement Johnson’s work. Play Like a Girl is an open-form set of variations on a Bulgarian folksong. Margaret Halbig gave it a joyous, high-spirited performance, choosing to perform it with prerecorded tracks that double up the variations. Until It Blazes is another solo work, here played by guitarist and SFCV contributor Giacomo Fiore. The player sets up recurring patterns on a digital delay and then slowly, in real time, varies the accented notes so that new melodic ideas appear. (The connection with Johnson’s formal process, which Berman alerted the audience to, was clear in retrospect.)

On the first half we heard Dan VanHassel’s Balance of Power, a composition based around a drone, with spiky, rock-like rhythms played off against a slow chord progression. It was a lot of fun. Jessie Nucho, Evan Kahn, and Halbig gave a well-balanced performance of Kaija Saariaho’s Cendres (Cinders, 1998, a work, like Beglarian’s, that was not composed for either Bay Area group). And the ensemble gave an excellent account of Unwinding III, the premiere by Ursula Kwong-Brown. It’s a piece about the release of physical tension and the upwelling of relief and energy that comes with it. The piano arabesque that begins the piece and centers it merges with ecstatic melodic surges that put one in mind of Ravel.

Ninth Planet printed a program with 11 pages of useful notes and introduction, not counting the (minimal) introductions from the stage. If sweating the details translated into audience, these folks would be playing the Shoreline Amphitheater.

The composer joins forces with students and faculty from CalArts.

Sutro Baths and the sea are the backdrop for a site-specific piece about water and life.