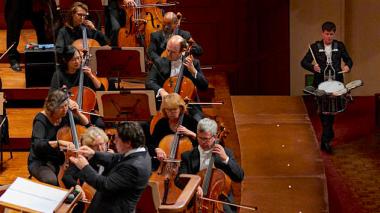 I was skeptical as Adam Schoenberg stood on stage at Davies Symphony Hall and explained the symbolism of his percussion concerto Losing Earth. Musical representations of extramusical ideas often fall short by exchanging interesting sounds for painfully allegorical ones. This compromise provides neither a satisfying musical experience nor a compelling reflection of the composer’s chosen subject matter. Indeed, I rolled my eyes as Schoenberg described the daily grind of civilization depicted by a march, natural disasters by rhythmic disruptions, and sea level rise by a slow, watery vibrato.

The sentence that shook me from my haughty incredulity was Schoenberg’s description of the finale: “This movement is a call to action. A call to come together and stop this climate crisis, if indeed it’s still possible to stop it.”

Surely there were many in attendance who were similarly shaken, many who, like Schoenberg, are terrified of burdening their children with a dying planet. But as I looked around the hall, I wondered how many held stock in companies that lobbied against environmental legislation, how many were on the boards of those companies, or owned those companies, or did the lobbying themselves. I wondered how many vote for the politicians who are financially rewarded, directly or indirectly, by blocking action on climate change.

Here was a frequently performed composer standing in front of a major orchestra risking his reputation, and perhaps even endangering future major commissions, by voicing his fear and speaking truth. Classical music isn’t going to save the world; but if Schoenberg’s generation can make it unacceptable for those in the classical-music community to profit from the destruction of our planet, perhaps other institutions can do the same.

Losing Earth was commissioned by the San Francisco Symphony for their principal percussionist Jacob Nissly. He and the composer are close friends, and Schoenberg’s introductory remarks indicated that his compositional process included extensive collaboration with Nissly.

The result is a score tailored to this virtuoso’s strengths, and one that pays homage to his background. The opening march is not just a symbol of relentless forward motion, but a reference to Nissly’s youth in marching bands. Schoenberg makes the reference literal by asking the soloist to enter the hall from the back, a visibly heavy collection of drums hanging from his shoulders as he whacks his way toward the stage.

The opening march gives way to an extended reverie for vibraphone and gongs, which represent the slowly-encroaching ocean. Whispery textures in the strings and brass support Nissly’s delicate ringing and chiming. This movement, and especially the transition to the finale, contain the concerto’s finest scoring. Soloist and orchestra each have defined sonic roles, and yet their timbres combine to form a shimmering texture that swelled enchantingly through Davies Hall.

The closing movement is the most energetic, expressing both alarm and optimism. The former is provided by scoring that at times sounds literally like alarm bells, a wake-up call that our Earth is in peril. The latter takes the form of what the composer calls a “pop-oriented chord progression and groove.”

The final gesture is memorable: Nissly and several other percussionists, positioned on balconies around the hall, each pick up a Roto Sound cymbal, an instrument that suspends a single crotale-like brass disc in a stick frame that allows the cymbal to rotate freely in two axes. All in unison, the percussionists strike their cymbals and then give them a vigorous spin. The undulating effect is magnificent. Interestingly, Gérard Grisey’s Le Noir de l'Etoile (The black of the star) from 1990 ends exactly the same way. No complaints about that, though. It’s a good ending and deserves to be recontextualized.

Schoenberg’s score is not without weaknesses. While the third movement accomplishes its role of a galvanizing anthem, many of the scalar passages which wind their way through the repeating chords are underworked. A pop anthem doesn’t have to be unpolished, and Schoenberg missed an opportunity here to weave in some finer counterpoint.

Some of the louder moments are truly stunning — several bass drums positioned around the auditorium, for instance — but others are loud without being impactful. The finale’s climax lacked a resonant foundation in the orchestra which would have made the volume thrilling rather than painful.

Finally, I was left wanting to hear even more of Nissly’s technique. Schoenberg built up our expectations with his description of the concerto’s ending, in which the soloist was to “rock out” (the composer’s words). Impressive though his playing was, Nissly wasn’t given the chance to truly soar the heights of virtuosity.

Also included on the evening’s program was the too-rarely heard Lili Boulanger, whose D’un matin de printemps (Of a spring morning) is short but supremely well-wrought, the equal of any Debussy or Ravel. Most of the second half consisted of Mussorgky’s Pictures at an Exhibition, the inclusion of which may be a sly reference to another Adam Schoenberg work. 2012’s Picture Studies is a contemporary reimagining of Mussorgsky’s idea, and earned the composer a Grammy nomination. Conductor Cristian Măcelaru and the San Francisco Symphony gave us a fine rendering of Mussorgky’s Pictures. The mournful troubadour song in “Il vecchio castello,” the creaking ox cart in “Bydlo,” and the ancient airlessness of the “Catacombae” all came brilliantly to life.