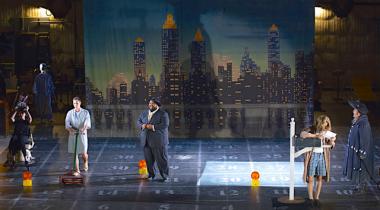 “And now on with the opera,” Groucho Marx proclaims! “Let joy be unconfined. Let there be dancing in the streets, drinking in the saloons and necking in the parlor.” And a moment later mayhem reigns supreme in the Marx Brothers’ classic 1935 comedy of errors, A Night at the Opera — there’s baseball in the pit and Il trovatore on the stage. But what a stage!

As the “Anvil Chorus” clangs and the romantic tenor belts “Di quella pira,” Harpo Marx flies through the air with the greatest of ease causing backdrops to rise and fall until the hapless tenor is singing in front of vegetable push cart, a streetcar stop, and the deck of a battleship.

Tuesday, 83 years after A Night at the Opera was filmed on the Culver City lot of Metro Goldwyn Mayer (now Sony Studios), director Yuval Sharon and conductor Marc Lowenstein, 19 singing members of their opera company, The Industry, six dancers, and 28 musicians from the Los Angeles Philharmonic took over soundstage No. 23 on the very same lot to present their version of Europeras 1 & 2 by John Cage.

Produced in collaboration with the Getty Museum, the show is the first part of a season-long exploration of the post-Dada, modern arts movement of the late 1950s, known as Fluxus, once described as a fusion of Spike Jones and Marcel Duchamp. It was a movement that celebrated the concept of “anti-art,” and its guru and theoretician was John Cage.

A champion of random juxtapositions and the notion that all sounds are created equal, Cage created his two Europeras as a crash course (literally) in the European opera tradition. They were premiered in December 1987 at the Frankfurt Opera.

The large cast of singers perform (often simultaneously) bits and pieces of arias from 50 operas ranging from Monteverdi’s Orfeo to Alban Berg’s Lulu. At the same time, but with no particular effort at coordination, the musicians create an operatic smorgasbord drawn from 63 different scores. There is no conductor, only strategically placed clocks, which dictate the arias and the bracketed section of the score that is to be performed. No two performances are ever exactly alike.

As in A Night at the Opera, the singers performed as an endless array of backdrops rose and fell: pastoral forests, Egyptian temples, a French palace, New York skyscrapers, a palm tree island, snowy mountaintops. It was a perfect visualization of Cage’s creation.

The number of incongruously colliding scenes, movie references, crazy props, and operatic characters (as directed by Sharon), are beyond remembering, as are the myriad costumes accumulated by Emma Kingsbury, and the scene changes designed by John Iacovelli. There’s the singing nun carrying a surfboard, Rudolf Valentino from The Sheik, The Bride of Frankenstein, and “Little Alex” the Droog from A Clockwork Orange. But, most appropriately, there’s Harpo Marx.

The singers (who are forced to perform all their different arias at the same time, with hardly any orchestral pitch to latch on to), ventured boldly into Cage’s musical circus, snippet by snippet, changing costumes and characters as they went while the members of the Philharmonic made the most of every semiquaver.

The one concession to election night was a map of the U.S. that rolled onstage and was filled in with red and blue pens. If you tried to analyze the performance or struggled to make sense of it, you were doomed to failure and frustration. The only way to appreciate the constant barrage of disconnected music and visual imagery was to surrender to it and smile.

How composer John Cage helped the author choose a career, enter the world of music beyond conservatory walls, and even identify mushrooms.