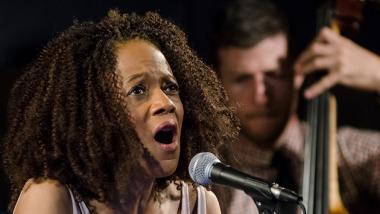 It’s easy enough to enjoy a Paula West performance for the simple pleasures proffered by her luxuriant contralto and supple sense of swing. But there’s a whole other level to West’s music, a meta commentary on the material she interpreting that often adds a layer of enjoyment for the song connoisseurs in her audience. The San Francisco singer’s sold-out Saturday show at Feinstein’s at the Hotel Nikko, where she returns for a second weekend run Feb. 13–16, featured a particularly diverse and rich assortment of tunes ranging across the 20th century, and West was at her most subtle as she gamboled through the lyrical thickets.

Part of what keeps West’s music fresh and startlingly revelatory is that she surrounds herself with superlative musicians. Her band is a mix of new and familiar players. For several years her ensemble has pivoted on guitarist Ed Cherry, a veteran New York player whose resume includes a 13-year stint with Dizzy Gillespie. He’s still an essential component of her sound, but at Saturday’s show the action centered on drummer Jerome Jennings, a polished and thoughtful accompanist who constantly found creative and unobtrusive ways to provide the music with the requisite bounce.

Doug Stuart, who’s as comfortable playing sleek, futuristic Afropop with Bells Atlas as laying down a walking bass line with West, was a new face in the mix, and he played with power and precision. The revelation was New Jersey pianist Dean Schneider, a top-shelf accompanist who spent two decades working with Diahann Carroll. He didn’t take many solos, but his bright harmonies and rhythmically assured phrasing made a vivid impression.

After opening with a sleekly reharmonized version of “Summertime,” the quartet brought West out with Hadda Brooks’s rollicking “Any Time, Any Place, Anywhere,” a tune that feels like one of those rowdy songs of welcome, like “I Love Being Here With You.” Actually, it’s considerably darker, a cheating I-told-you-so that West delivers more in triumph than sorrow.

Dipping into her historical files, she offered the 1920s obscurity “I’m a Little Blackbird Looking for a Bluebird,” a song introduced by Florence Mills in 1924 (though its best known to jazz lovers for the classic 1924 recording by Clarence Williams’s Blue Five pairing soprano saxophone great Sidney Bechet and cornetist Louis Armstrong, who had yet to reshape jazz in his ebullient image). West’s arrangement maintains the loping rhythmic feel of the 1920s, a striking counterpoint to her lack of vintage affect.

Undaunted by the prospect of melodrama, West plunged into the telenovela-sized recriminations of “Perfidia,” a Latin American standard by Mexican songwriter Alberto Domínguez (with an English lyric by Milton Leeds). Turning from pathos to absurdity, she delivered the first of three Cole Porter numbers with “Nobody’s Chasing Me,” an exemplar of two underappreciated popular song tropes. It’s both a great list song with a zoological bent, a genre that Mr. “Bees Do It” defined, and a romantic woe-is-me that gets funnier with each verse, especially with West playing it straight throughout.

Set to a percolating second line groove, her jaunt through Hank Williams’s “Jambalaya” offered another glimpse at her ability to transmute any genre into good, clean jazz, while Porter’s sizzling “You’ve Got That Thing” provided a troubling reminder that the psychology behind “game” is hardly new. The meeting-and-mating advice for men on the prowl suggests opening with a few “negs” to lower a woman’s confidence. With a verse that includes three or four choice putdowns (“You’re fetching physique is hardly unique, you’re mentally not so hot; you’ll never win laurels because of your morals, but I’ll tell you what you’ve got”), West reminds us that Porter was an all-too-keen sideline observer of the war of the sexes.

Mastering Porter’s double-entendres is par for the jazz vocalist course, but no artist has been more effective in translating Bob Dylan’s songs into the jazz idiom than West. Her rendition of “Mr. Tambourine Man” continues to evolve, as her expert behind-the-beat phrasing unclots his tangled lyrical skein. Digging into the film-noir feel of “Angel Eyes,” West revealed the thick stream of torment and self-pity running through the song, leaving little wonder why the narrator got ditched.

For sheer melodic beauty, West leaned into “In the Wee Small Hours,” wisely following the Sinatra blueprint, and for an encore she returned to Dylan with “Like a Rolling Stone.” It’s a thrilling arrangement that sustains drama with a frictionless groove and shifting accompaniment that leaves her voice exposed so she can dial down the dynamic rather than belt. Backed only by Cherry’s softly strummed chords on the line “no direction home,” West dissects Dylan’s devastating portrait with a scalpel. In addition to Feinstein’s, West also performs for the Sonoma Valley Jazz Society on March 1 at Sonoma Vintage House.

The beloved singer is all about the music and the festival welcomes her to its all-star roster.

The jazz chanteuse has upcoming gigs with the SF and Oakland Symphonies. She talks about her passions and influences.