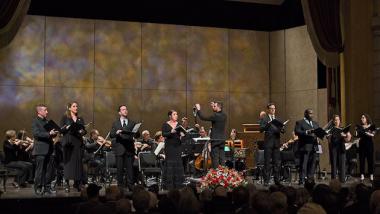 Renovating the traditional winter holiday concert is possibly the most underappreciated test of invention and musical skill for music directors. You have to get the novelty/old-favorite ratio just right. Philharmonia Baroque took on this task last weekend following the lead of Patrick Dupré Quigley, founder of South Florida’s early music band Seraphic Fire. A raft of fine vocalists, particularly countertenor Reginald Mobley, made Saturday evening’s concert in Berkeley’s First Congregational Church special, while the orchestra handled a wide range of music with the sprezzatura that it usually displays.

Quigley built the concert around two of J.S. Bach’s cantatas for Advent (the Christian season of spiritual preparation for the Christmas feast): Nun komm der Heiden Heiland (Now come, savior of the heathens), written at Weimar in 1714, and the festive, brilliant Wachet auf, ruft uns die Stimme (Awake, the voice calls to us) written for Leipzig in 1731. Wachet auf might have been the highlight of the concert, except that Mobley had other ideas.

Quigley has some similar qualities to Nicholas McGegan on the podium. He’s given to a few, broad, communicative gestures, leaning in to some phrases to elicit more oomph from the orchestra. He’s also a good advocate of Baroque music for an audience. To put Vivaldi in a (much) larger context, he chose a piece from Claudio Monteverdi’s 1641 publication Selva morale e spirituale (Moral and spiritual forest). The setting of Psalm 111, Confitebor tibi Domine (I will praise you Lord with my whole heart), SV 266, is a finely balanced, dramatic account of the words, blending the new style monody with more conventional (but gorgeous) choral singing.

Quigley, however, pushed an up-tempo version that foregrounded the guitar playing of John Lenti to a distracting degree. If you like a little mariachi with your Monteverdi, it was exciting, but it marred the balance with the reduced string section and the rest of the continuo. The singing of soprano Margot Rood, tenor Steven Soph, and baritone Steven Eddy was excellent throughout.

Margot Rood also shone as Cupid in the “Frost Scene” from Henry Purcell’s King Arthur, playing against Eddy as the Cold Genius. Rood can do the vibrato-less, pure-toned voice when needed, as she showed in the Bach chorales and parts of the Monteverdi. But here, she warmed up her voice, bringing a sarcastic, flirtatious bite to her recitative and a tight vibrato and warmth to her song and duet. Eddy made a believable transition throughout the scene, abetted by Philharmonia Chorale members Tonia d’Amelio, Barbara Rowland, Jacque Wilson, and Corey Head, who filled out the scene.

The orchestra was on firm ground with all of these pieces, showing their experience and finely balanced ensemble. The Bach cantatas triumphed, the familiar glories of the magisterial, gallant Wachet auf no less welcome than a good performance of Messiah. The small helping of adventure had, it turned out, only whetted our appetites for Bach’s masterpiece.

Reginald Mobley Sings of War and Peace With Agave Baroque

A concert of music from the dark time of the Thirty Years’ War.