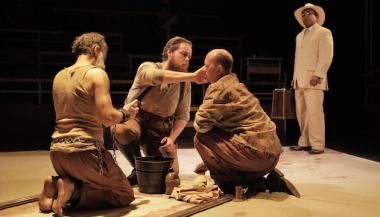 In the Penal Colony, based on Steven Berkoff’s play adapted from Franz Kafka’s 1914 short story, describes a neutral official visitor’s observation of preparations for the execution, by a uniquely cruel torture machine, of a prisoner who had failed at his guard post. The entire 80-minute opera is set for only tenor, baritone, two mute actors, and string quintet and it proceeds unerringly and devastatingly.

Portland Opera produced it in the round: audience surrounding the unit set on four sides, perhaps eight rows to the side, the strings tucked into one of the four diagonal aisles. Jerry Mouad beautifully suggested the bleak setting, the infernal machine — which kills, over 12 hours, by carving the prisoner’s offense into his skin.

Tenor Martin Bakari was clear, calm, objective, and in beautiful voice as The Visitor; baritone Ryan Thorn grew steadily and deeply into the role of the Officer. Kafka’s story is ultimately, I think, a denunciation of faith and authority as controllers of human society; the machine symbolizes the inadequacy of their reliance on technology, indeed of instrumentality. Thorn expressed all this with pathos and beauty, and Bakari’s witnessing was equally poignant.

Nicholas Fox conducted with supple support. Glass’s music is still controversial after all these years: the string quartet energizes the score with repeated rhythmic action, often on sustained harmonies, occasionally shifting subtly to guide the dramatic argument. The vocal cantilena floats over this, generally following Kafka’s text, very clearly set and expressed in this production, almost not needing the effectively displayed supertitles.

The bad taste, but not perhaps one of the sources, of the Glass-Kafka contemplation was overcome, next night, by the adolescent Mozart’s marvelous view of Rationalist (European) attitudes toward love, class, and the war between the sexes. The Baroque symmetries of French classicism collide with commedia dell’arte; the mannered control of fashion and etiquette tangle with animal human drives. As I’ve written elsewhere, the opera is preoccupied with madness. Insanity, both feigned and temporarily real, permeates many arias and ensembles; it’s remarked on by the characters; it’s even reflected in some of Mozart’s orchestration. (Haydn had treated the subject similarly the year before, in incidental music to the play Il Distratto.)

The complex plot essentially rests on Count Belfiore, who has nearly murdered his beloved Violante in a fit of rage, driving her into disguise as a “feigned gardener.” Now, though, he has arranged to marry Arminda, the niece of the Podestà (mayor).

In a parallel plot, Violante’s manservant, also disguised as a gardener, Nardo (these names have extended resonance we can’t go into here), lusts for the Podestà’s servant, Serpetta, who in turn has eyes on her boss. And behind all this, a seventh figure, Ramiro (Arminda’s rejected suitor, originally set on a castrato), comments on the follies and reversals of all this amatory business.

Mezzo-soprano Camille Sherman was affecting as this Ramiro, managing a balance of character and dramatic function with a clear, accurate voice and fine presence. Soprano Helen Zhibing Huang was the pert, clear-voiced Serpetta. As Arminda, soprano Antonia Tamer alternated convincingly between pathos and fury — Pamina and Queen of Night in one.

Baritone Geoffrey Schellenberg was an unusually thoughtful Nardo, transported with amour, perplexed at its difficulties. And tenor Thomas Ciluffo was wonderful as Belfiore, funny in his parade of national-type lovers, quick and pointed on his feet, vocally flexible, strong, pleasant, and accurate.

Tenor Mark Thomsen, while in good voice and effective as the Don Alfonso-like Podestà (for Così fan tutte keeps coming to mind), seemed hampered by too often being set at the center of the large stage; even his oversized Panama brim did not amplify his pleasant voice.

As Sandrina-Violante, the giardiniera, Lindsay Ohse rightly dominated the show. Physically supple and graceful, vocally bright yet modulated, her acting convincing and affecting, she took place well in ensembles, responding well in duet, emoting persuasively in a wide range. Her Act II mad scene with Ciluffo, — they become bestial Greek gods, bewildering the rest of the cast — was hilarious yet insane enough to be a little scary. Like many of the cast, she has coloratura, trill included, and beauty of tone.

In the Penal Colony was given in the black-box Hampton Opera Center, serviceable in a neutral style; La Finta giardiniera in the 870-seat Newmark Theatre, an intimate, rather luxurious downtown venue. Like the choice of repertory, production, and cast — and the thoughtful yet sumptuous program booklet — this reflects care and intelligence on the part of Portland Opera. It’s an impressive undertaking.

The music shines through in this bare-bones production of a lesser-known Glass opera.