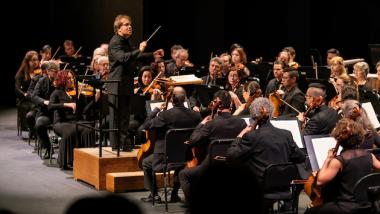 The Seattle Symphony Wades Into the Unfathomable Ocean

In Seattle — a city on the breathtaking Puget Sound that multiple tech giants call home — nature and innovation collide. It’s fitting, then, for the Seattle Symphony to work with John Luther Adams, a maverick of a composer who is deeply and enduringly inspired by the natural world. This weekend, Cal Performances brought both the Symphony and Adams to Berkeley to perform two different programs. Sunday’s included Adams’s award-winning Become Ocean, which the Symphony commissioned, as well as two other works that also pay tribute to the sea.

Another composer powerfully influenced by nature was the Finnish Jean Sibelius. He named The Oceanides after sea nymphs in Greek mythology. But his tone poem also depicts water itself. Even though the piece is only one movement, Sunday’s performance accentuated that — from calm to tempestuous, from tranquil to terrifying — the sea can be fickle indeed.

Comparably volatile is the inner world of the protagonist in Britten’s opera Peter Grimes. He is a pariah suspected by his fishing town of murdering an apprentice who definitely died under his tutelage. Britten constructed Four Sea Interludes from purely orchestral sections of his opera. He also published a fifth orchestral number from it, a Passacaglia, which was inserted on Sunday between the third and fourth interludes. The music does sometimes paint literal sounds of the sea — birds chirping, waves crashing, and so forth — but arguably everything also sounds like Grimes’s tormented soul.

In the first movement, “Dawn,” the ominous low brass hardly suggested the start of a happy, sunshiny day. The ensuing “Sunday Morning” brightened, but the bells brought to mind less a celebratory church service than a portentous judgment day. The solemn “Moonlight” set the stage for the Passacaglia, which was like a lament and a funeral march combined. A viola solo introduced the lament, under which a repeating theme in the low strings conjured the notion of inescapable (and tragic) fate. Finally, the audience applauded the brute force and technical precision of “Stormy Night,” the last of Britten’s Sea Interludes.

Grimes made his living at sea, and ultimately, he died there, too. For him, water was both the giver and taker of life. The title of Become Ocean comes from a line by John Cage, which suggests the same fate threatens to hold true for us all: “Life on this earth first emerged from the sea. As the polar ice melts and sea level rises, we humans find ourselves facing the prospect that once again we may quite literally become ocean.” But the title also encapsulates the experience of listening to this 40-minute, single-movement work. Just as the ocean has waves of water, this piece has mesmerizing waves of sound that invite listeners to become all-engrossed or fully absorbed.

Become Ocean is resolutely nonmelodic and nonteleological, and while it must have a formal structure, it feels deliberately amorphous. This piece foregrounds unpredictable evolution of tone colors and dynamics. Its shifts and swells are largely made of sustained chords in the winds that change over time, as well as relentless rhythmic patterns that fade in, out, and across various instruments.

Watching this piece unfold live was also bewildering. The orchestra was physically separated into three groups: strings, woodwinds, and brass, with percussion occupying a neutral territory in the middle of the stage. Each of the three groups was said to have its own tempo, but conductor Ludovic Morlot was conducting only one. And while he was obviously doing much more than beating time, the contrast between the simple bars I was seeing and the seemingly ametric, nonhierarchical music I was hearing perplexed. And especially in the pitched percussion and harps, the ostinati looked daunting.

Astonishing, incomprehensible, and strange, Become Ocean evokes the idea of the sublime. Cataclysmic climate change might evoke the same idea, albeit in terrifying rather than astounding ways. Considering only the rising sea levels to which this title alludes, for example, Seattle and its tech gods may be safely situated on high hills, but Bay-Area audiences and idols are not.

John Luther Adams Gets a Festival at SFJAZZ

The weeklong celebration of this uniquely American composer includes concerts, an audio installation, and a listening party.