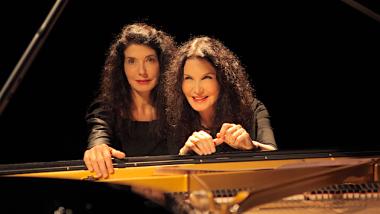 You don’t often come across a concert and performers so full of interesting interconnections and fascinating details as last Saturday’s set by the San Francisco Symphony, conducted by Semyon Bychkov and featuring Katia and Marielle Labèque, the illustrious French piano duo/sister act.

The concert itself was `a wonderful musical experience, but the wealth of historical and extra-musical trivia surrounding the program added an additional dimension.

The program included the San Francisco premieres of two pieces that are more than a century old: the Oresteia Overture by Russian composer Sergei Taneyev dates from 1889, and the Concerto for Two Pianos by Max Bruch from before 1916.

Katia and Marielle Labèque have been a piano duo for more than five decades; beginning more or less when their Italian mother started teaching them at ages 5 and 3, and certainly since their graduation from the Conservatoire de Paris in 1968. After all this time they more or less own the repertoire for two pianos, and they have commissioned numerous pieces to expand it.

It is amazing to see how similar the Labèque sisters look and behave on stage; from a distance they could even be mistaken for twins. But seated at their respective Steinways, nested together on Davies’ stage, they expressed themselves very differently — Katia more exuberant in her physical response than Marielle. And watching them being interviewed on French TV reveals two individuals whose artistic ambitions and musical instincts are perfectly matched.

Their engaging take on Bruch’s double concerto was the resounding proof of that unique synergy.

The piece itself has a troubled background story; it was commissioned from Max Bruch (1838–1920) by the American sisters and piano duo Rose and Ottilie Sutro (whose uncle Adolph built the Sutro Baths in San Francisco). In 1916, they premiered the concerto with Leopold Stokowski and the Philadelphia Orchestra, but, unbeknownst to the composer, the Sutro sisters had altered the score and simplified it to meet their musical skills; they never played the original version. Not until after the younger sister died in 1970, was Bruch’s concerto reconstructed from manuscripts in her estate.

The third movement, Adagio ma non troppo, is especially grand. With an uber-Romantic, sweeping motif in the piano, repeated in lush strings and sprinkled with piano arpeggios, it leads up to the majestic statement of the Finale: Andante - Allegro.

The Oresteia Overture was an equally big surprise, and arguably the high point of the evening. It definitely started the concert off with a bang.

Sergei Taneyev (1856–1915) wrote the piece with the intention to use it as the overture to his only opera, Oresteia, which premiered in 1895. Instead, it became a separate symphonic poem based on themes from the opera.

With his subtle but clear direction, Bychkov made an excellent case for Taneyev and this concert overture. Stylistically, the music hovers between Brahms, Wagner, Rimsky-Korsakov, and Tchaikovsky. It is repertoire that suits him.

As an accompanying conductor, he clearly had an exceptionally good rapport with the Labèque sisters, which makes even more sense when you find out that their lives are intertwined too, because he is married to the younger sibling, Marielle. Not that you would find such information anywhere in the program notes. In a way, this extramusical fact has nothing to do with the concert, but it still adds significance to the experience. And it certainly explained the warm hugs between conductor and soloists.

The choice of Tchaikovsky’s Symphony No. 2 was another sample of interesting musico-historical entanglement: Tchaikovsky and Taneyev started out as teacher and student, but they became close, life-long friends. Taneyev became the soloist of choice for every Russian premiere of a work for piano and orchestra, starting with Tchaikovsky’s Piano Concerto No. 1, and he followed in Tchaikovsky’s footsteps as a teacher at the Moscow Conservatory.

Entirely in line with the splendor of the rest of the program, Tchaikovsky’s symphony sounded profound and earnest.

Only one thing about Saturday’s performance was disappointing. For their encore, Katia and Marielle Labèque played the final movement from Philip Glass’s Four Movements for Two Pianos. Even these brilliant musicians could do nothing to soften my dislike of Glass’s piano music.

Anderson & Roe: Duo It All, With Heart

Duo-pianists Greg Anderson and Elizabeth Joy Roe gleefully pursue wide-ranging interests as they promote and perform classical music in its many guises.

The dynamic piano duo Anderson and Roe covers the classics, and brings new life to popular works of today from various genres.