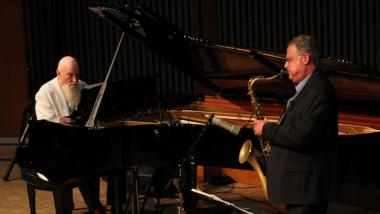 Terry Riley and George Brooks Offer You the World

On Sunday night, in the intimate Campbell Recital Hall at Stanford University, Terry Riley sat at the Steinway in a long, white suit coat, his shaved head accentuating his white beard that extended over most of his upper body, handwritten notes sitting on the music stand next to his iPad. He was improvising, as he has for the 79 years since he began making music. While he is well known in the American classical music world as one of the key composers of minimalist music, Riley was performing with saxophonist George Brooks (known for his Indian-jazz fusion) as part of the Stanford Jazz Festival.

Riley’s early history of learning music by ear end improvising continued during his formal composition studies at San Francisco State and were part of the aesthetic of minimalist works like In C and his improvisations at the KPFA studios in Berkeley, with other composer-improvisers like Pauline Oliveros, in the long ’60s. Perhaps less well-known are the influences of jazz and Hindustani classical artists on Riley. He has imbibed the work of Art Tatum, Bud Powell, Bill Evans, George Gershwin, Cole Porter, John Coltrane, and Wally Rose, and was a devoted student of Prandit Pran Nath. Brooks, also a student of Nath and a longtime musical partner with Riley, has been influential in the Bay Area blues scene as well.

All of these influences came out in the Sunday night set with Brooks: the American songbook, bebop, boogie-woogie, stride, and ragtime fused with ragas and Nath-inspired vocalizing while simultaneously drawing on Chopin’s Romantic harmonies and the pleasant meanderings of Debussy’s impressionistic melodies. These diverse sounds were all woven into the highly repetitive loops that linked Riley with minimalism. These influences usually operated simultaneously but once in a while the duo would offer a transcendent moment of pure, sublimely mechanical minimalism or seconds of what sounded like a jazz standard.

In Chasing Satie, an open-score improvisation in the spirit of and honoring the eponymous composer, it sounded at times as if the sensuously close intervals of the Gnoissiennes had grown up in a smoky jazz club of midcentury America. There were also the unmistakable glissandi slips of Hindustani classical music and vocalizing that conjured Pran Nath and elicited masterful, warmly full-throated exchanges with Brooks. All of this was set against a relentless left-hand ostinato that drove new altered states with its tempo changes. The performers were synced, with cues and expressive communiques as subtle as the joyous raise of an eyebrow, rapid-fire modulations, and climactic moments achieved as if they were playing one instrument. Once Riley was warmed up, his piano chops were undeniable: he held down complicated rhythmic patterns and tore up runs and passagework. Brooks, meanwhile, complemented his mellow, mid-register repetitions with wispy, smoke-like runs that never strained.

Riley’s singing fascinated me; it felt free and unconcerned. It brought an extra level of warmth to the pieces, like if Philip Glass started vocalizing over his piano Etudes. The second-to-last piece in the set started with Riley singing “This can’t be love because I feel so well.” His vocal timbre was something of the growliness of Louis Armstrong, the phrasing of Frank Sinatra, and the ornaments of Nath. Riley’s comfortability singing and his eclectic music interests made each piece interesting, even if some stood out to me as more pleasurable. Because there are so many sound worlds at play here, I can easily imagine a broader-than-usual distribution of audience opinion about any given piece on the set. Riley and Brooks’ connection with the music and each other radiated throughout the evening; they are kindred musical spirits. This gem of a concert, tucked away on Stanford’s campus, is just one of many over the next four weeks as part of the Stanford Jazz Festival.

Correction: As originally published, the paragraph above incorrectly quoted a line Terry Riley sang. It should be "This can't be love because I feel so well," from the Roger and Hart song "This Can't Be Love."