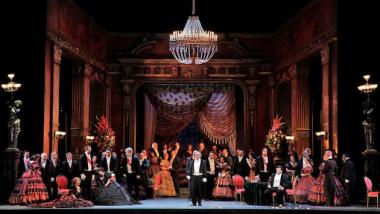 This Traviata Shows Its Age

The 1840s courtesan Marie Dupleiss was fortunate to count Alexandre Dumas, fils among her lovers. Though Marie died of consumption at 23, the ambitious young writer immortalized her in his hit novel The Lady of the Camellias. Countless adaptations have followed: a play starring Sarah Bernhardt, at least two dozen films, and a handful of ballets. The most enduring version of the story is Verdi’s 1853 opera La traviata, a staple of the standard operatic repertoire since its premiere.

La traviata’s popularity poses a challenge for directors and casts: A good Traviata must be uniquely worthwhile to fans with plenty of opportunities to see the opera. San Francisco Opera’s current Traviata is not. John Copley’s production first appeared here in 1987. This is its seventh outing in 30 years. Let’s hope it’s the last. Glitz and grandeur with no substance can be saved by great musical values, but those are also missing in this year’s revival. Performances of La traviata abound — you deserve a better one than this. It shouldn’t be hard to find.

If you go to the opera house to see your donation or ticket money onstage, you won’t be disappointed. John Conklin’s sets drip with glamour: impossibly high ceilings, brilliant chandeliers, shining marbles, and flirtatious Rococo paintings. Even when Violetta was dying in poverty in the final act, I would have killed for her apartment and furniture. David Walker’s costumes are equally glitzy. The ladies sweep about the stage in colorful, tiered gowns over 1860s elliptical hoops. Violetta’s white-with-silver-stars party dress in the first act recalls Greta Garbo’s gown in Camille. She dons its black twin for the second-act party, in a too-obvious reflection of her dampened spirits and impending death.

I have nothing against hoop skirts; in fact, I adore them! But on the opera stage, hoop skirts cannot be a substitute for saying something with your production, or for good acting. Both are missing here. There’s no point to this Traviata beyond the pretty. What little emotion it inspires is entirely thanks to Verdi’s music — the blocking is stiff, the gestures mannered, and the dramatic choices predictable. The few unexpected moments of the staging come at the expense of the drama, such as when amusing but unmannerly behavior at Flora’s party undercuts the impact of Alfredo’s insult.

The music matters above all in opera, and here, too, San Francisco Opera falls far short of its usually high standards. Aurelia Florian makes her United States debut as Violetta, a role she has sung worldwide but that seems badly suited to her voice. She has a pleasant instrument, with a rich, grainy sound, but she could not get through “Sempre libera.” Her descending runs fell flat, her top notes wavered, and some staccato entries were off-pitch. As her Alfredo, Atalla Ayan had better intonation but worse sound. His voice was always covered and not a single note was free and ringing. The result was uniformly bland. Only Artur Ruciński’s Giorgio Germont succeeded vocally. His warm baritone and extreme dynamic shaping of his lines kept his singing pleasant and engaging, despite mushy Italian diction.

What was happening in the pit sounded good, but it seemed to bear no relation to what was happening on the stage. Under the baton of Maestro Nicola Luisotti, the San Francisco Opera orchestra delivered a smooth, sensitive rendition of Verdi’s score. Luisotti’s interpretation was marked by extreme dynamic contrasts and steady forward momentum. Unfortunately, that momentum left the singers behind, with both the chorus and soloists frequently lagging. Without coordination, expressive choices seemed nonsensical. The three dramatic swells in volume during “Amami, Alfredo,” for instance, were gorgeous but entirely disconnected from Violetta’s musical entrances and emotions.

There’s a popular and deadly clichè that opera is both grandiose and boring. When the gowns glitter, the singing is substandard, and the drama is dead, it’s all too true.

The much-loved, much-seen show, with its opulent designs, opens the season with a lukewarm cast.