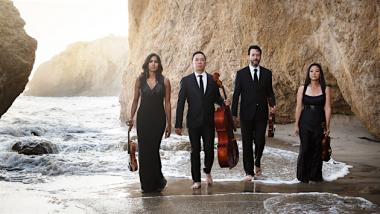 Variety Is the Spice of Hear Now's Musical Life

The Lyris Quartet is one of the finest and most adventurous ensembles in Los Angeles. The group is a mainstay of the Jacaranda music series, and Thursday its members, Alyssa Park and Shalini Vijayan violins, Luke Mauer, viola and Timothy Loo, cello, celebrated their eighth season as the resident string quartet of the Hear Now Music Festival.

From UCLA the festival fanned out citywide for three more concerts in Pasadena and Venice overall offering 26 works (many premieres) by composers closely linked to Los Angeles. And with that focus on LA, it’s not surprising the role of Hollywood films, television and media play in these composer’s resumes — none more so than Bruce Broughton.

Broughton’s film, television and awards credits include 24 Emmy nominations and 10 statuettes, along with an Academy Award nomination for his hell-bent-for-leather score for the 1985 western, Silverado.

Salmagundi is, in every way but title, a three-movement concerto for string quartet and orchestra. It received its world premiere in January in Thousand Oaks as a commission from the New West Symphony. It’s a work that is definitely worthy of finding a place in the contemporary concert repertoire. The parts writing and orchestration is finely crafted and detailed, the mood swings and instrumental interplay is richly atmospheric, with writing for the string quartet that is star-turn virtuosic.

To be a successful composer in Hollywood (unless you are Philip Glass) you have to be something of a chameleon in order to produce whatever the subject (and the director) require. Leonard Bernstein reportedly got into tempestuous arguments with Elia Kazan when the director of On the Waterfront would tell him he needed “18 seconds of passion.”

So it’s not surprising that Broughton’s music hints at numerous influences, from Schoenberg’s Verklärte Nacht (Transfigured night) to Samuel Barber’s Knoxville: Summer of 1915. But the references are evocative without ever feeling derivative or an act of mimicry. Broughton is an excellent orchestrator, adept at developing complex musical coloration, dynamic counterpoint and thematic development. Add the pinpoint power of the Lyris Quartet (which also brought the musicianship of the young orchestra players up a notch) and you had a winning musical formula. Hopefully the work will find future performances and gain the recognition it deserves. It also has the potential to become a showcase for the Lyris Quartet.

There was a certain level of Hollywood cinematic scope and propulsion to Benedikt Bryden’s 2016, Night Train. As its title suggests, it is a locomotive, momentum builder based on repeatedly driving patterns in the strings accented by resounding brass and clanging percussion. In his notes, Bryden cites the influence of Arthur Honegger’s Pacific 231 and John Adams’s Short Ride in a Fast Machine.

The concert’s mood and the texture took on a much darker complex tone in Peter Knell’s 2001 Lines/Angles, A.J. McCaffrey’s 2012 Thank You for Waiting, and Tjur (from 2003) by Jeffry Holmes. With all of the pieces fully orchestrated, this was a lot to ask of the young musicians that somehow managed to fill every inch of the Schoenberg’s stage.

Knell’s composition created a sustained, decidedly ominous Get Out! atmosphere of impending dread, as its dark string sonorities descended into the lower depths.

I’m not sure how thankful the young musicians were by the time they got to Thank You for Waiting. Even fresh fingers would have found the challenging densities of McCaffrey’s writing with its polyrhythmic shifts a challenge. I don’t think all those microtonal intonation slurs in the strings were actually in the score.

The players returned from intermission to perform Tjur (Swedish for “bull”) a piece meant to evoke mythic figures battling giant bulls in a frigid interstellar environment. The pieces complicated structural vocabulary (according to the composer’s notes) is built upon, “non-octavating scales; symmetrical chord structures; several types of microtanalities; and a variety of manipulations of one rhythmic meta-tala.”

It wasn’t surprising that the first concert of the eighth annual Hear Now Music Festival reflected the influence of Hollywood, since so many Los Angeles composers are (or wish to be) directly linked to the entertainment industry.

What was surprising about Saturday’s concert at the First Lutheran Church of Venice was the degree to which the musical sphere of influence shifted away from Hollywood and looked toward the meticulously structured and dissonant vocabulary of late 20th-century modernism — think Elliot Carter, Pierre Boulez, and Karlheinz Stockhausen.

Another significant difference was the level of the musicianship. While the opening concert showcased the youthful talent of the UCLA Philharmonia, Saturday’s program was performed entirely by professionals including, among others, the Lyris Quartet and several players from the Los Angeles Chamber Orchestra.

The most impressive of the post-post-modernist pieces was Phillip Golub’s exceedingly well-crafted Amtrak 71, performed with zest by Sarah Thornblade (violin) and Genevieve Lee (piano).

Pamela Madsen’s O Mary: Prayer for the Year of the Insane, based on an Anne Sexton poem, was by far the most intense. Performed by the members of the Lyris Quartet, the work varies between knotty complexities, moments of breathy spaciousness, and bow-scraping dissonances that could curdle milk.

Structure over emotionality was a major theme of the concert. Sean Friar’s Scale 9 performed by the six-member ensemble, Brightwork, established a basic building block then developed it into a set of Lego-like variations. Sarah Gibson equates the intriguing meanderings of her 2017 tiny, tangled world to a landscape of divided sections by David Hockney. But the most conflicted piece of all was Patrick O’Malley’s Abjodon Crest an amalgamation of jagged, unrelated moments like a jigsaw puzzle of ill-fitting parts.

Like islands in the storm, there were two pieces that went in a decidedly different direction. Eric Byers’s Sarabande (performed by the Lyris Quartet and Mike Vallero, contrabass) drew inspiration from Bach’s Fifth Cello Suite. Byers, a cellist himself and a founding member of the Calder Quartet, creates an evolving series of deep string sonorities in the slow dance form that elegantly evokes the spirit of Bach. Then in a second section, Byers creates a contrasting atmosphere in which ethereal harmonics create the sense of a starry firmament. Expertly performed, the piece was particularly effective within the intimate setting (and bright acoustics) of the church.

Far and away the most spirited and humanistic piece on the program was Malambo by the Uruguayan-born composer Miguel del Aguila. It was performed by the members of the New Hollywood String Quartet: Tereza Stanislav, violin; Rafael Rishik, violin; Robert Brophy, viola and Andrew Shulman, cello, joined by the virtuoso bassoonist, Judith Farmer.

The work’s musical influences are decidedly Latin American in flavor, with the bassoon leading the dance. As playful at times as an instrumental hare-and-hound race, in the composer’s words the music is meant to evoke, “the main square of a village in the Argentine Pampas where a celebration is taking place.” Festivities vie with reveries expressed through the songful role of the bassoon. It all ends with a gently swaying tango with distinct echoes of Astor Piazzolla.

It was nice to have a choral work, Fahad Siadat’s The Vast Sea, on the program. Performed by the six members of Hex, it stylistically incorporates nontext sound passages like African chants, with Siadat’s multipart setting of the title poem. The vocal lines range from unison harmonies to individual solo passages mixed with an occasional Manhattan Transfer-style syncopation.

Like all festivals, Hear Now is something of a candy sampler. And just like Forrest Gump’s chocolate box, you never know what you’re going to find.

Correction: As originally published, the review misidentified the composer of Amtrak 71. He is Phillip Golub, not Peter Golub, the composer's father.

The Passion of Ramakrishna was the main event in a concert that featured a piece by Glass mentor Ravi Shankar.