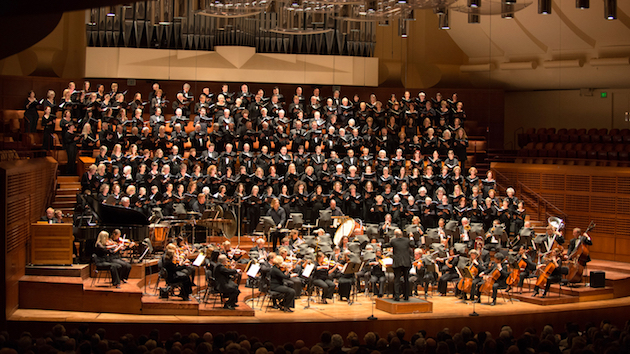 The San Francisco Choral Society, along with the California Chamber Symphony and the impeccable Ensemble of the Piedmont East Bay Children’s Choir, premiered David Lang’s teach your children and offered a performance of Carl Orff’s Carmina Burana at Davies hall this weekend.

Lang’s piece is a musing on what we, “as a nation, think are the most important things that we all need to teach our children.” To gather text for the composition, Lang used a search engine to auto-complete sentence fragments like, “we must teach our children to…” and “when I was young I learned to ...” While such a process may sound uninspiring, Lang’s careful use of the results and their thoughtful setting offered the audience a very contemporary exploration of a perennial topic.

Soprano Marnie Breckenridge began the piece’s short lines, beautiful smatterings, one at a time. The San Francisco Choral Society joined a few lines in, along with pizzicatos and, later, violins and winds echoing melodic fragments. Serious, thoughtful, and moving text (exhortations to “save money,” “to make wise decisions,” “to be brave”) lived alongside more light-hearted advice (“to brush their teeth”), drawing laughter from the audience. But the music began to take on a more somber tone, with ostinatos in low instruments and voices, denser textures, lines echoing from choir to soloist to orchestra, reiterated starting pitches and similar phrase contours for the short text lines piling upon one another. Lang affectingly set the text “to be safe” with brass and full choir: one of many poignant moments.

After an initial failed start with the orchestra, the second movement got underway with Breckenridge and the Ensemble of the Piedmont East Bay Children’s Choir weaving Lang’s question and answer texts seamlessly. Under the direction of Eric Tuan, the Ensemble was the vocal highlight of the evening, with perfect blending and lovingly precise timing in every phrase.

The heart of Lang’s piece, and the concert, was the third movement, structurally similar to the first with its short lines of text interjected with variably short silences. Lang formed a swell over the course of the movement, adding harmonic and textural density and brilliantly effective timpani and pizzicato strikes with the main syllable of each line, making for a buoyant and driving feel. Because each short line of text took on this musical form, it had an element of computational sameness, a “listiness” about it, but with the humanity of the content leaking wonderfully through. Line after line of relentlessly delivered oppressive truths were placed upon the imagined audience of children: “we actually don’t have a decent theory ... we seem to like some lies ... we don’t know.” As the movement ran out of text, Lang gave Breckenridge Gorecki-like lines, the texture thinned, and the cadence-free closing left us with “we all live our lives ...  we love.”

Carl Orff’s well-known Carmina Burana was eagerly sung by the choral society choir in the second half of the program. Unfortunately, the performance was undercut by slight imprecisions in attack onsets, offsets, and coordination with the orchestra that were smoothed over in the work’s louder and denser writing, but noticeable in the thinner textures of other movements. Far more distracting were the numerous staging decisions: Choir members wore odd hoods of different colors, soloists were strangely costumed, dancers walked down the aisles with unconvincingly painted props, the same dancers periodically emerged with ill-coordinated mixtures of gyration and folk dance, choir members clicked flashlights on and off and used turquoise ribbons to faux-flagellate themselves during bass-baritone Eugene Brancoveanu’s otherwise well-sung solo, “Dies, nox et omnia” (Day, night, everything). I was left wondering: why not drop the semistaged elements and select the group’s most successful movements for presentation?

The successful movements were joyous, thoughtful, and moving. Especially on point at every turn was the Ensemble of the Piedmont East Bay Children’s Choir. If they are not already on your radar, seek out their performances.